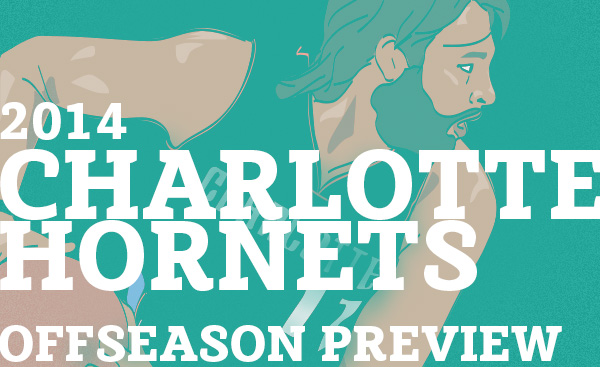 The Bobcats-era wrapped up with an emphatic BANG of a season that saw the team improve by more wins (22) than it won in total the season prior (21). Instead of trotting out a bunch of could-be’s and haven’t-beens to theoretically improve their draft position, Charlotte’s NBA franchise bucked the NBA’s current trend of tanking and revitalized a downtrodden fan-base in turn. Basketball is again something worth talking about in the QC and thanks to Coach Clifford & Company, the excitement won’t just be about a new coat of teal & purple paint.

Still, as fantastic of a season as it was for Charlotte, the first round sweep against the two time defending champs Miami Heat exposed some well-known flaws within the roster. Addressing those flaws while simultaneously building upon the Bobcats’ success will be the front office’s assignment as we head into the inaugural Hornets offseason. Wait, did I just type “building upon success” and “Bobcats” in the same sentence? #NEWWORLDORDER

STEP ONE: A Shooting Guard who can Shoot

I often found myself in the role of Lone Hendo Defender throughout much of the season. Having watched his development over the past five years – from a quarantined rook at the end of Larry Brown’s bench to a quality two-way NBA starting two guard – I was excited to see what Gerald could become on a good team. The answer was a resounding “passable“, a sometimes scoring, sometimes attacking, sometimes lockdown defensive shooting guard whose poor man’s D-Wade game just doesn’t work all that well on a team desperate for long range shooting. Like most of the Bobcats’ opponents this season, Miami smartly packed the paint and crowded Kemba Walker at the point of attack – knowing that the inevitable ball swing to the open shooter wouldn’t hurt them. That’s a problem.

Henderson doesn’t want to shoot off the catch at all – he’ll be wide open and hesitate before taking a bounce or faking a pass only to throw up a clanker out of necessity. His mid-post and iso games were made redundant once Jefferson was added to the mix and Hendo wasn’t able to transition his game over the course of the season to compensate. I like Gerald and think he gets an unnecessary bad rap from the fans but it’s obvious that he’s a bad fit on a Kemba/Big Al centered offense.

The good news for Charlotte is that there are a few options to remedy the issue either in the draft, free agency or via trade. With Portland’s 24th overall selection, the Hornets will likely have a shot at former Tar Heel P.J. Hairston (controversial, high upside), Duke’s Rodney Hood (safe, lower upside) or the UCLA SG prospects Jordan Adams (good mechanics, iffy results) and Zach LaVine (skinny and raw). None of these guys will step in and be instant All-Stars but could provide a nice boost in the limited role of floor-spacer.

Free Agency offers a couple of high priced young vets in Lance Stephenson (combustible, questionable fit) and Gordon Hayward. Hayward is probably the team’s ideal target as a sweet shooting, shot-creating big wing but he’s a restricted free agent that Utah says they want to keep and there’s rumored to be a long line of suitors should the Jazz change their minds.

One cheaper, under the radar alternative might be OKC’s Thabo Sefolosha. While Thabo’s not a shot creator like Lance or Hayward, he’s been a fantastic “three and D” knockdown guy for many years and shouldn’t cost the team more than $4 million or so per season. Although Sefolosha struggled with his stroke this season, he shot 40%+ from downtown in the previous two. Perhaps most importantly, Thabo won’t kill Clifford’s defense while he’s out there.

On the trade front, Charlotte’s has already been linked to Orlando’s Arron Afflalo (42% 3PTFG) via ESPN’s Mark Stein. Afflalo’s nearly thirty and only has one more guaranteed season on his deal – so don’t expect GM Rich Cho to give up much (maybe a couple of 2nd Round Picks) for Arron’s services – but putting Afflalo in teal & purple could provide an immediate upgrade for Charlotte’s distance shooting without having to break the bank short-term.

In an unexpected karmic re-balancing, Josh McRoberts has provided the answer to a long asked QC Hoops question: “What if Boris Diaw gave a damn?“ Unlike the bovine Segway Surfer, Josh brings maximum effort every game and is beloved by both teammates and fans alike for his abilities as a floor-spacer and distributor. One of the most unique players in the league, McRoberts functions often as the team’s spot-up shooting point guard in the half court, rarely creating for himself. Outside of Kevin Love, there probably isn’t a better fit for Charlotte’s offense with Kemba Walker still progressing as a traditional point and Al Jefferson desperate for floor spacing.

Retaining McRoberts, who will likely opt out of his two-year deal he signed last summer, is of tremendous importance. With an expected cap increase coming for all teams, expect Josh to command around $5-$6 million per season on the open market.

Ramon Sessions had his flaws: He was guilty of tunnel vision, he wasn’t a reliable three point shooter and he was a less than stellar perimeter defender. But he was light years less destructive for Charlotte than his trade deadline replacement, Luke Ridnour.

While Luke’s abilities as a traditional floor leader came in handy, he proved to a be a fantastically bad shooter (39%FG, 30%3PTFG) who couldn’t draw fouls and was a gi-normous liability on defense. Fans complained when Ramon’s second unit minutes became a constant barrage of head down drives. But at least “Sesh” turned those drives into trips to the line, easy layups or – at worst – short rebounds. Luke’s second units often devolved into hot potato on the perimeter until the shot clock forced a bad three or a Luke giveaway.

Fortunately, both Ridnour’s and Sessions’ deals expire this summer and Ramon has let it be known that he’d like to be back. That would be a-ok with me and it’s likely that some of his former detractors would welcome Sessions back with open arms after having been subjected to Ridnour for a few months.

Charlotte could also hit the trade or free agent markets looking for a fit. If Jameer Nelson gets bought out by Orlando (likely), Clifford would surely love to have him backing up and mentoring his height-challenged PG of the future. Philly’s Tony Wroten has his warts but offers an intriguing combination of size and potential – he likely doesn’t fit into the Sixers’ future plans with Michael Carter-Williams on the roster so could be made available for the right price.

Unrestricted free agent options includes guys like Greivis Vaquez, Rodney Stuckey and Mario Chalmers. Chalmers in particular would be an interesting signing as a spot up shooting, high-end backup whose acquisition would simultaneously weaken a division opponent.

The Bobcats have $6 million committed to the Bismack Biyombo and Brendan Haywood combo next season and neither is an ideal backup for Big Al. Biz is a complete non-factor on offense as well as a turnover machine and Haywood can’t even get on the court, having missed the entire ’13-’14 season with a foot injury.

In an ideal world, the Hornets could find a rebuilding team to take on Biz’s upcoming $3.8 million salary in a straight dump and use the space created either via free agency or trade to bring in a veteran two-way replacement.

One outside-the-box free agent pick is PHX’s Channing Frye – a legit “stretch five” 6’11” guy who can nail threes (37% 3PTFG on 5.3 attempts per game). Bringing Frye in with the second unit could open up the paint for more drive opportunities for guys like Gary Neal and allow MKG an opportunity to work in the post.

Regardless of who they end up with, Charlotte will need to figure out how to get Big Al some rest – he played 35 minutes a night for Clifford this season and is nursing a ruptured plantar fasciitis. Given his age (29) and body type, Jefferson would be better off decreasing his minutes down closer to the 30 per game mark. For that to happen, Cho will need to find a capable backup.

The Hornets can’t solely depend on outside help if they want to get better, their recent Draft picks have to grow as well.

Kemba Walker should spend the entire offseason working on his shot. As much as we love Kemba, 39% from the field just isn’t going to cut it. There were many nights this season where Walker’s 6-18 or 4-16 shooting actively hurt the team.

Conversely, Michael Kidd-Gilchrist might want to shy away from rebuilding a fundamentally broken shot and spend more time on developing a post-up game and maybe even add a floater or hook to his repertoire. Those skills could pay instant dividends, especially if the front office can add shooting around him.

Cody Zeller has voiced his concern about adding bulk, saying that it might hamper his speed and leaping ability. Fortunately, it’s 2014 and there are ways to add core, functional strength without bulking up too much. Cody needs to divide his time between strength training and the mid-range jumper all summer.

Jeff Taylor is a complete unknown at this point. He’s nearing 25 years of age and rehabbing a torn achilles. His shot was ok in theory pre-injury but produced horrific results in practice. He seems like a great young guy and we’re hoping for a full recovery for JT down the road but expectations should be kept at a minimum.

STEP SIX: Keep On Keepin’ On

Coach Clifford somehow turned Charlotte into a Top 10 defense in his first season and has said on multiple occasions that he’s just getting started implementing his advanced scheme. Since you can’t add systematic nuance with a complete roster overhaul, expect much of the Hornets core roster to remain the same. Upgrading the shooting guard position, retaining McRoberts, finding suitable backups for Big Al & Kemba and continuing the youngsters’ development internally will only vault the Hornets higher into the Eastern Conference.

Speaking of which, some have questioned if Charlotte has enough core talent on hand to compete for anything beyond a Playoff seed and those people are sort of missing the point. In the modern history of the NBA, no franchise has ever gone from perpetual doormat to champ and perpetual doormat is exactly what the Bobcats were for nearly all of their ten year history.

Michael Jordan, Cho and Clifford are building a culture of competent, competitive basketball. It may lead to legitimate title contention and it may not but for the first time in forever, Charlotte’s hoops franchise is worth the blood, sweat and tears of a fan’s investment. They will play hard, they will play smart and, for the first time in ages, they will make you proud to let the world know where your allegiance lies.