The Hornets have quickly established a reputation for building up big leads, then letting teams come back in the fourth quarter. Until this past Friday, all of those comebacks had resulted in Hornets losses. Finally, thanks to Kemba Walker’s layup, Charlotte was able to pull one such game out, giving me the perfect opportunity to go back and try to figure out what actually happened (I just couldn’t stomach watching the losses again). And so I present a punch-by-punch recounting of the fourth quarter of the New York Knicks at the Charlotte Hornets on December 5, 2014.

I went with the picture below description setup for this. I don’t know why, I might end up hating it. But for now, that’s what we’re working with. Some of the image sizes don’t quite work. Might have to go back and fix that later, but I wanted to get this out sooner rather than later. Just bear with me. I’m hoping to make this a consistent part of the site if people are interested.

Things did not start well. Pablo Prigioni brings the ball up, Melo uses a screen to get to the elbow and receives the pass from Prigioni who gives a slight jab left, then cuts towards Melo to take the hand-off. Pretty basic action, nothing special. Except Brian Roberts bites on the jab step and is left in the dust, completely unable to disrupt the hand-off in any way. 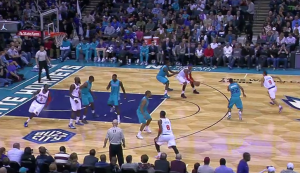 Because Melo is Melo (and probably a little of Marvin being Marvin), Marvin Williams has to stick, leaving Biz to rotate over and stop the Prigioni drive. Standard stuff. Except the rotations stop there. Quincy Acy casually walks to the rim, takes the dump off, and stuffs it home while Gary Neal and Lance Stephenson occupy the same space on the weak side. 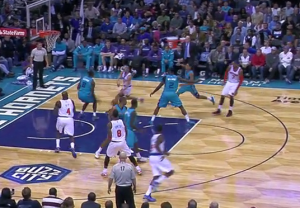 One of those guys has to help down to prevent that pass. It doesn’t happen. And here we go….

New York tries to run the same play with JR Smith and Melo this time. This time the hand-off gets disrupted. Biz helps on JR Smith cut then recovers to block Acy after Melo fires it down low. Beautifully done.

Next, Melo looks to exploit his strength advantage over Marvin Williams in the post. He backs him down, waiting for Lance to commit to the double team or to get deep enough to score. In the end, Lance doesn’t commit completely. He brings the double, but not hard enough to disrupt the kick-out, leaving an easy pass out to Tim Hardaway Jr for an open 3. 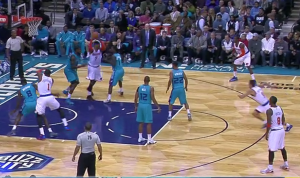 In classic Lance fashion, you get a little bad then you get a little good. After a couple pick and rolls, Amar’e and JR Smith try to ice one on the baseline. Biz reads the defense, drops off the pick, heads to the rim, and goes up high to throw down a great Lance read and pass. These guys are developing some really interesting chemistry worht watching. 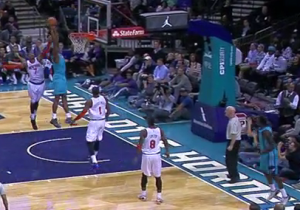 Really interesting stuff from the Knicks here. Try figuring this one out in an image. 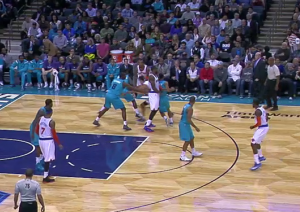 This is how it goes down. Prigioni kicks it to JR Smith on the wing. Amar’e comes and sets an off-ball screen for Prigioni right in front of JR Smith, drawing Biz with him just enough to stop him from getting back in time to contest Smith’s pull-up jumper after dribbling around Amar’e’s flipped screen. Gary Neal and Marvin Williams are stuck to Tim Hardaway on the perimeter and Melo just outside the paint. Nobody really did anything wrong schematically. Biz might have over-helped a little. Lance could have fought a little harder to get through the screen, but he recovered decently and crowded the shot without fouling. But keep in mind the goal of Clifford’s defense to prevent lay-ups and force the opponent into long 2’s. In that regard, mission accomplished. JR Smith just hit the shot. Can’t win them all.

Here Lance runs a pick-and-roll with Kemba. With a head of steam and only Amar’e Stoudemire between him and the basket he decides to pull up for a crowded long 2. It’s a decent look with much better options available. 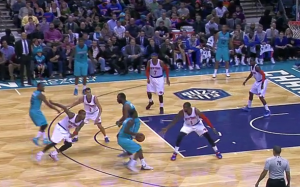 This set starts with a Prigioni-Melo pick and roll. The defense rotates properly, leaving Neal responsible for JR Smith and Tim Hardaway on the perimeter. He over-helps in the paint and ends up stuck in no-man’s-land guarding nobody. Hardaway for 3, buckets. 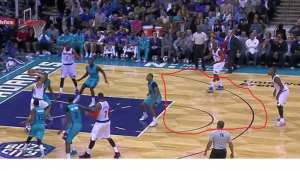 The next defensive possession was a bit of a disaster. It starts with a Prigioni-Stoudemire pick and roll. Jefferson has to lay back to compensate for his lack of foot speed, but he’s practically on the right block putting no pressure on the driver to make a decision while also forcing someone else to step up and bump Stoudemire. Williams does his job by stepping in front of the cut while Lance wanders up to the elbow, just watching the play develop. There’s really not that much space between Melo and Hardaway on the kick-out. Properly positioned, Lance could have at least contested a shot. Instead it’s another wide open 3 pointer for Hardaway and a single digit lead for the Hornets. This one really bothered me.

On this one, Kemba enters the ball Jefferson in the post, where he then holds the ball 4 seconds. He kicks it back out to Kemba, re-posts, gets the second entry pass, feels the double team coming, and kicks it out to Kemba again. Good so far. Wide open, Kemba hesitates, allowing the defense to recover, and throws up a contested 3. Short. Either shoot it our kick it, don’t hesitate and let the defense recover. This is one of the more frustrating possessions for me. Holding the ball, hesitating, stuck on one side of the floor…

After some pretty basic action, Lance gets the baseline and goes up with nothing but a lazy contest from Stoudemire in the way. Instead of going up strong, he wraps a pass around to Al, who probably gets fouled on his attempt, but ends up missing. Coach Clifford has talked about how Lance is a creator at heart, not an alpha scorer. It shows here. Yes, he should have just dunked the ball. But it’s just not his approach to the game so it’s hard to begrudge him too much. What I will criticize is what happens next. Frustrated with someone (Himself? Al? The ref? No clue…) he proceeds to foul Melo in the backcourt for no reason. What makes this so egregious is it put New York in the penalty. Melo gets 2 free throws, a reward for doing nothing but dribbling the ball up the court. These are the things that lose you games in the fourth quarter. You just can’t be giving points away. 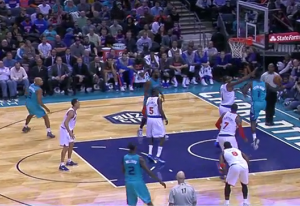 I would argue this is where the team started to tighten up. Kemba dribbles up the court, turns down a Jefferson pick, and takes an extremely difficult floater with 4 defenders around him and 13 seconds on the shot clock. You have to find a good shot here. This one was little more than a prayer. The spacing isn’t great, but Kemba’s not really helping things by short circuiting the play so quickly. Up until this play and the foul right before it that cut the lead from 10 to 8, Charlotte was withstanding a run of 3’s and tough shots and keeping the Knicks at arm’s distance. With 2 free throws and a really difficult, contested mid-range jumper from Melo, it’s a 6 point game with 2:49 left and the Hornets have put themselves in a position they didn’t need to be.

The next section of the game goes as follows: Henderson hits a tough elbow jumper after the ball moves around the perimeter a couple times; With the Knicks extra small and Jefferson as the back line defender, the Hornets get spread out, Kemba gets enveloped by a Stoudemire screen, Henderson has to take an extra step in to stall the drive (perhaps unnecessarily, considering the ball-handler), and JR Smith is wide open in the corner (see pictures below); Following some non-threatening movement on the perimeter, Jefferson gets his look on the block against Stoudemire, fails to feel the defense collapse on him, and turns the ball over; Melo isolates at the top against Williams and hits a pull-up 3 that everyone, including Dell Curry, knew he was taking.

On the Hornets next to last possession, holding a 2 point lead, Clifford designed a play to get Jefferson a look on the block. It starts with some decoy action including a cross screen for Henderson and a pick and roll with Kemba (1). This is just a ruse to get Jefferson down on the block by swinging the ball to Henderson while Al sets up (2). It’s pretty basic, but you can see in the second picture that Stoudemire failed to recognize Al’s cut in time. He was getting to that block either open or with Melo switching down onto him. But that’s not what happened. Prigioni sniffed it out and got a finger on Kemba’s pass to Henderson. This sent the Hornets into scramble mode, somewhere a team like this doesn’t excel. It all adds up to a horrible runner from Kemba that never had a chance. A solid play by Clifford, but credit to the Knicks for making things difficult. 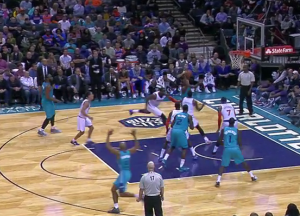 We all know how it goes from there. Kemba tries to draw a charge on Prigioni but doesn’t get the call. Marvin jumps at the Prigioni pump fake, inexplicably leaving Melo wide open for 3. Buckets. The Hornets got some really nice movement coming out of the timeout leading to a wide open baseline jumper for Jefferson that he just misses. The beauty of the design was that it left time for one more possession if needed. 2 chances is always better than 1, especially when you can get such a solid look on the first possession. This was followed by a beautiful defensive possession that led to a difficult shot from Melo that clanged off the rim.

After all that, the Knicks gave the game away. 4 seconds left and a foul to give, Derek Fisher throws in Pablo Prigioni, JR Smith, Tim Hardaway Jr, Melo, and Stoudemire. No Iman Shumpert, no Sam Dalembert. Maybe he thought they were still on offense? They don’t take the foul, Kemba gets a clean line to the basket, and he hits a difficult shot around Stoudemire. Ball game.

Re-watching this game gave me a different perspective on what happened. The way I remembered it, with no ball movement and awful defense, is an oversimplification. There were definitely defensive breakdowns and some poor offensive plays, but nobody runs things perfectly all the time, not even the Spurs. Guys missed some wide open shots that they normally make. The Knicks caught absolute fire from 3. Melo hit some tough shots. That’s not to say there aren’t things within their control the Hornets could have done. They gave the Knicks the avenue to come back. But with no MKG, there’s nobody strong enough and quick enough to check Melo. Al just isn’t a rim protector, so when a team goes small with shooters you have to pick your poison. Charlotte’s margin for error is so slim, mostly because of roster construction. Cho is trying to fix that, but it’s often easier said than done.