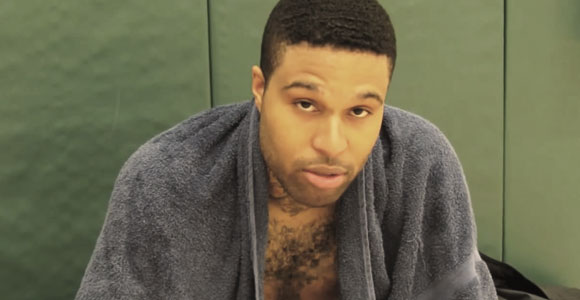 The Baseline reached out to trainer and video coordinator Raphael Barlowe, creator of Chris Douglas-Roberts’ web-series “I Am Not a Star”, to uncover more details about CDR’s hard-fought return to the NBA:

BB: The documentary project takes place over a span of years, offering an intimate portrait of CDR’s personal journey back to the NBA. How long have you known CDR and what was your ultimate goal in producing the videos?

RB: I met Chris in November 2012 when he first signed with the Texas Legends of the D-League, so I’ve only been part of his journey back to the NBA for the past 14 months. I’ve always had an interest in the behind the scenes aspect of the lives of NBA players and Chris was the first person I approached about creating a web series. At first he seemed hesitant because he really did not know me and he was not where he wanted to be in his career. A few weeks later he had a 49 point game in his D-League debut and since I was video coordinator for the team, I was the only one who had footage of that game. I edited the video and sent to him and posted the link on Twitter. A few hours later it had around 5,000 views. To my surprise, after he was released by the Mavericks he sent me a text and agreed to shoot the web series. The ultimate goal was to tell his story and also show that he was high character guy off the court. Often people may see pro athletes and tattoos and it gives off a negative stereotype.

BB: In many ways watching a player like CDR’s journey to the league is much more dramatically interesting than, say, an annointed Lottery pick – those stories are rather straight lines, Chris’s path is filled with lots of twists and turns. Did you have any idea that Chris’s story would play out like it did?

RB: Yes. I knew he’d get back to the NBA and I felt like if given the right opportunity he would succeed. The whole web series might have a total different feel to it if he never made it back. I have nothing against playing overseas, but the series was all about his journey back to the NBA.

BB: CDR has been praised by the Bobcats for his maturity. Part of that you illustrate through his humbling experiences on the league’s periphery. The doc also introduces us to a young a family man. How much of CDR’s success do you think is owed to his personal responsibilities as a father?

RB: I think his responsibilities as a father play a huge role in his recent success. Last summer when things were not looking so good he posted a picture of him working out on his Instagram with the caption “If I quit what is Corleone (his son Vito’s nickname) gonna think of me? Anyone who knows Chris knows his kids are his everything. We’d workout until 3am and he’d still get up around 7am to feed his daughter breakfast. 20 years from now, he’ll be able to tell his kids his story about how dedicated he was to his craft and how they benefitted from his hours in the gym. 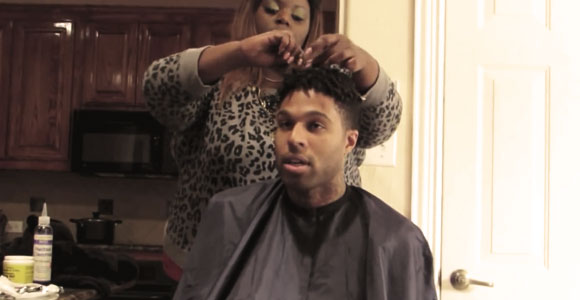 BB: Bobcats fans and the local media keep asking about Chris’s hair but he explicitly answers the question in episode three: “The universe just took me to this”. (Great quote btw) I feel like this could be an alternate title for the series or maybe the name of the sequel. Do you feel CDR’s quest to be different, to be an individual, has translated to his game in any way?

RB: I think his game has always been different. Even when I did not know him personally and just watched him at Memphis, I noticed he had an unorthodox game w/ the high dribble, floaters from odd angles and he played like a lefty. He was never considered a ‘shooter’ or a great athlete, but he was known as a scorer because he was so crafty. So the hair just fits into his unique individual style that matches his game and how he dresses off the court.

BB: My favorite thing about the series is that it shows us yet again that most non-star pro athletes are just regular dudes with mostly regular lives. Sure, CDR rolls up to a fast food drive thru in an Italian sports car but he also has to take care of crying babies, go buy diapers, take his girl to The Cheesecake Factory, etc. Was this an explicit intention of yours, to show the everyday, banal side of a pro ballers’ life?

RB: Yes. I wanted to show a side of players that nobody sees. Maybe things would be different if he was a mega star like Lebron or Durant and had a max contract with commercials airing all day long. He probably would not be able to go to the store and buy diapers as often as he does. Even to my surprise he lives a very, very normal lifestyle. After games he can be seen loading the kids in the car, going to birthday parties at Chuck E Cheese and watching Yo Gabba Gabba and other kiddie shows on Nickelodeon.

BB: As his trainer, how do you feel about CDR’s vegan diet? He looks noticeably leaner now than a few years ago. Do you think it has helped his game?

I personally so not know much about the vegan diet, but he says he can feel the difference and he’s never tired. He looks as if he can play 48 minutes per night at a high level. I do not know if its the diet or what, but it is working and paying off.

BB: “Never turn your back on the grind” – basically sums up the theme of the entire series. We see Chris struggling to find his way back to the league early on but his faith in “the grind” – it’s like a mantra – eventually manifests it’s way into Chris’s reality with the Bobcats. Is this common philosophy amongst guys trying to get into the league or is this trait special to CDR?

RB: That’s a tough question. I think everyone who’s trying to get in the NBA feels they are grinding and working hard. However, I think what Chris calls “the grind” may be insanity to others. We worked out twice per day for 5 days per week from February through the NBA Summer League. My brother and I kept track of his makes and misses and he’d easily make 200- 250 shots per workout. He’d go home and sit in an ice bucket to prepare for the next midnight session. I’m sure experiencing the NBA lifestyle then going to Europe and D-League added some fuel to his fire, but I do not think you just pick up that type of work ethic along the way. I believe he’s always had a work ethic, he just took it to a totally different level. Even now that he’s back in the league and playing good minutes, he brought me out to Charlotte so we could work on his off days. 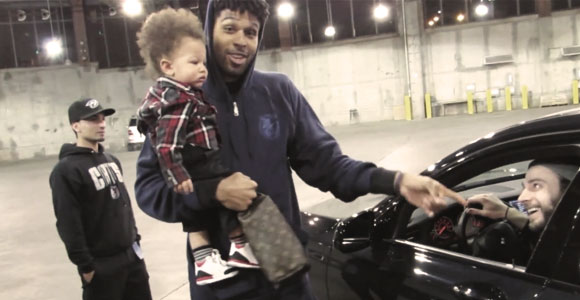 BB: My fave moment comes in episode 4 where CDR is watching the insane McRoberts behind the back pass and can’t believe a 6’11 guy could make that play, calling it “magical” – hilarious because it was Chris himself who had to finish the play on the other end. What is your favorite moment in the series?

RB: I would have to say going to Memphis with him was my favorite moment. I knew he was a big deal in Memphis, but I did not know he could run for mayor. LOL. The minute he walked from the hotel to the FedEx forum the fans were all over him. He probably signed a few hundred autographs and took even more pictures. What I did not capture on the episode was we ran into his old AAU coach from Detroit. He gave me insight on Chris’ background and mentioned how proud he was to see Chris where he is today as person, father and basketball player.

BB: It’s been reported that Coach Clifford’s familiarity with CDR is what ultimately landed him in CLT. How did Chris make such an impression on Clifford during last year’s Lakers camp?

RB: I did not know Chris at the time, but I’m assuming Coach Clifford saw the same things Kobe Bryant saw during camp. I remember reading reports about Kobe being impressed with his game. Chris has mentioned he felt he was one of the best players in that camp, but for whatever reasons the Lakers chose to go in a different direction. Fortunately for Chris, Coach Clifford took notice.

BB: CDR has never shot over 32% from three in an NBA season. He’s flirting with 40% with CLT. Three and D guys are valuable in the league. Can he keep this up?

RB: I believe he can stay around the 40% mark. He set a goal to shoot 40% from 3 last summer and he’s very close to achieving it. Lately teams have been closing out hard on him and he’s shooting a lot more contested threes. We go to the gym and put up a couple hundreds 3’s on his off days, so I’d like to think the percentage will increase next season. He made 25 3’s in March compared to only 32 in his previous 4 seasons combined.

BB: Bonus Question. How did you become involved with the Texas Legends? I find it an interesting coincidence that CDR arrived via a team now operated by former Bobcat Eduardo Najera. Also, I have to ask, as a Legends guy what are your thoughts on PJ Hairston’s NBA future?

RB: I joined the Legends in 2010 as an intern. I had to do a lot of the grunt work and odd jobs like drive the team van and wash laundry to earn respect and trust of the staff. I eventually worked my way up to video coordinator and a basketball operations title. I was not as involved this season as I had been in years past, but I’m still involved in a small capacity and the team has given me the freedom to spend time here in Charlotte.

I think PJ has a shot to be a first round pick. He put up good numbers in the D-League and even had some 40 point games. The talent is there and I think where he ends up in the draft will depend how well he handles the interview questions from his Carolina days.

Special thanks to @Barlowe500 for the interview. Watch the entire four part series “I Am Not A Star” here.

One thought on ““Never Turn Your Back On The Grind””