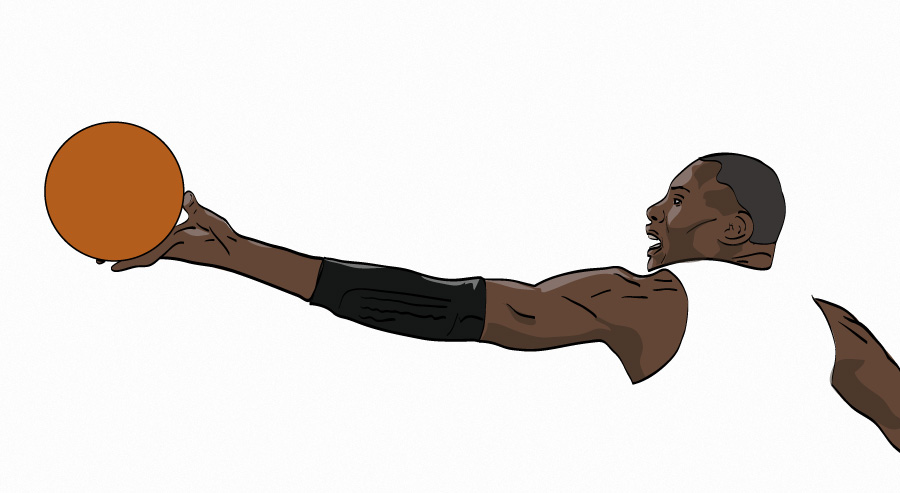 Picked seventh overall in the 2011 Draft, Bismack Biyombo entered the league with high expectations. As the championed prospect of former OKC exec and current Cats GM Rich Cho, “Biz” (founder of #biznation, brother to Billy) was immediately compared to another shot-swatter from the Congo, Serge Ibaka.

Three years later, Biyombo has certainly lived up to the comparison from a shot-blocking standpoint. His per 48 block numbers trail just behind Serge and he’s the only player in the league to average at least a swat per game while playing less than 15 minutes a night. It’s a near guarantee Biz would rank amongst the league’s Top 5 shot-blockers if he were playing starters minutes.

The problem, of course, is at the other end. While Serge has moved his gorgeous jumper further and further out to the three point line, Biz still has trouble finishing anything outside of a dunk – that is if he hasn’t fumbled the ball first. Despite extremely limited touches on offense, Biyombo’s turnover rate is twice as high as Ibaka’s and nearly three times the rate of Josh McRoberts – a guy who’s constantly handling the rock. When it comes to protecting the basketball, Biz is less Ibaka and more Kendrick Perkins.

Turnovers are a major no-no for coach Steve Clifford so it’s no wonder the staff was looking forward to Brendan Haywood’s eventual return. While Haywood isn’t nearly the shot swatter Biyombo is, he’s also not going to give the ball away immediately after touching it and offers just enough post scoring so that the team doesn’t have to entirely change the way it plays when Big Al goes to the bench. He’s also a better system defender than Biz – just check out last years defensive on/off court numbers – Mike Dunlap’s Bobcats gave up ten points per game less when Haywood subbed in for Biyombo.

The size of the gap is probably an aberration given the coaching misadventures and Biz’s youth but there is a very real story buried in those numbers. Clifford’s gushing comments about Haywood’s past exploits last summer weren’t lip service. Had he been healthy this season, it’s likely Brendan would’ve taken Biz’s spot in the rotation.

Points at a Premium

If you haven’t heard, the Bobcats have a hard time scoring. They’ve played better at that end since the All-Star break but against a good D, the late game offense generally devolves into a triple teamed Al Jefferson with Kemba Walker left to improvise. In order to stay in close games, Clifford relegates Biz’s fellow one-dimensional phenom, Michael Kidd-Gilchrist, to the bench in favor of a good to league average three point shooter (Anthony Tolliver, Gary Neal or Chris Douglas-Roberts) just to keep the opposing wing defenders honest. MKG can at least catch a ball and do a few things with it once he has it – so if he’s sitting, you know Biyombo’s not sniffing crunch time.

All of which brings us to the premise of the post. Despite the strides Biyombo has made over the last few seasons, there’s essentially zero chance that he’s in their long term plans for the following three reasons:

1. Al Jefferson. Big Al’s the most talented player in franchise history and has at least 4-5 solid seasons left in him. Thus, the starting center spot is occupied for the foreseeable future and you can’t play Al & Biz together. Next.

2. MKG. Unless you like watching 3 on 5 hoops or want to lose a ton of games on purpose, you absolutely can’t play MKG and Biz together in the same lineup. Since Big Al’s return from an early season ankle injury, MKG and Biz have barely logged any minutes together. Clifford’s no fool. If the Cats keep either long term, it’ll be MKG.

3. Money. Two off-the-court comps for Biz: Derrick Williams and Evan Turner. As a high Lottery pick, Biz is due $3.8 million next season and after that, the team would have to extend a $5.2 million qualifying offer as the first step towards restricted free agency. So yeah, it’s not gonna happen. Just as Williams’ and Turner’s contracts spooked their respective teams into abandoning them this season, Biyombo’s looming free agency and disproportionate cap hold will likely jettison him to another team as soon as a decent opportunity presents itself.

So where exactly would that opportunity be? The team acquiring Biz would ideally be both offensively advanced and in desperate need of a rim protector who doesn’t have to score. Dallas, Portland and Golden State immediately come to mind as potential candidates. Unfortunately the Warriors have serious cap issues and another raw center (Festus Ezeli) returning from injury next season. The Blazers practically have a stable of developing young could-be bigs at the end of their bench. But Dallas…oh yes, Dallas. I think we might have a match!

“Nah Biz, just set this pick and get the hell out of the way. We’ll take care of the rest.”

The Mavs are practically starting Old Biz now, with veteran Sam Dalembert occupying much the same role. Biyombo’s directive would be clear and simple: Get rebounds, dunk putbacks and block shots. Sure, he’ll still have to improve his hands and figure out how to not foul out of games before halftime but once he does, Big D could be Biz’s ticket to a big payday.

So what would Charlotte receive in a Biyombo to Dallas trade? The Mavs don’t have a first round pick to trade until after the Draft (when they’ll likely send it to OKC) – and no one in their right mind would pay that high a price anyways. What Dallas does have is Boston’s 2014 2nd Round pick. As of today, that’s the 34th overall selection in the Draft and with a deep class on the way, Charlotte could find an intriguing guy who slips (Isaiah Austin, James Young, Mitch McGary) or a Euro “draft & stash” prospect for the future. Best of all, the Hornets would save around $3.2 million in the deal – giving them the ability to find a two-way veteran backup on the cheap (ala Golden State with Jermaine O’Neal).

And really, from an “asset” perspective the trade would basically be a wash. Remember that Cho originally traded up from 19th in order to pick Biyombo at seven for basically no cost (unless you count an angry Stephen Jackson as an asset). Swapping a late first for the 34th pick in a deeper draft a few years later is hardly the worst thing that’s ever happened to the franchise – and the real mistake of course was passing on Kawhi Leonard, Klay Thompson and Nic Vucevic on Draft night back in 2011.

In the meantime, let us enjoy our remaining time with Biz, soaking in his incomparable likability, his endlessly entertaining tweets and his tenacious effort each and every time he steps on the court. After all…

If the whole world was bling how many people should you impresse? pic.twitter.com/5jf0GQy5mv

ALL YOUR BLOCKS BELONG TO BIZ!