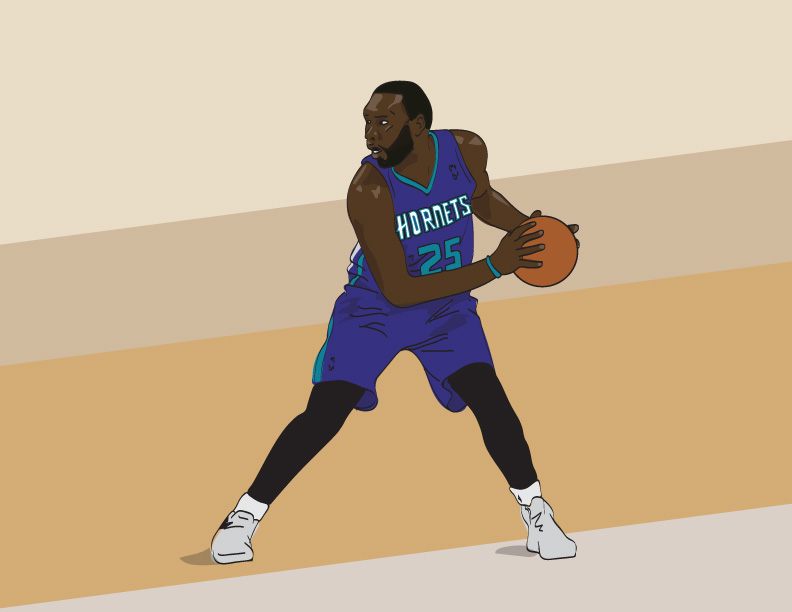 Big Al Jefferson. He is a plodding, slow-to-react defensive liability. He hesitates to pass out of doubles. His mere presence throws the games’ pace back to the mid–90’s. And he’s by far the Hornets’ most important player.

This is not up for debate. Why? Because the other team actually has to scheme for him. He’s Disruptive with a capital D. There is literally no other player on Charlotte’s roster who inspires this sort of effort from an opponent. As young and promising as some of the Hornets’ prospects are, no player outside of maybe (fingers crossed) Noah Vonleh will ever put this type of pressure on a defense. It’s a simple fact.

We all love Kemba Walker. He’s the definition of gritty & tough but his style of play inspires little fear in the opponent. He can’t consistently kill you in the paint – either on the dish or the drive – and he’s at best a mediocre three point shooter. Walker does most of his damage on iso fall-away two’s and the occasional spotup three. In fact, it’s better for an opponent if he’s hitting those shots because he’ll get tunnel vision. “Please, play the poor man’s Iverson game,” opponents beg. It’s pretty low efficiency stuff and easy to defend. Remember that Gerald Henderson and Kemba ran this type of show together back in 2012–2013 as a “promising young backcourt” that averaged a combined 32.5 points per contest and won 21 games all season.

Opposing teams will live with guys like Kemba, Gerald and Gary Neal going for a team high 28. Keep them outside of the lane and you’re good. None of the Hornets’ complementary scorers are exceptional three point shooters and none of them can force their ways to the bucket. Rudimentary pro defense can stop that. But a healthy, engaged Big Al is dangerous. He will get your bigs in foul trouble with pumps and fakes on the low block. He will command double teams. He will hit sixty percent of his shots from the low block. If he goes for 30, the Hornets have a legitimate shot of beating a good team. Opponents have to stop him.

Big Al is a prime example of why this league is all about Disruptors: Guys who do things opposing defenses don’t want or aren’t prepared for them to do. There are many Disruptors out there and most of them are superstars: Lebron, James Harden, Russell Westbrook, Kevin Durant, Dirk Nowitzki, Tony Parker. But there’s also guys like Kyle Lowry, Big Al and Kyle Korver. Players who specialize in dominating either of the two zones modern NBA defenses are setup to protect at all costs: the rim and the three point arc. Check out the following shot charts: 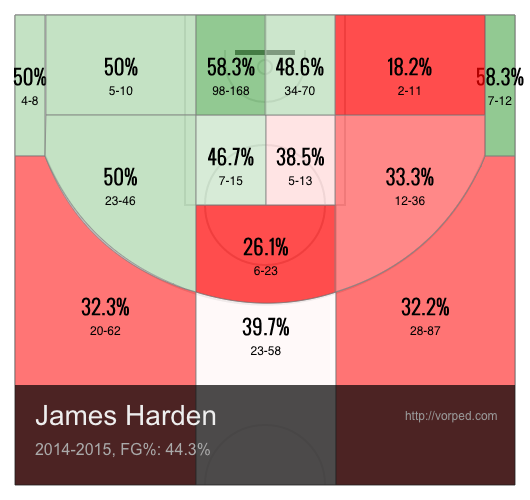 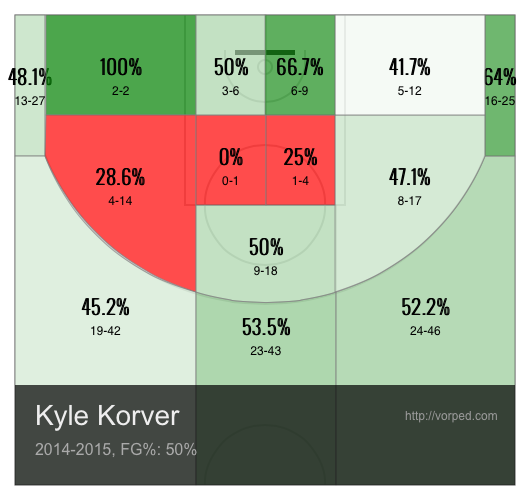 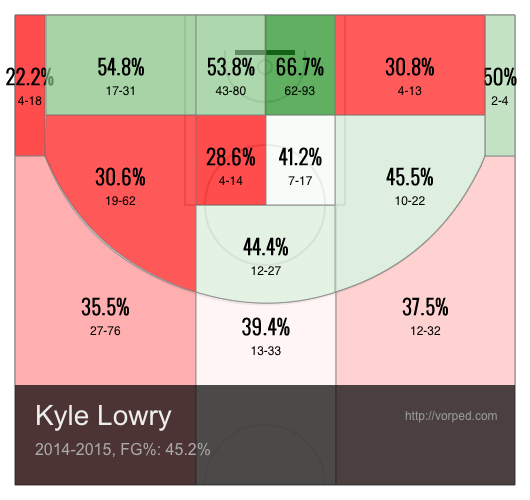 Now check out Kemba and Gerald: 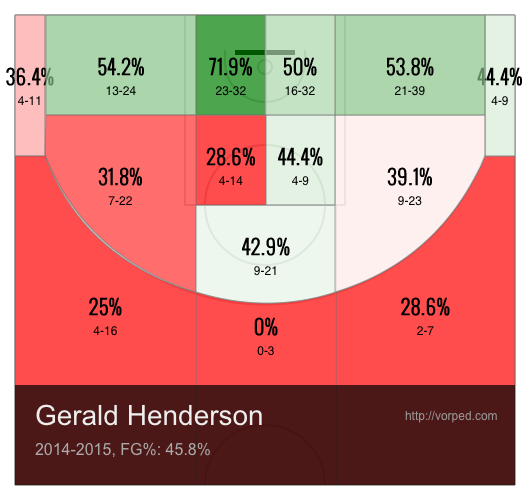 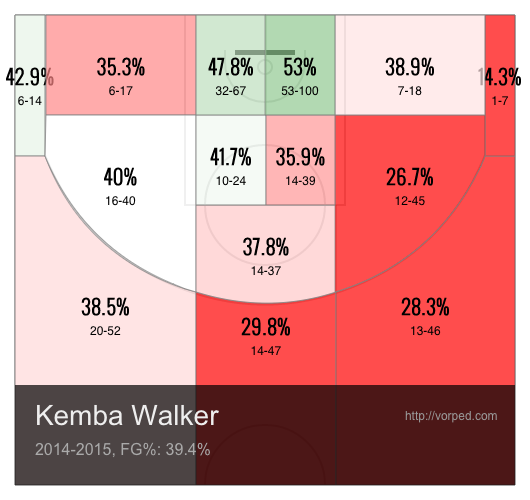 Sure, Gerald hits a high percentage once he actually gets inside but because he can’t shoot, the defense sags off and prevents the push into the lane. Same goes for Kemba’s poor numbers. Even with his improved three point percentage in December, teams are hardly running Walker off the line. And once Kemba gets into the paint, a good defensive opponent will live with sub-50% finishing at the rim. The ugly truth is that none of the Hornets secondary “threats” are worth losing sleep over defensively.

Build Around the Disruptor

Both Atlanta and Toronto have played it smart. Even though their Disruptors are minor stars, they’ve built entire systems and rosters around maximizing their Disruptors’ advantages. Atlanta has emphasized crazy offensive rotations and ball movement to free up all of the other shooters around Korver. The Hawks have added size, length and toughness inside, at the wing and at the point of attack to neutralize Korver’s average abilities at the other end. Lowry is a bowling ball that wreaks havoc in the paint and he’s upgraded his ability to find shooters on the dish. The Raps have also surrounded Lowry with long, organized defenders and big, rangy backcourt mates who’ve now been together as a group for nearly three seasons.

If the Hornets are going to build around Big Al’s Disruptive force, they’ll need to go back to the three keys that made his game so effective last season:

This is the point where you say “Al Jefferson is old and is limited, why build around a guy like that?” First of all, he just turned 30. Second, he’s logged under 23,000 career minutes. Keep in mind that Lebron is the same age and just crossed 40,000 (which doesn’t include stints playing for Team USA).

More importantly, if the Hornets don’t build around Jefferson, who will they build around? Kemba? We’ve already covered that topic. He’s at best a complementary semi-star. MKG? Again, a nice glue guy but he’ll never force an oppenent to alter their scheme. Cody? Too passive and is a terrible finisher at the rim. Complementary role player.

Outside of Big Al, the Hornets have exactly three shots at finding another Disruptor over the foreseeable future:

So this is where we are in 2015 with this Hornets team. Like it or not, Charlotte’s fortunes are tied to Big Al. And if they want to take advantage of his prime, they need to get everyone on the same page (coaching, front office and ownership) and do something about it now.