As the deadline came and went, there were some who said Charlotte needed to make a move if they wanted to make the playoffs this year. They did so, acquiring Courtney Lee in exchange for PJ Hairston and Brian Roberts, a move that clearly makes the team better. However, a trade is not what is going to get the Hornets into the playoffs. Health is the most important factor.

It’s easy to remember that the Hornets struggled in January, going 6-11. It’s also easy to get caught up in the MKG injury after such strong individual and team performances during his 7 game cameo. It’s also easy to forget that, in November and December, the Hornets were a top 10 unit both offensively and defensively.

A quick look at Charlotte’s lineup data on nba.com’s stats page, sorted by minutes played, shows 9 out 10 lineups with strongly positive net ratings per 100 possessions. Ignoring the MKG lineup, every one of these lineups includes at least one of the Batum/Lamb/Lin trio that struggled with injuries throughout January.

The same information for just the month of January hammers home the importance of health for the Hornets. Despite playing 17 games in January, no individual lineup appeared in more than 7 games. The typical non-Al Jefferson starting lineup maintained a positive +6.6 net rating. Meanwhile, lineups missing Batum and featuring PJ Hairston at the 3 along with Kemba and Lin were atrocious. 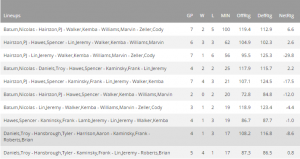 The human mind has a tendency to over value the most recent results, in this case January results and the MKG injury. This is what’s known as recency bias or the recency effect. But a step back reveals the Hornets should be fine in the stretch run as long as they stay healthy. This is a good team with a good coach and good players. When all of those pieces are allowed to work as intended, the results speak for themselves.

One thought on “Health is the Key to the Stretch Run”