A few years ago someone forwarded me the now famous picture from the 1992 All-Star Weekend featuring a young Steph Curry with his father Dell, Mitch Richmond, Drazen Petrovic and Don Nelson.

My first reaction was “that’s neat, I remember watching that three point contest”. I right clicked and saved the pic to my Bobcats Baseline Dropbox folder and moved on.

A couple of years go by and I see the pic again in a random tweet. The photo hits me different this time. I linger. I stare. What am I looking at? There’s something about this picture; something deeper, something odd.

Let’s start with the obvious. Take a look at Steph’s jacket. At first glance, it looks as if he’s wearing a junior Hornets warmup of some kind: teal with purple accents just like his dad sitting behind him.

But Steph’s jacket features a third color, a gold-yellow. The original Charlotte Hornets never wore this color and the franchise would only incorporate anything remotely approximating this hue upon their move to New Orleans a decade later. 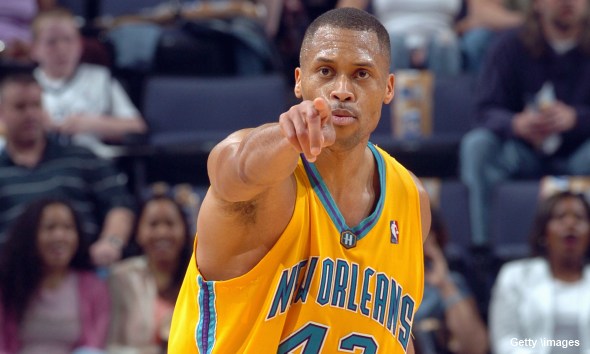 The New Orleans Hornet gold was more of a mustard-turmeric yellow (see the PJ Brown image above) and not the bright, sunshine gold featured in Steph’s ‘92 jacket. Have a look at the image below and compare the three dots at the left side of Steph’s name and number. 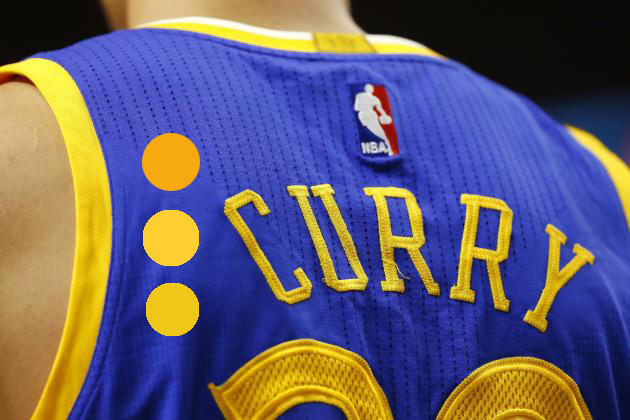 The first dot is a sampling of the New Orleans Hornets mustard-gold. The second and third dot are samplings of the hue found in Steph’s ‘92 jacket and the hue found in the jersey pictured. Only a highly trained colorists could spot the difference. They’re virtually the same.

In fact, I would argue that they ARE the same color. Steph is wearing Golden State gold at the 1992 All-Star Weekend. Weird.

But he’s also wearing Hornets colors, right? Half right. While Steph’s purple is nearly identical to the Hornets version, take a closer look at his dad’s warmup behind him. It’s a classic Hornets powdery teal and quite a bit different from Steph’s more “electric” blue.

The hue doesn’t match the current Hornets teal either. It does however match Steph’s favorite football team’s blue. 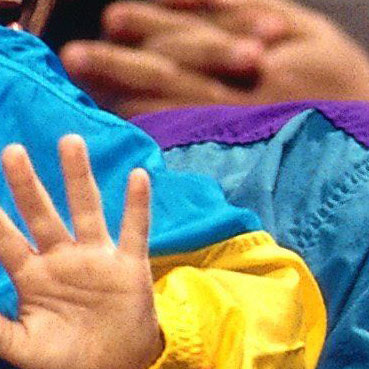 This makes sense, right? Dell and Sonya decided to drape Steph in a combination of Hornet purple and Panther blue. Except there’s one problem. The NFL wouldn’t award Charlotte an expansion franchise until October of 1993 – a full twenty months after the photo was taken. 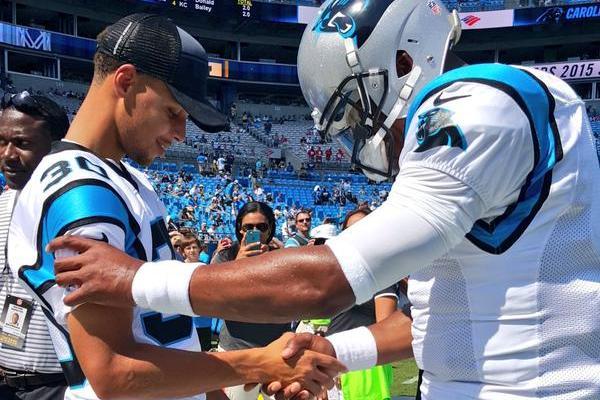 An odd coincidence, isn’t it? That a not quite four year old Steph Curry is wearing the colors of his future NBA team, his father’s NBA team and his beloved hometown NFL team that had yet to exist.

The strangeness only begins with the colors. Let’s look at the composition and subjects in the frame.

First, let’s work our way west to east across the photo. Seated up and to the right of Dell and Steph is longtime NBA head coach (and former player) Don Nelson.

At the time of the photo, Nelson was in the midst of his most successful season as conductor of the three-point happy, fast-paced “Run TMC” Golden State Warriors.

Actually, that last sentence isn’t entirely accurate because the “M” in the “TMC” no longer played for Nelson’s Warriors. The sharp-shooting former Golden State team captain is seated just to the right of Nelson, dressed in his Sacramento Kings warmup.

Richmond had been traded to the Kings just months prior to the photo, breaking up the Dub’s most promising core in decades. The Warriors would have to wait another twenty years to assemble a team of gunners as deadly as Richmond, Tim Hardaway and Chris Mullin.

Before we get to Petrovic, let’s take a look at the eye-line dynamics going on in this photo: 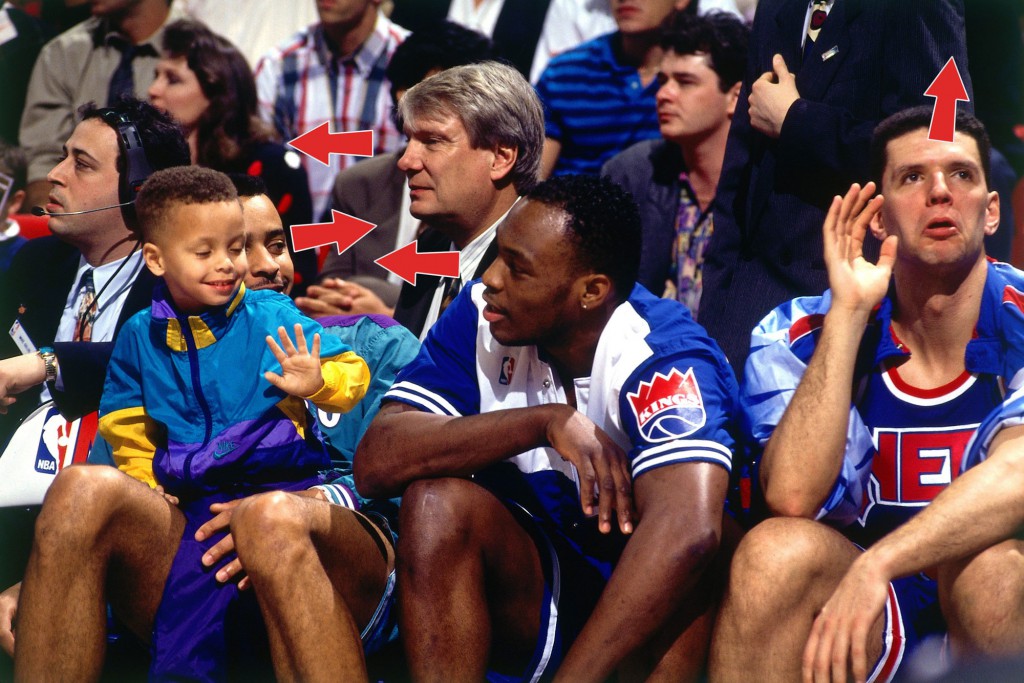 We can see that Coach Nelson is gazing left, a calm smile resting on his face. He seems both at peace and optimistic at what he sees in the distance.

Richmond is also amused and impressed at what he sees out of frame; in fact, he seems relaxed by it.

Dell’s eyes are wide and giddy; his smile barely hidden by Steph’s left shoulder. He’s the only one in the frame looking right (east). It’s as if there is no need for him to gaze left; he has already seen what the others are now experiencing.

Steph’s eyes are closed; his hand is raised, with five fingers extended. More on this later.

At the far right of the frame we have the late, great Drazen Petrovic. The European Michael Jordan of his time would pass away tragically in a car accident less than two years after the photo was taken.

During the ’92 AS weekend it was Drazen’s mom who was tasked with looking after young Steph while Dell was busy in Orlando. Decades later, Steph would send his game worn Finals jersey to Petrovic’s mother to hang in her son’s museum in Croatia. It’s a great story.

Let’s get back to the photo: notice that Drazen is the only one looking upwards. His hand is cupped near his mouth in a way one would amplify a shout. Or maybe it’s cupped towards his ear in a way to better hear a message?

Is Drazen receiving a message from above? Has he already heard the message and now wants to announce it to the world? What are Nelson and Richmond seeing to their left (other than Steph)? Why is Steph holding up five fingers and why are his eyes closed? Is this all some kind of crazy coincidence? Am I reading too much into this photograph?

It gets weirder. Seventeen and a half years after 1992’s NBA All-Star Weekend, Steph Curry would be drafted by the Golden State Warriors. His first head coach as a pro? 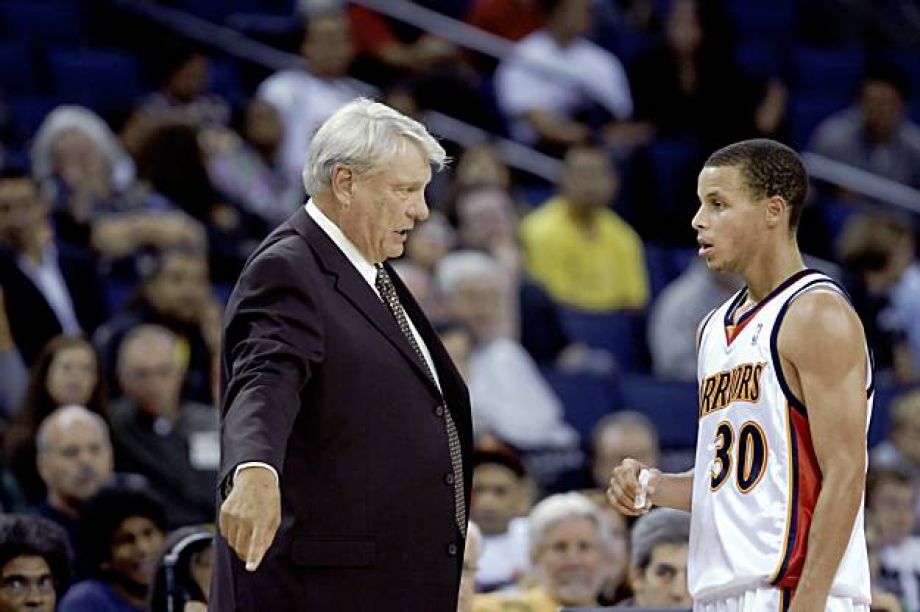 This we know for certain: the ’92 All Star image has already correctly predicted Steph’s current NBA team, his ability to impress even the league’s greatest three point shooters, his favorite NFL team and his future head coach.

But what about those five fingers? What do they represent? Steph currently owns two league MVP trophies. Adding three more would tie Curry with Michael Jordan for second most in league history. Steph currently has one championship to his name – four more between now and retirement seems possible given the Warriors’ current super team status.

There is also the question of whether the purple in Steph’s jacket represent his father’s pro lineage or predict a future stop in Charlotte at some point later in his career.

Finally, why are young Steph’s eyes closed? What image is in his mind that could generate such a confident smile? My best guess… 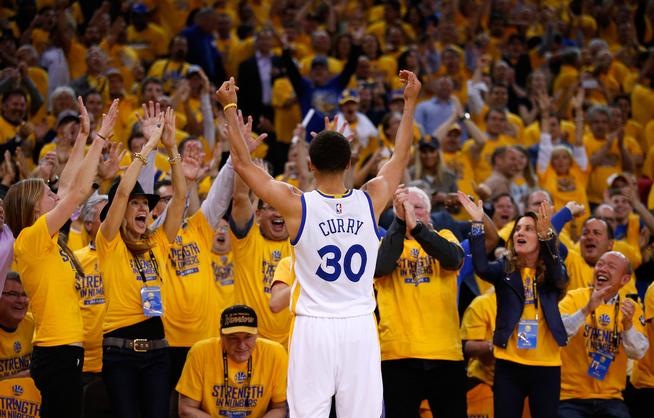