This story is directly ripped from Yahoo! Sports’ Ball Don’t Lie blog :
Tyrus Thomas celebrated his 24th birthday at The Big Chill with a performance by “celebrity” singer Fantasia Barrino.

Tyrus Thomas put on his best candy-striped polo shirt to sign his 5 year/$40 million dollar contract and answer a few questions from the media today.  Despite the fact that the affair was decidedly more understated than Lebron’s “Decision”, there was still no shortage of third-person references, as Thomas declared that “Tyrus is a unique character, and [Larry Brown] has no problem with it.”

And just as Lebron and company were given to incomplete, borderline disingenuous responses to questions regarding the machinations behind their free agency decision-making process, Tyrus neglects to mention that he was probably promised the starting power forward job when explaining why he was quick to re-up with the Cats.  He instead cites “the progress [the team] made” and “the guys on the team, the organization and playing for Coach Brown.”

All snarkiness aside, this is undoubtedly a solid signing for the Cats.  Even ESPN’s harbinger of sabermetric doom John Hollinger agrees (ESPN Insider only):

This isn’t exactly a steal, but the more I walk through it the more I get comfortable with the idea. Thomas is only 23 and he did play pretty well in Charlotte last season after a midseason trade from Chicago…

…Locking down a starting frontcourt spot at an average of $8 million a year, even for a non-star, isn’t bad business for a small-market club.

Like Tyrus, I’m glad this is settled and ready to “you know, get to going.”

The Bobcats have announced their full list of Summer League Campers, and whoo-boy are there some fun names.

While most of the NBA will focused for the next couple of weeks on the machinations of a once-in-a-generation free-agency class (Lebron, D. Wade, Bosh, Joe Johnson, Amare, Carlos Boozer, Paul Pierce, Dirk Nowitzki), or the summer league debuts of their full-of-promise lottery picks (John Wall, Evan Turner, Derrick Favors, Wesley Johnson, DeMarcus Cousins), the Bobcats are going to be taking a hard look at Darius Miles.

After the Memphis Grizzlies played “the island” to Miles’ John Locke in the 2008-09 season (“Don’t tell me what I can’t do!”), Miles added some more paperwork to his knucklehead file with a marijana arrest.  That, and the fact that Miles apparently managed to corrupt OJ Mayo in the few months they shared a locker room led to Miles being out of basketball for the 2009-10 season.

But Miles resurfaced in May at a Bobcats Free Agent Mini-Camp, where Larry Brown gushed that he’d been angling to get Miles on his team since he came into the league.  Miles stated that the reason he wanted to try to come back was so his 2 year old son could see him play.  That’s nice, but I’ve seen enough Outside The Lines segments to know that it’s code for “I’m broke.”

Challenging Miles for the title of “Shadiest Character Wearing a Bobcats Practice Jersey in Orlando” will be Shawne Williams.  Williams was the 17th pick in the 2007 NBA Draft, but has bounced around the league his whole career, last playing 15 games with the Mavericks in the 2008-09 season.  Why, you might ask?  (Fast-forward to 5:00)

Larry Brown brushed off concerns about Williams’ shady past (present?) by focusing on his need to get in shape if he wants a chance at an NBA career.  Not selling drugs will help, too.

In addition to Miles and Williams, actual Bobcats Gerald Henderson, Derrick Brown and Alexis Ajinca will be in Orlando making their cases for expanded roles in the upcoming season.

Rounding out the list are Alade “Yes, I’m Al-Farooq’s older, less talented brother” Aminu, Antonio “So Close, Yet So Far Away” Anderson (who nearly made the Bobcats roster last year and had two 10-days with OKC this past season), Brandon Bowman, Marcus “Gotta Have a Tarheel, Right?” Ginyard (who’s already bitching about the accommodations in Orlando), Brandon Hazzard, Nathan Jawai, Jerel McNeal, Jeremy Pargo, Pape Sow and PJ Tucker.

Those 19 guys will begin practicing in Orlando today through Sunday, July 4.  Several will likely be sent home before the Bobcats begin actual summer league games on Tuesday, July 5.

From our friends at ESPN:

ESPN’s award-winning primetime newsmagazine E:60 will examine former NBA star Michael Jordan’s passion for motorcycle racing in the episode airing Tuesday, May 4, at 7 p.m. ET. In an E:60 exclusive, Jordan talks with ESPN’s Hannah Storm and grants unprecedented access to a side of him few have ever seen.

Two weeks before the deal was completed that made Jordan the majority owner of the NBA’s Charlotte Bobcats, another ownership dream for the 47-year-old was realized; one unrelated to basketball. At Daytona International Speedway, Jordan earned his first win as a team owner on the American Motorcycle Association’s premier Superbike circuit.

In 2004, less than a year after playing his final NBA game, Jordan formed Michael Jordan Motorsports. Now in his sixth season of Superbike competition, the top motorcycle road-racing class in the US, Jordan’s persistence, commitment, and competitive drive has led the team to the top spot on the podium.

Jordan’s obsession with motorcycles extends beyond the owner’s box. He’s also a passionate rider. After retiring from the NBA in 2003, free from NBA contract restrictions that prohibited him from riding, Jordan had an encounter a gas station in a local Chicago neighborhood that changed everything. Shortly thereafter, he was riding fearlessly through the streets of Chicago, at death-defying speeds. Some excerpt quotes:

Hannah Storm – How long did you think it would take to get your first win?
Michael Jordan – Knowing me, I wanted to win the first year. But I knew, mechanically I didn’t have the right equipment to win, but that doesn’t mean I don’t hope for some type of win. I want to say that I committed my time and my energy into this sport and I want to be able to win a championship at the highest level. You know, where I’m competing against the Suzukis, the Yamahas, all the other different manufacturers.

Storm – When you were riding through the streets of Chicago at night …what was that like?

Jordan – Well at first it was scary because I probably was doing some things that I probably shouldn’t have been doing in terms of speed. It was fun. It was exhilarating obviously. At certain times, some of the speeds that I was going on the streets that I was going, they were not quite safe. I think on one straightaway we got up to like 157, which, now thinking about it, I must have been nuts.

ESPN’s E:60, which launched in October 2007, combines investigative reporting, in-depth profiles of intriguing sports personalities and features on emerging star athletes. These stories are presented in a fresh and innovative format that incorporates producer/correspondent meetings.

1. Balancing on top of a ladder that tall is very hard.

2. Doing a backflip off a ladder and landing on your back is painful.

3. Getting up and doing a handspring is insane.

This next video features Bango, Super Hugo and Rufus during the 2009 All-Star game. Apparently, Bango had to have surgery as a result of this stunt…leading us to believe that the “Ultimate Stunt” was an attempt to get back at Rufus for contributing to his injury.

If a second-rate mascot banked a shot off my crotch in front of a huge crowd I would be pretty motivated to reclaim my image. 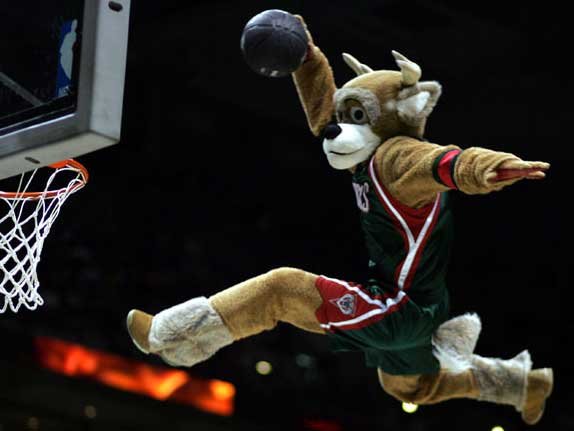