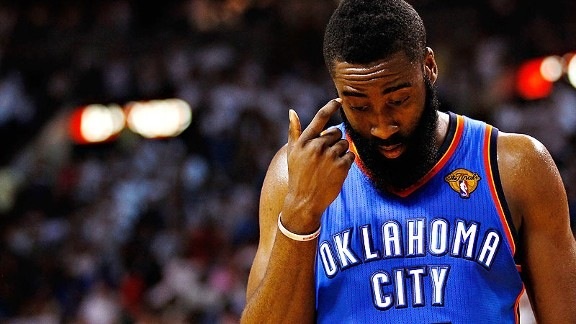 Where Have All the Superstars Gone?

James Harden, a 23 year old wing player with zero All-Star appearances, who was the third best player on his team last season, fought for and will receive the NBA’s maximum salary. And he deserves it. Here’s why:
The league’s current CBA contains a structural curiousity at the top; one that brings to mind European-style social policy more so than “Gots ta get mine” good-ol’-American capitalism: The five to ten best basketball players on planet earth are capped at how much they can earn.

Cut to Fox News: “That’s why they call it a ‘collective’ bargaining agreement! I wanna see Hasheem Thabeet’s birth certificate!”

In a world without maximum contracts, Lebron James would earn more than half his team’s payroll. Same goes for CP3, D12, D-Rose, Durant or any other transcendental, once in a generation talent. Not so under the current CBA, where a max player like Rose commands an average of $18 million a season, around one quarter of his team’s pre-tax payroll.
This is why “true max” superstars are the absolute best value in the NBA. They’re playing far below what they’re worth. Second best market value? Rookie scale contracts. Which is why any GM worth their salt is actively trying to build the bulk of his roster around 1-3 true max/superstar players and a bunch of rookies (sound familiar? *cough* OKC *cough*)
The problem is that at any given time, the league only has eight to ten guys who are bonafide supes.

Let’s do some simple math:

This leaves a whopping $1.5 BILLION to pay out to Non-Superstars and that’s before we add any cap exceptions or tax penalties.
The money has to go somewhere, right?

This, ladies and gentlemen, is exactly why guys like James Harden, Eric Gordon and Brook Lopez get offered max deals. At least 20 of the league’s 30 franchises will not have access to a true max superstar but are still obligated to field a competitive team while hitting the league mandated salary floor. Under these circumstances, it is without doubt that Harden is a max guy. Whether or not he is a superstar is a mutually exclusive argument.
–ASChin