The Charlotte Bobcats get blown out on the second night of a back-to-back in Detroit on Wednesday night, 98-75.  AP recap here, box score here.  I wasn’t able to watch live; had to DVR and watch late, so was already planning on keeping my comments short.  That’s a good thing, because this was a joke of a performance.

Second night of a back-to-back notwithstanding, this kind of effort is unacceptable.  Facing a revamped Pistons roster that was without holdovers Rip Hamilton and Tayshaun Prince due to injury, the Bobcats hung in through the first 16 minutes, but fell apart soon after.  Then came an epically bad third quarter in which the Cats were beaten 29-12, 18-12 by Charlie Villanueva alone.

The Bobcats eventually trailed by as many as 33 in the fourth quarter as garbage time was in abundance.  Gerald Henderson, Derrick Brown and Alexis Ajinca played their most extended minutes of the year, though none were impressive.

As Bonnell has already noted, telecasts of Bobcats games generally end with Larry Brown taking questions from a few assembled media-folk.  However, by the time that the telecast was wrapping up, Brown had not yet emerged from the locker room.  Lord knows what was said in there.

Through the years, the undertalented Bobcats have almost always played hard; always looked like they enjoyed playing with each other.  I’m afraid that spirit seems to be eroding this season.  Chemistry is nonexistent, body language looks bad.  Everyone except Nazr Mohammed seems to have regressed from last year.

My biggest fear is that this season will go the way of Larry Brown’s last season in New York; you know, after he had inspired a bunch of short-sighted trades to assemble an underwhelming team that destroyed the Knicks’ salary cap.  Brown ended up publicly feuding with his own bosses as the team tuned him out.  Granted, Isaiah Thomas deserves some of the credit for how ugly that situation became, but the upshot is that the Knicks franchise is still digging out from the debacle several years later.

The Cats next chance to assuage my fears comes Saturday night at the Cable Box as the Trailblazers come for their only visit of the year. 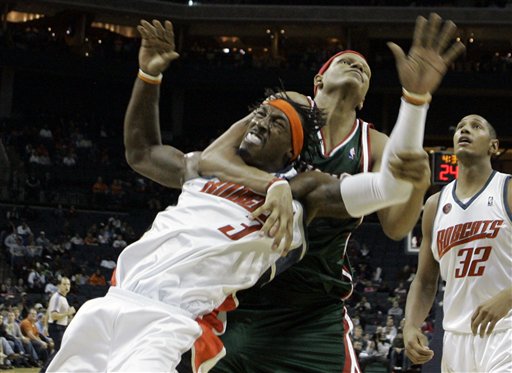