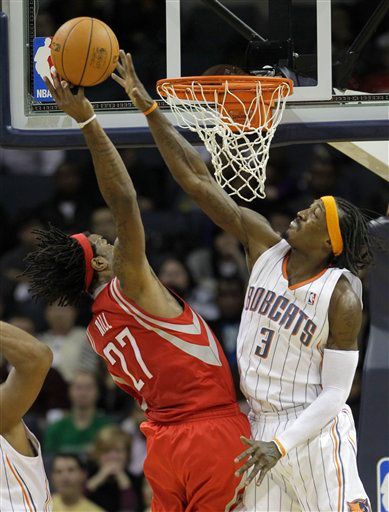 Stephen Jackson led the Charlotte Bobcats to a 102-94 victory over the Houston Rockets at the Cable Box on Tuesday night.  AP recap here, box score here.  The Cats improve to 17-19 overall, and a stunning 14-4 at home.

The Cats gave up 60 points to the Rockets in a miserable defensive first half.  Luis Scola’s crafty and scrappy offensive game was working, and Trevor Ariza, Aaron Brooks, Shane Battier and Chase Budinger took turns draining threes on the Cats’ lackadaisical perimeter defense.  However, when the second half rolled around, the defensive intensity was ratcheted up.  The Rockets would only get 17 points in each of the third and fourth quarters.

The Bobcats, who had been down by as much as 13 in the second quarter, chipped away in the third quarter and eventually overtook the Rockets in the fourth behind a Steven Jackson onslaught.

Jackson set a new career high and an all-time Bobcats single-game high in going for 43 points on 15-22 FG/3-5 3PT/10-11 FT  He also added 8 rebounds, 3 steals, and 3 assists/2 turnovers.  Jack got off to a quick start, scoring 10 of the Bobcats first 14 points, and then finished huge.  With the game on the line in the fourth quarter, Jackson was unstoppable with 16 points.  He did a lot of his damage on the defensively hapless Chase Budinger, but also hurt Trevor Ariza a bunch.

Rockets defensive ace Shane Battier held Gerald Wallace to an off night, and occasionally guarded Jackson, but clearly not enough.  Boris Diaw had a nice night with 19 points on 8-13 FG, 7 rebounds and 6 assists — and a 3-point play with 50 seconds that really sealed the deal.