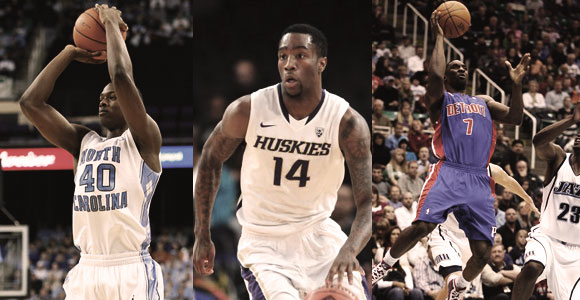 Previously in our 2012 Draft Preview, we’ve examined The Sure Thing, The Potential Sensation and The Next Bynum. Let’s wrap this baby up with everyone’s favorite Brand Manager.

Believe it or not, “Harrison Bryce-Jordan Barnes” is not the name of an English poet, actor or lord but of a 6’8″, 250lb 228lb small forward prospect from North Carolina nee Indiana Iowa (thanks to @gregdinkin, I had Sean May on the brain) whose hyphenated middle name suggests he’s either the second coming of a basketball god or a dandy fop who may or may not delight in the sport’s more physical side whilst driving to the hole. What is certain about Barnes is that he is in possession of an extremely rare talent in today’s NBA: mid-range shooting par excellence.

Imagine a young Richard Hamilton were he 2-3 inches taller with nearly 40lbs more muscle. Now make him shoot the ball at an insanely high release point, rebound more aggressively and defend three different positions. Yes, gentlemen, this is precisely the sort of player the Bobcats so desperately need in order to spread the offense for drivers like Gerald Henderson or Kemba Walker to finish skrong or dish out a dime. Good day to you sir!

Since I can’t fathom a scenario in which the team drafts Barnes at two overall, I’ll assume that the Bobcats trade back with Cleveland and acquire another pick for their troubles. With the 24th overall selection the Bobcats select combo guard Tony Wroten. At 6’6″, Wroten can eventually form with Walker and Henderson a very solid three guard rotation that can match up defensively with nearly every backcourt in the league. With the 31st overall selection, the Bobcats go big with four year senior Henry Sims – a tough, huge center to develop alongside Byron Mullens and Bismack Biyombo.

As solid a trade as it was, Tuesday evening’s exchange of Corey Maggette for Ben Gordon left the Bobcats very guard heavy. Walker, Henderson, Gordon and (in the above scenario) Wroton aren’t going anywhere so the team will either let D.J. Augustin walk or sign & trade him later in the summer. Matt Carroll and Reggie Williams are playing on expiring low-money deals and one will likely be moved or bought out. I’d bet on Williams.

Back in ’09 the team found their Shooting Guard, last year they drafted a potential Floor Leader and Defensive Maestro. This year they find their Sharpshooter and Third Guard.

Not bad at all. Do they win 30 games? If everything goes right…doubt it, but if you combine the young talent with two more draft choices the following year and a whopping $15 million in cap space – this squad will no doubt move ever further up the Eastern Conference Playoff ladder: A place of grand exposure in which young Harrison Bryce-Jordan Barnes may pitch anything and everything he well chooses. Cheerio to you all and God bless us everyone! 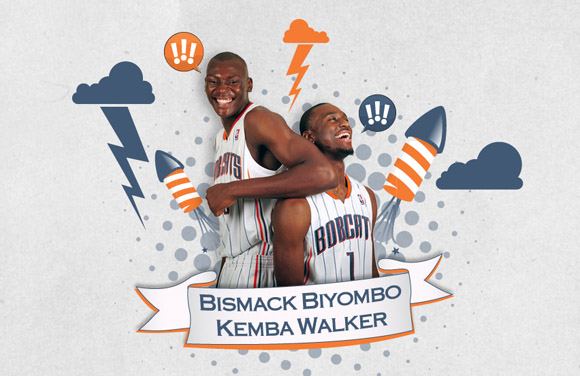 Two things you need to know about the ’11-’12 Charlotte Bobcats season:

Sound strange? It is. But that’s just part of the fun of being a Bobcats fan. You see, the organization has spent its entire eight year run in Charlotte “winging it” from one blunder to the next — hoping that the ship will right itself magically both on the court and off. No more hoping. This team has a plan. And a good one at that.

WHAT TO EXPECT IN THE COMING MONTHS

Cho has seen this movie before and he didn’t like the ending. REPEAT: You’ve got to be bad before being good. Being bad means a high lottery pick in a LOADED 2012 Draft. Charlotte has little chance of landing a superstar via free agency so the ONLY WAY that they’ll get one is in the draft. With Anthony Davis, Harrison Barnes, Andre Drummond, Perry Jones and Jared Sullinger just seven months away from shaking the Commissioner’s hand, the Bobcats MUST bottom out this season in order to have a shot at Lottery love. To make matters worse, if the ‘Cats somehow finish outside the top fourteen, their pick goes to Chicago as late payback for Tyrus Thomas.

BOTTOM LINE: Be Entertaining But Do Not Win Games; expect a losing record.

At $49.7 million in guaranteed contracts, the Bobcats are already at the mandated 85% salary cap floor level. There is NO REASON to spend money on name-brand Free Agents this December. Here’s an exercise: Every time you see a commenter whining about how the Bobcats should sign Jamal Crawford, your immediate response should be laughter, followed by an immediate heaving sob when you remember that the team owes a combined $54 million to Corey Maggette, Boris Diaw, Gana Diop, Matt Carroll and “Don Juan Draper” Najera over the next two seasons.

The goal here is to sign young, low-cost/high-potential players to short contracts (ideally two years) and see what they can do. I’ve already chronicled the prospects of Earl Clark, Brandon Wright, Nick Young and Josh McRoberts. I’ll add one more intriguing name a little bit later…

BOTTOM LINE: Expect the Bobcats to make a run at a young, cheap free agent over the next few weeks.

Let’s be honest: Cap space for the Knicks and cap space for the Bobcats are two entirely different beasts. You’re never going to read a HoopsHype headline screaming: “Derrick Rose demands Sign and Trade to Milwaukee”. It just doesn’t work that way. Disgruntled Superstars want brighter lights, bigger cities. The only chance small market teams have in a star driven league is to draft homegrown talent, build a championship caliber nucleus around him and pay him gloriously.

In the meantime, small market clubs like Charlotte can utilize their cap space by taking on bad contracts in exchange for draft choices or maintaining flexibility in the case a not quite-Superstar is available in a trade. Charlotte will be around $17 million under the cap next summer and nearly $40 million under the cap in the summer of 2013. By maintaining flexibility, the ‘Cats will in prime position should a team dangle picks or an All-Star over the next few seasons.

BOTTOM LINE: Expect the Bobcats to be in the market for a salary dump-for-draft picks deal by the trade deadline.

The amnesty “waiver” clause is a slap in the face to well-managed small market franchises. The “amnestied” contracts still have to be paid out, they just don’t count against a team’s cap — which means free spending teams like the Lakers, Wizards, Magic, Mavericks and Knicks essentially get a higher cap than the rest of the league.

Don’t get me wrong, Gana Diop and his albatross full-midlevel deal has been an unmitigated disaster, a final “F.U.” from Larry Brown, but if you have to pay the guy anyway why not try and get something out of him. Even if its only one point, one block and two and a half rebounds in eleven minutes. The Bobcats aren’t going to need the cap space for the next two years anyway and having Diop’s contract on the roster will help* them reach the 85% cap threshold in the meantime.
(*Note that this will be the first time Gana Diop has ever helped the Bobcats in any way)

5. Re-Sign Kwame Brown ONLY if the money is right.

Kwame was a great redemption story last season. He played hard and kept the team in games with his rugged low post defense and surprising collection of double-doubles. The issue is that at 29, Brown is just a little too long in the tooth for the Bobcats plans. If he’s looking for more than $4 million per, then the team should let him walk.

There is one other option: If the team is in love with him and wants to secure his services for another three or four seasons, they could throw him a “Nick Collison” deal by handing him $8 million this season and $3.5 over the next three. This would give Kwame a 4 year $20 million deal without jeopardizing future cap flexibility in the summers ahead.

BOTTOM LINE: Expect the Bobcats to re-sign Kwame ONLY if they can fit him into their long-term salary cap plans.

6. What to do with Boris Diaw?

It’s the final year of his contract and you would hope that he’ll be motivated to earn one last big payday. If so, then great. The Bobcats would like nothing more than for Diaw to come in, play hard and catch the eye of a contender in need of frontcourt help. A badass Boris could mean another draft pick or prospect via trade while an average one will at least mean cap relief come July.

BOTTOM LINE: With Bismack, Tyrus and D.J. White already at the PF spot, Diaw could be the first Bobcat traded this season.

Sold I to Los Angeles,

Minutes after they took I

Adam Morrison is making a comeback. Sure, we’ve all seen that ridiculous scrap AMMO picked with an 18 year old kid in Serbia but did you see the sick highlight reel where he dropped 30 in old-school Gonzaga-mode just a few games later? Morrison is angling for a return to the league and I can’t think of any better team to do it with than the one that drafted him five years ago. The ‘Cats needs another scorer off the bench, needs depth at the SF position and Morrison will no doubt come cheap. It worked with Kwame, why not try it with the ‘Stache?

BOTTOM LINE: I can’t think of a better storyline for the Bobcats this year than to have Adam Morrison come back and average double figures off the bench. It’s worth a shot.

In summary, expect the Bobcats to be bad but entertaining this season and next. Expect them to add draft picks and young FAs. Expect them to let veteran contracts expire while young guns learn on the job. And finally, expect them to be very, VERY GOOD starting November, 2013 when Rich Cho and MJ will be hanging in the owner’s suite, smoking Cubans and saying, “I love it when a plan comes together.”