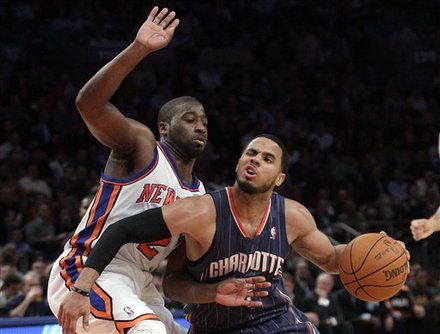 The Charlotte Bobcats’ 3-game winning streak came to a halt on Thursday night at Madison Square Garden, as they fell to the Knicks 97-93.  AP recap here, box score here.  The Bobcats fall to 15-19 on the year.

The fourth quarter was essentially a barrage of three-pointers (4 for the Cats, 6 for the Knicks) with a big ugly dry spell for both teams (no points for either team for a 4 minute stretch) in the middle.  The Bobcats tied it at 84 after consecutive Stephen Jackson-Raymond Felton threes with just over 2 minutes left, but then gave up a three to Chris Duhon on the other end.  Stephen Jackson appeared to answer with yet another three on the ensuing Bobcats possession, but after a lengthy review, it was ruled a two-pointer — 87-86 Bobcats.

Then the Danilo Gallinari Three-Point Show started.  Gallinari hit a three to put the Knicks up 90-86.  After the Bobcats came up empty on the other end (2 missed threes), the ball found it’s way back into Gallinari’s hands, about 29-30 feet from the basket.  Appropriately expecting a drive, Gerald Wallace gave a bit of cushion.  Instead, Gallinari used the space to rise up and drain the long three — 93-86 with 44 seconds left — huge nail in the coffin.

Remember, in the Bobcats’ loss to the Knicks back on December 20th, Gallinari had a big late three and the game-clinching block of Acie Law’s layup, so this guy is beginning to make a habit of beating the Cats.

Besides Gallinari, there were several other problems for the Cats in this one: 1) Gerald Wallace never quite got it going (13 points/9 rebounds) as we’ve become accustomed to, 2) we couldn’t stop Wilson Chandler (27 points on 11-21 FG, 7 rebounds, 6 assists, and 3) we succumbed to a 3-point shooting contest with the Knicks.

The Charlotte Bobcats dropped another road game Sunday evening, this time 98-94 to the New York Knicks.  AP recap here, box score here.  Since defeating these same Knicks in Charlotte last Tuesday, the Bobcats have lost three in a row and now stand at 10-16 overall (1-12 road) and have fallen to 9th place in the Eastern Conference.  The Knicks, on the other hand, have won 6 of 8.

The big story for the Bobcats here is the Gerald Wallace was held out of the game after experiencing a severe headache.  Details are frankly sketchy, but it seems that Gerald must have complained of a headache sometime Sunday.  The training/coaching staff made the decision to hold him out, no doubt recognizing Gerald’s personal concussion history (along with the recent increased sensitivity to head injuries in the sports world in general).  Per Larry Brown’s postgame comments, Wallace (true to form) tried to convince the staff that he could play, but they stuck with their original decision.

Wallace looked OK on the bench, and at no time was it ever suggested that the headache was related to any recent blow to the head, so hopefully he’s back next game.  But it was certainly awkward for him to have to sit for a headache just a night after he questioned teammates’ effort.

With Wallace out, the Bobcats could have used big games from Stephen Jackson and Boris Diaw.  But Boris was limited due to foul trouble, and Jackson went out with back spasms in the third quarter.

Despite this, the Bobcats were able to hang around and make a run at it late in the fourth quarter.  The Knicks didn’t play particularly well, but they did take and make a lot of threes — 11-25 — which kept the Cats at bay.

Hot Mess Of A Finish

As noted, the Bobcats stayed within striking distance; and not surprisingly, the Knicks nudged the door open a little wider with several mistakes down the stretch.  Wilson Chandler threw the ball away with 30 seconds left and the Knicks only made 3-6 FTs after that.  But the Bobcats weren’t sharp enough to take advantage.  They didn’t close out on the Knicks’ 3-point shooters well, and Boris Diaw missed two threes with under a minute left, either of which would have been huge.

But the biggest boner was on the last play.  With no timeouts left and nine seconds on the clock, Danilo Gallinari made only one of two free throws to give the Knicks a two point lead.  Diaw had fouled out putting Gallinari on the line, so he’s done.  You want all your available penetrators and 3-point shooters on the floor in such a situation, right?  So maybe Felton, DJ, Flip and Gerald Henderson.  Probably one guy who could crash the boards, too, right?  Derrick Brown?

Instead, Larry Brown chose to take Acie freakin’ Law out of mothballs.  Not only that, but on the inbounds after Gallinari’s made free throw the Bobcats looked completely flummoxed and Acie Law ended up getting the ball.  Instead of getting it to Raymond, who had been very effective penetrating against the Knicks (lack of) interior D, Law took off.  Yes, the guy who has played 71 minutes all year and only 5 since being traded to the Bobcats a month ago is your go-to man with the game on the line.

Law weaved through traffic and made his way towards the rim, but never really got a great angle or enough separation from the Knicks’ defenders.  He also didn’t see Raymond Felton, who looked to be available for the kickout.  Law’s layup attempt was swatted away by Danilo Gallinari, who gladly atoned for his missed free throw.

In the postgame comments, Brown implied that Law was indeed supposed to get the ball, but that the hope was to penetrate and kickout for a game-winning three.  Really?  Acie Law?

Could there be a more perfect cure for an offensively offensive team than to play against Mike D’Antoni?

Bobcats ache out a win against the Knicks tonight in double overtime 102-100.

1. Ugly, ugly, ugly win for the Bobcats and the problems that we witnessed in Boston didn’t get any better, the competition just a lot weaker.

Not much more to say when both teams shoot 38% from the floor: Cellar Dweller MANIA!
Knicks are supposed to be an offensive team but looked completely lost until the 4th quarter when Nate Robinson, Chris Duhon and David Lee Jared Jeffries got it going to bring the Knicks back from 20+ down to tie the game with around 2 minutes to go.  Danilo “Big Bright Shooting Star” Gallinari looked good in limited minutes scoring 16 on 6-11 shooting before sitting down with foul trouble and a bad back.

As for the Bobcats…where does one start?  The team played a great first half, scoring 51 points (just 8 shy of Wednesday’s total in Beantown), spreading the ball around and looking confident on offense.  The D was spectacular, limiting the Knicks to just 37 first half points.  Then came the second half…

2. The Bobcats Have Two Options: Find a Reliable Scorer OR Play the Knicks 80 More Times This Season.

The ‘Cats only managed 31 points in the 2nd half – which is basically what they averaged in the Opener debacle against the Celts – and amazingly were outscored 27-13 in the decisive 4th quarter.  The game should have been over in the third quarter but Charlotte reverted to its “Hot Potato” ways of old with no one stepping up to take and make shots.

In an embarrassingly desperate strategy, the Bobcats repeatedly went to tertiary star Gerald Wallace in the post or on the wings to “will them a basket” with no one in the organization realizing that Crash is not in the least bit equipped to play that role.  Not since Scott Baio left Happy Days has a supporting cast member struggled so mightily to carry his own show.  Maybe Gerald has a Charles in Charge 2nd Act resurgence in him later this season.  Let’s hope so.

We’ve been blogging about it all season and I’ll mention it here briefly again: The Bobcats need a go-to scorer.  Period.  It will take them from 11th in the East to 7th or 8th.  Worth the gamble.

By the end of the first overtime, Raymond Felton was seriously flirting with the first Triple Double in team history.  A minor ankle injury may have sabotaged the effort by keeping him out for a few possessions but Felton still finished with a very solid 22pts, 9asts, 8rbs on 8-18 shooting.  Those shooting numbers would’ve been higher had the team not insisted on running the famously hit-or-miss-but-mostly-miss “Raymond Does Dallas” iso drive nine or ten too many times throughout the game.  Ray nailed his last three driving layups though to lead the team to victory so expect to see a whole lot more of those errant layup attempts until the team gets some more offensive help.

Stephen Graham played out of his mind (in terms of Stephen Graham) scoring 14pts on 6-9 shooting, including a CLUTCH drive late in the second overtime to put the ‘Cats up.  His defense was superb and I was impressed that he hit that clutch drive late after sitting on the bench for most of the second half.

D.J. finally started spinning in the 2nd half scoring all 15 of his points after the break.  Augustin had a few very smooth, feline drives and scoops to the hoop.  He also hit a clutch three in overtime.  Good to see him back to form.

5. Not Ready For Prime-Time Players.

Diaw and Chandler are still not in game shape.  Chandler worse so than Boris.  Tyson looked like “Emeka Okafor Gone Horribly Wrong” fumbling a couple of easy layup/dunk attempts in the first half.  In the second he got it going a little bit and threw a couple down.  He still looks slow and he has no hops so until he gets in game shape, he’s basically a Jahidi White type foul magnet.

Diaw’s rust shows in his shooting.  While 17pts/6asts/11rbs isn’t a terrible line, 5-15 shooting is.  He also looks slow on defense.  Can’t wait to see both of these guys back to their old ways.

At the end of the day, a win is a win.  Unfortunately the competition isn’t going to get much worse than the Knicks so if your team requires 2-count ’em-2 Overtimes to beat what might be the worst team in the conference AT HOME, well, then you might want to figure out how to improve the roster just a bit.  Cavs up next.  See ya there.