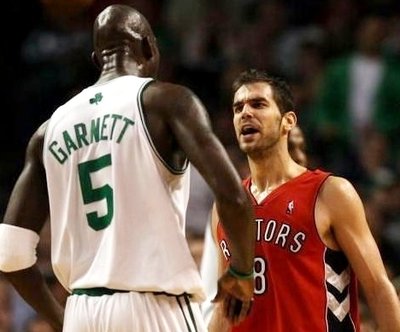 We can finally put all that talk of Boris Diaw playing the point behind us.  The versatile forward will be shipped to Toronto to play for his former Suns boss Bryan Colangelo.

The Arizona Republic reports that Diaw will be heading to the Raptors in exchange for part of the Chris Bosh trade exception and journeyman (as well as former Bobcat) Dwayne Jones.  Jones would be first acquired by Toronto from Phoenix in a prior trade that would send Hedo Turkoglu to the Suns in exchange for Leandrinho Barbosa.

The trade as reported would save the Bobcats $9 million dollars in cap space this season and next while putting the team in prime position to trade for a starting point guard and fill out their roster without venturing into the luxury tax this summer.

ANALYSIS: After re-signing PF Tyrus Thomas to a 5 year $40 million contract last week, the Diaw move comes as no surprise.  Only a team with cash reserves like the Lakers spends $8 million a year on their backup power forward.  Expect Tyrus to start immediately.  Depending on how Tyrus’s contract is structured, the Bobcats are between $8 and $10 million below the League’s luxury tax threshold for next season of $70 million.  Trading Diaw will not only give the team the ability to find a quality starting point guard via trade this season but also allows the team to potentially pursue a max-type free agent next summer as they currently sit about $20 million under next year’s cap.

1. Bobcats lose to the visiting Celtics on Saturday night, 89-84.  AP story here, box score here, PopcornMachine.net game flow here.  This was the eighth straight win for the Celtics, who move to 16-2 overall, while the Bobcats fall to 5-11.

2. Big crowd tonight on a holiday weekend to see the Cats host the World Champion Celtics.  The crowd was announced as a sellout (19,177) but I would estimate the place was about 85% full.  Michael Jordan was back in the house in his customary seat at the end of the bench; Bob Johnson was at midcourt; and NASCAR dude Jimmie Johnson was a few seats down from him.  I would estimate that between a quarter and a third of the crowd were green-clad Celtics fans.  We were treated to a close, defensively-minded and well-played game in which the Bobcats ultimately succumbed to the champs.

3. The Bobcats again started Felton, Richardson, Wallace, May and Okafor and let that group play together for 8 or 9 minutes.  That lineup played very well and grabbed a 12-4 lead after a few minutes; the first quarter ended with the Cats up 22-17.  Sean May continues to take baby steps back towards being a functional NBA player, grabbing 4 rebounds and hitting 3-5 FGs in 18 minutes.  The 15-20 foot jumper and the rebounding instincts are still there, but right now the game is moving a bit fast for him.

4. Ditto “the game moving too fast right now” for Alexis Ajinca.  Lex logged a few minutes in the second quarter, but looked pretty out of place against the Celtics mix of experienced veterans and veteran-like young guys (granted, there’s no one on the Celtics that’s a good matchup for him, and he got stuck on Big Baby Davis for those few minutes).  I’ll continue to beat the drum that Freedom Fries needs regular minutes – in the D-League – to acclimate himself to American basketball.

Hopefully, we now have another functional big in Dwayne Jones such that the team can spare Lex and let him get those D-League minutes.  Jones played 13 minutes, and didn’t log any meaningful statistics, but looked mostly competent.  He definitely led the team in “mini-conferences with teammates during breaks in the action so that he understood his responsibilities” in the upcoming possesions.

5. Jason Richardson and Gerald Wallace led the team with 22 and 23 points, respectively.  Both were able to get their points within the offense, and within their comfort zones.  Richardson again showed no ill effects from his recent knee troubles.

6. However, the discipled Celtics defense was able to prevent both Richardson and Wallace from getting much going in the crucial last three minutes.  Take a look at the 4th quarter play-by-play and you’ll note that both guys contributed in the beginning and middle of the final period; but with most of the crowd standing (seriously!) and hanging on every play in the last few minutes, the Cs stayed at home on D, prevented Richardson and Wallace from touching the ball, and dared Raymond Felton to beat them.

7. And after a fantastic game on Friday night against the Pacers in which he hit from everywhere (including a tough, driving layup to send the game into OT) Raymond had a dismal follow-up game.  He was 2-15 from the floor with 6 turnovers.  He continues to find other ways to contribute, with 7 rebounds and 6 assists, but it was the four (yes, four) missed layups down the stretch (two were blocked) that killed the Bobcats chances of pulling this one out.  Clearly, the Celtics had committed to staying at home on defense and taking their chances with Felton, and it was the right decision.  Raymond has a knack for overpenetrating, giving himself an exceedingly difficult shot, and rarely drawing a foul in the process.  Perhaps it should be DJ doing the majority of the ballhandling in crunch time?  (It was again a lineup of Augustin, Felton, Richardson, Wallace and Okafor in the fourth quarter.)

8. To contrast, when the game was on the line, the Celtics were able to go to Paul Pierce.  The Truth got them eight points (on two short jumpers and four free throws) in the last four minutes to put the Bobcats away.  It’s worth noting exactly how Paul Pierce was able to do this: the Celtics exploited the Bobcats small lineup by getting Pierce isolated on the much smaller Augustin through screens and switches several times.  Hopefully this doesn’t become a recurring theme for the Bobcats’ fourth quarters.

9. The Bobcats did a nice job on Kevin Garnett, who went for a pretty quiet 10 points (4-12 FG) and 7 rebounds.  Everyone took a turn on Garnett, including May, Okafor, Mohammed, and Wallace, and he never got going.  But Kendrick Perkins was able to pick up the slack, with 15 points (7-14 FG) and 12 rebounds to effectively negate Garnett’s quiet game.

10. Next game: Monday night, hosting the T-Wolves at the Cable Box, 7:00 PM ET.  With the starting five intact, and the team showing signs of rounding into shape, we should be expecting wins in these next two home games (T-Wolves and Thunder).