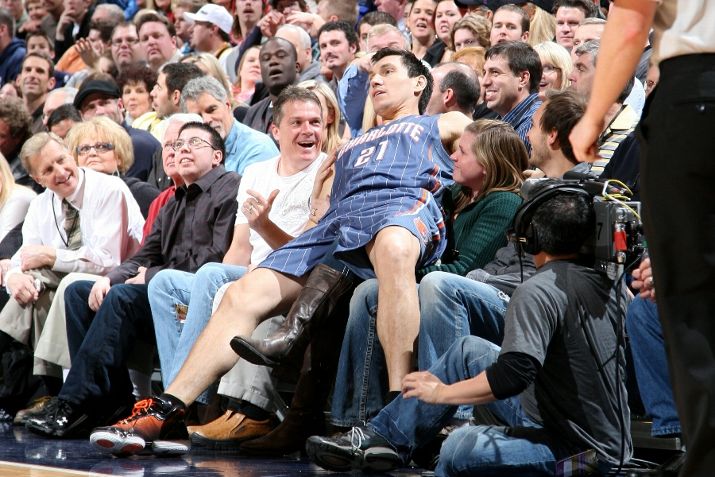 Another month, another weird trade rumor.  This one has some serious legs apparantly as the ‘Cats were all but ready to send Raymond Felton, Sean May and Nazr Mohammed to Dallas in a three team deal that would return Thunder backup PG Earl Watson and Mavs backup C Desagna Diop to Charlotte.  ESPN.com’s Mark Stein reports that the deal is currently “dormant” and that once DJ Augustin returns from his “abdominal strain/sports hernia” the deal may go down.

Some quick thoughts on the potential trade:

1. I really hate to keep bringing this up but if Felton/May get dealt together in this trade, we’re basically saying that instead of trading the two (as the 5th and 13th pick in the 2005 draft) for Portland’s #3 pick that year (your choice of Chris Paul or Deron Williams), we’ll instead hold on to them for four modestly-to-completely unproductive seasons and then unload them to Dallas for DeSagna-freakin’-Diop.  You gotta love being a Bobcats fan.

2. That said…this deal could turn out to be somewhat positive for the Bobcats.  If DJ is your man at the point for the future, then you could do a lot worse than Earl Watson.  The 29 year old has pretty much equaled Raymond’s PER over 7 years in the League and is more accustomed to playing in a backup capacity.  At $6.2mil and $6.4mil over this season and next, he’s paid about $2mil more this year than Raymond but he’ll come off of the books completely before the summer of 2010.  Yeah, Earl won’t provide the “heart” that Ray Felton has brought over the last four seasons in Charlotte but he won’t provide any of the “I’m going to drive to the hole at the end of the game indescriminately and throw up a shot and see what happens” as well.  We all like Raymond but his leaving the team won’t be as big of a hole as some might think.

3. DeSagana Diop coming to the ‘Cats is both a plus and a minus.  On the plus side, he provides a very good defensive presence in the lane as a backup C or together with Emeka when the team plays against the likes of the Cavs, etc.  Yeah, his offense sucks, but I’ll take 82 games of Diop playing defense and altering shots over Nazr laboring and incessantly fouling any day.  On the minus side, Diop’s contract is for roughly the same amount per year as Nazr’s but with 2 MORE additional seasons.  Not sure if I want to be paying my one-dimensional backup Center $7mil per in 2012 but hell, the world’s going to end in 2012 anyway so may as well go out in style.  Plus, Diop’s only 26 so we’ll only be paying him until he’s 30.

4. Sean May gets to eat all the Tex-Mex his heart desires.  And he can try out East Texas Burger.  As J.T. from “Planet Terror” would say, “Best in Texas, heh-heh.”

5. The minute that the JRICH/Diaw-Bell trade went down everybody from the local Charlotte online forums all the way up to the major sports networks trashed MJ and Coach Brown.  But guess what, since the trade the ‘Cats have played .500 ball, have looked more balanced, hungry and overall more like a pro-team.  So I’m giving LB the benefit of the doubt on this one.  He clearly sees that DJ is PG to run the show when the game is on the line and that getting another 7’ foot/280lb shot-blocker in the process is going to make the team that much more defensively capable.

6. DIRECTION:  With all of this, we’re still looking at the ‘Cats building around Okafor, Augustin, Diaw, and (if he doesn’t get traded) G-Force.  They’ll have a decent bench with pro-depth and around $20mil to spend come 2010 if they can recruit someone to come play in Charlotte.  Hardly “State of Suck” worthy in my estimation.