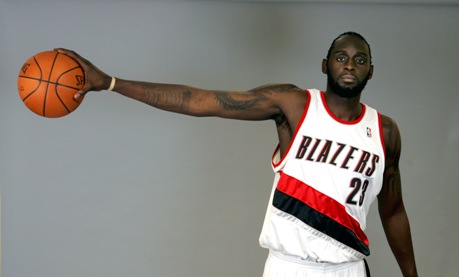 The Bobcats have announced their full list of Summer League Campers, and whoo-boy are there some fun names.

While most of the NBA will focused for the next couple of weeks on the machinations of a once-in-a-generation free-agency class (Lebron, D. Wade, Bosh, Joe Johnson, Amare, Carlos Boozer, Paul Pierce, Dirk Nowitzki), or the summer league debuts of their full-of-promise lottery picks (John Wall, Evan Turner, Derrick Favors, Wesley Johnson, DeMarcus Cousins), the Bobcats are going to be taking a hard look at Darius Miles.

After the Memphis Grizzlies played “the island” to Miles’ John Locke in the 2008-09 season (“Don’t tell me what I can’t do!”), Miles added some more paperwork to his knucklehead file with a marijana arrest.  That, and the fact that Miles apparently managed to corrupt OJ Mayo in the few months they shared a locker room led to Miles being out of basketball for the 2009-10 season.

But Miles resurfaced in May at a Bobcats Free Agent Mini-Camp, where Larry Brown gushed that he’d been angling to get Miles on his team since he came into the league.  Miles stated that the reason he wanted to try to come back was so his 2 year old son could see him play.  That’s nice, but I’ve seen enough Outside The Lines segments to know that it’s code for “I’m broke.”

Challenging Miles for the title of “Shadiest Character Wearing a Bobcats Practice Jersey in Orlando” will be Shawne Williams.  Williams was the 17th pick in the 2007 NBA Draft, but has bounced around the league his whole career, last playing 15 games with the Mavericks in the 2008-09 season.  Why, you might ask?  (Fast-forward to 5:00)

Larry Brown brushed off concerns about Williams’ shady past (present?) by focusing on his need to get in shape if he wants a chance at an NBA career.  Not selling drugs will help, too.

In addition to Miles and Williams, actual Bobcats Gerald Henderson, Derrick Brown and Alexis Ajinca will be in Orlando making their cases for expanded roles in the upcoming season.

Rounding out the list are Alade “Yes, I’m Al-Farooq’s older, less talented brother” Aminu, Antonio “So Close, Yet So Far Away” Anderson (who nearly made the Bobcats roster last year and had two 10-days with OKC this past season), Brandon Bowman, Marcus “Gotta Have a Tarheel, Right?” Ginyard (who’s already bitching about the accommodations in Orlando), Brandon Hazzard, Nathan Jawai, Jerel McNeal, Jeremy Pargo, Pape Sow and PJ Tucker.

Those 19 guys will begin practicing in Orlando today through Sunday, July 4.  Several will likely be sent home before the Bobcats begin actual summer league games on Tuesday, July 5.