Ah, the Eastern Conference. ‘Tis a place where a bad team can go 2-9 in a late season slump and still be only a game or two out of the Playoffs. The current Race for Eight bears more resemblance to peewee football hot potato than a professional sports exercise. Someone please just win some games and put us all out of our misery.

Which brings us to the titular “Nottery,” a place where franchises go to die: Not good enough to be good and not bad enough to get good. Bobcats owner Michael Jordan understood this more so than any other when he made the controversial Gerald Wallace trade last month. Good isn’t good enough and if you want to get better, sometimes you gotta get a little worse.

SECTION 1. WHAT WE GOT

Before we head out to the supermarket, we should take a look in the cupboard. As poor as the Bobcats have been playing recently, the team does have a few assets.

Has clearly shown that he can be a top 15-20 starting PG in the league. Can shoot and has figured out how to score from in close. Defense isn’t as big of an issue as current rules have made it nearly impossible to defend the position. Proved that he could shoot his way out of a slump. Still on his rookie deal.

Volatile and playing too many minutes for his age, Jackson is nonetheless the Bobcats’ best player. He’s the only guy who can consistently create his own shot and when he’s on, can single-handily carry the team to a victory. His contract is probably untradeable until at least the summer of 2012 so look for JAX to remain in his role with the team next season.

Needs to prove that he can stay healthy and stay focused but when he’s in physical and mental shape can really change the game from a defensive perspective. Solid rebounder and excellent shot blocker who has a nice mid-range jumper. Bobcats have invested a ton of cash hoping the Tyrus experiment works out. Best case scenario: Starting Power Forward for the next five seasons. Worst case scenario: Severely overpaid role player.

Very good defensive guard. Very athletic. Shown promise as a cutter but jump shot is still erratic. Henderson is another unknown. He’ll probably never be a great long ball threat but if he can develop a consistent mid-to-long range shot could become a very good player.

Three youngish rotation players who have shown flashes of potential. White seems to have the most upside and is still on his rookie deal. Livingston has managed to carve out a place in the league after destroying his knee a few years ago. Cunningham should keep improving now that he’s playing the three position full-time.

Total it up and you have seven players who’ll most likely be suiting up for the Bobcats next season. That’s half a roster. Combine them with two first round draft picks in June and the CAP CRUNCHERS (Gana Diop, Matt Carroll, Eddie Najera) and you’re down to just two roster spots available to improve the team.

SECTION 2. WHAT WE NEED

Augustin, Jackson, Thomas and Henderson will most likely return as four of the team’s starters. Livingston, White and Cunningham will be solid contributors from the bench. That still leaves some major needs:

a.) Men in the Middle

As pleasantly mediocre as Kwame Brown has been, he’s an unrestricted free agent come July and the team will need to make a major upgrade if it wants to compete. Gana Diop is currently the only center on the roster and he was bad before the season ending achilles injury.

Augustin, Jackson and (if he develops a jumper) Henderson can handle most of the scoring as starters but the team lacks any sort of big time scoring presence from the bench. The Bobcats will need to find someone capable of taking off some of the scoring load.

Either through the draft or through crafty trades, the Bobcats will need to find a way to bring in a guy who’ll move the turnstiles and put down game-winning buckets.

Charlotte will most likely pick around #10 and #18 in the draft barring a improbable Bobcat Playoff berth, lottery miracle or a late-season collapse by New Orleans.

It’s by all accounts a weak draft and the ‘Cats would be better off not drafting for need. The center crop is thin but fortunately there are enough solid SF candidates who could be brought in to eventually replace Stephen Jackson a year or two down the road.

No one knows what the new CBA will look like next season (if there is one) but I’d be willing to bet that the Bobcats’ situation won’t change much. Once all of the expirings come off, the team will sit at around $49 million in salaries, around $10 million south of this year’s cap. Add in the two first rounders along with re-upping Dante Cunningham and the team should be at around $54 million.

Obviously, the remaining $6 million wouldn’t be enough to bring in a big-name star (even if there was one in a weak FA class) but the extra wiggle room may help them pull off a deal or two IF the team is lucky enough to import a decent center from another team.

Made big strides this season but the high-flying athlete probably doesn’t make much sense to pair with a similar player in Tyrus Thomas. Clippers also seem intent on keeping him.

Will likely command around $10 million/per on the open market. Gasol is a lower rent version of his All-Star brother but is only 26 and could develop into top tier center himself given the right circumstances. He’s a restricted and the Griz have stated that they’ll re-sign him but given the historical ownership thriftiness and the fact that Z-Bo’s deal is also up makes me think that Gasol could be had with a big poison-pill offer sheet. To make a move for Gasol, the Bobcats would likely have to find a taker for Boris Diaw’s $9 million expiring contract first (see TRADE section).

Performed adequately for the team as a starter this season and could be brought back as a backup if the price is right.

Boris Diaw, Boris Diaw, Boris Diaw. Did I mention Boris Diaw? I just can’t see any way the Frenchman stays on the Bobcat roster come training camp. Only on the books for a final season, in a contract year (so will likely be motivated – see Chandler, Tyson) and has proven that when he gives a crap can be a game-changing presence in the lineup. All these factors combined with the Coach’s obvious dissatisfaction in Diaw’s inconsistent performances will likely land Boris in another uniform next season.

a.) Boris Diaw to Toronto for Leandro Barbosa.

Colangelo wanted him last summer and they need size. Both players on expirings, Bobcats trade big for small but also shave another $1.4 million off the books to go after a FA. ‘Cats get the bench scoring they’ve so desperately needed.

b.) Boris Diaw to LAClippers for Chris Kaman.

Again, both players on expirings. Clips get the third big to rotate with Griffin and Jordan. Bobcats take on an additional $3.2 million and risk Kaman’s recent injury history but if it works out, then they have a high-scoring starting center for the first time in franchise history.

In this deal, the ‘Cats could find a team with cap space in need of a versatile big and compensate them with either this year’s late first rounder or Portland’s pick in 2013. The ‘Cats would then have around $18 million to pursue a free agent target like Marc Gasol.

Whenever the ’11-’12 NBA season starts, the Bobcats (barring major injury) will look quite a lot better than currently configured.

If the team simply follows the recipe above, they could trot out:

The team would still be well under the $60 million cap and have enough flexibility the following summer to make a major splash in the vaunted Free Agent summer of 2012. No need to fret, Bobcats fans. I think MJ has a plan and if he follows it correctly, the team may well be in contention sooner rather than never.

POLL : This Season: Where Did It Go Wrong? 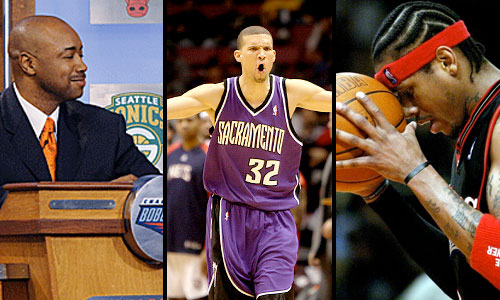