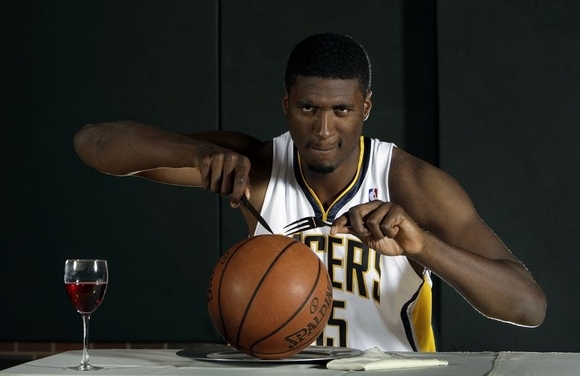 Charlotte can’t overcome Stephen Jackson’s worst game as a Bobcat as they lose 98-94 to the Clips on the road, falling a game below .500 (27-28) and deadlocked with Milwaukee for 8th place in the Conference.  The ‘Cats trail early, turn the ball over, play defense for around two thirds of the game and can’t withstand a late charge by the home team.  Any of this sound familiar?

He Was Due for One

The story of the game for the Bobcats has to be Stephen Jackson’s “Jamison“-like stinkbomb.  JAX went 1-16 from the field and ended up fouling out late in the fourth with 7pts, 5asts, 5TOs, and 6 boards.  He never got it going and the ‘Cats threw away a winnable road game thanks to the backcourt’s poor shooting.  JAX and backup point guard D.J. Augustin combined to go 2-24 from the field.  Ouch.
Jackson was lucky to not be T’d up several times as he repeatedly directed his frustration onto the officials.  Before tonight’s game, JAX had scored in double figure in ALL of his 45 games with the Bobcats.

The fact that Jackson’s stinker came a day after his “tired from fatigue” comments doesn’t bode well for a team that has no real backup at the shooting guard position.  Hopefully the coaches will stop rubber cementing Gerald Henderson to the bench from this point on.
One positive note from this development: It did seem as if Jackson’s frustration came from his inability to help his teammates when they needed him, rather than some ego-fueled scorer’s rage.  You like to see that in a player.

How ‘Bout Them Clippers!

For people still wondering why Mike Dunleavy is still employed in any capacity, just take a look at the talented roster he’s assembled in the past couple of years:

Add in a MAXplayer like Joe Johnson or Chris Bosh (they have the cap space to do it) and a real coach and this team could be VERY GOOD next year.

The Clips went nine deep tonight and (unlike the Bobcats, who essentially got production from five guys with Nazr out with a back and D.J./JAX ineffective), ALL NINE PLAYERS contributed.  It was death by a thousand cuts with Butler dropping corner threes at will, Eric Gordon scoring the ball from everywhere on the court and Baron balling in spurts like it was the year 2000.  Six players dropped double figures for LA while new backup PG Steve Blake notched 7 assists.  Good times to be a Clips fans.

The Bobcats rallied hard in the third quarter when they erased the Clips’ 13-point lead at the 6:36 mark and went up 64-62.  They couldn’t hold on as no one (aside from Boris Diaw) could step up their game in Jax’s absence.  Gerald Wallace had one of his super-stats games (32pts, 12rbs, 4steals, 5asts) but he’s not the team’s Go-To guy in the 4th.  That’s JAX’s job and tonight he just wasn’t delivering.  Raymond tried but couldn’t do it.  Boris was aggressive and could have nailed a three with 2:50 to go that would have put the Cats up by six but it rimmed out.
The Bobcats will need to find a strategy that will allow them to win games even if their clutch scorer is cold.  Hope they figure it out soon.

Until Next Time…Enjoy the Loss Bobcats Fans…