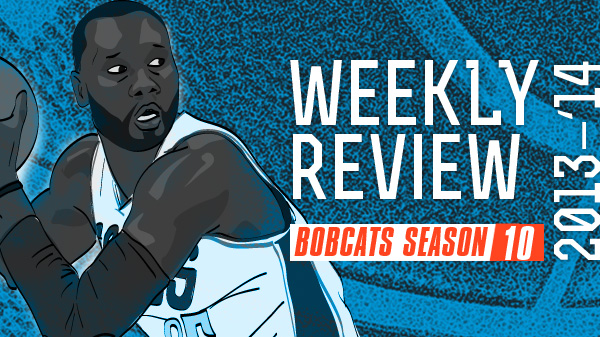 The Charlotte Bobcats finish a tremendously disappointing week 1-3, a span that saw the team:

Who Are These Guys?

The Bobcats’ last four games have been decided by a combined ten points. Two of those games were against the worst teams in their respective Conferences (Milwaukee, Utah), one to an above average team on the road (Atlanta) and one against the second best team in the league (OKC). In fact, Charlotte played three elite teams in December (Thunder, Heat, Pacers), losing by a total of ten points – which would be promising if not for the fact that they also dropped two games to the terrible Jazz in the same month.

As it stands today, the Cats are four games under .500 with back to back road dates against the Clips and Blazers on the horizon (a combined 25-6 at home). There’s a great chance Charlotte enters the weekend a depressing 14-20 and out of the Eastern Conference’s top eight. While the Cats’ point differential is a semi-decent -1.3 (6th in the East), the NBA doesn’t hand out Playoff spots to teams who lose lots of games respectably.

With just nine games to go before the half-season mark, the Bobcats must figure out which direction this ship is heading soon or risk both missing the Playoffs AND losing their Top 10 protected pick to the Bulls. Ugh.

Pero Antic is a 31 year old rookie center from Macedonia who plainly has a thing for Carlos Boozer’s style. That much we know. We also know that he’s taken a total of 68 shots in his short NBA career, one of which was a fallaway three pointer at the buzzer to send his Hawks into overtime against the instantly despondent Bobcats. It was one of the crazier buzzer beaters you’ll ever have the pleasure of witnessing: 6’10” Al Jefferson has a long arm in Antic’s face, Pero’s shooting foot is facing the opposite basket on launch, he falls away into the Bobcats’ bench and… he NAILS IT from perhaps the toughest spot on the floor – between the corner and extended elbow. Just unbelievable. 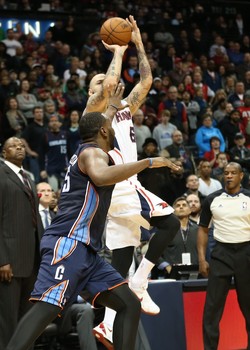 It was the sort of WTF-once-in-a-season shot that can suck the energy right out of a franchise. While it’s impossible to pin the loss two nights later on a Macedonian center playing thousands of miles away, you have to believe Antic’s dagger wound was at the heart of Charlotte’s lackluster effort in Utah. Let’s hope that the Bobcats can recover soon.

Allow me to go Oprah for a moment.

After the Cats two point loss against the Russell Westbrook-less Thunder, Steve Clifford ripped into the team for not executing when it mattered. He singled out individual defense and rebounding in particular and then went on to drop this bomb: “We have to get past the point where everybody is happy the Bobcats don’t get beaten every night. We’re better than that.”

In “The Big Leap” author Gay Hendricks defines a phenomenon he calls the “upper limit” – the highest point on our personal thermostats that we believe we can achieve. Hendrick writes:

“Unfortunately, our thermostat setting usually gets programmed in early childhood, before we can think for ourselves. Once programmed, our Upper Limit thermostat setting holds us back from enjoying all the love, financial abundance, and creativity that’s rightfully ours.”

As evidence, he cites that within two years of winning the lottery, more than 60 percent return to the same net worth prior to their win.

Part of what Coach Clifford is trying to do, perhaps the most difficult challenge he faces, is to transform a perpetually moribound organization’s expectations of itself; to change its identity. One major hurdle in getting to that point is convincing young NBA players who’ve only known losing that their internal thermostats are off. Although long a league-wide punchline, the “Charlotte Bobcats” are not inherently dismal. Just because a player might’ve been involved in a seven win season, does not mean they cannot be a part of a contender in the future…but you must raise the limit. To further Clifford’s point, if being better than terrible is the team’s upper limit, it is not enough. 14-18 is “not bad for the Bobcats” but it’s not good enough.

The reprogramming will take time and will likely need an infusion of sucessful veterans in or around their primes to help break through the glass ceiling. In the meantime, let’s celebrate Steve Clifford’s buzzworthy desire and ambition beacause it’s the only way to truly leave the “Bobcats” legacy behind.