With an away-home back-to-back in Detroit tonight and hosting Orlando Saturday night, it was already shaping up to be a busy weekend for the 1-3 Bobcats.  Now we can add a trade rumor to the mix.

The Cats are in Detroit tonight looking to build on their first win of the season against the Pistons, who are making a nice case for being the worst team in the league.  The Pistons have been in all of their games except the loss to the Celtics, but are nonetheless winless at 0-5.

What’s worse is that the two biggest Pistons stories of the season are finger-pointing between players and coach over a lack of leadership and Charlie Villanueva’s tattling on Kevin Garnett’s over-the-line trash talk.

The latest scuttlebutt is that in Wednesday’s loss to the Hawks, coach John Kuester benched Rodney Stuckey.  Head over to Detroit Bad Boys for the latest on the Piston’s struggles.

Gametime is 7:30 PM ET and the game will be televised on SportSouth (in HD for Time Warner customers on channel 1510! — a quick check last night showed that 1510 had been added to my channel lineup!).

From one extreme to the other.  The Magic are 2-1, having only played three games because their Tuesday night tilt with the Knicks was postponed due to asbestos in the Garden (weird to type that), but are clearly one of the most dominant teams in the league.  Their loss was an ugly one to the Heat, but their two wins were both absolute throttlings of the Wizards and T-Wolves, by 29 and 42 points, respectively.

The Cats will be looking for a small measure of revenge after getting swept out of the first round of the playoffs last spring, but look no better equipped to combat Dwight Howard and company now than they were then.

When Michael Jordan asserted in a recent interview that the “roster churn” was most likely over, we at Bobcats Baseline were skeptical.  The shaky 1-3 start has only reinforced that.

One of the main problems has been mediocre play from Nazr Mohammed (ahem), and a lack of depth behind him.  But with Kwame Brown and Dominic McGuire getting ready to return from injury, I figured Larry Brown and company would at least give those guys a run before making a move.

So I was a little surprised to wake up this morning and see the Bobcats once again leading off Hoopshype.com’s Rumors page.  Via Marc Stein of ESPN.com, the Bobcats and Bulls have been talking about James Johnson.

Johnson is a big, tough 6’9″ 250 lb forward in his second year in the league.  He was drafted 16th overall by the Bulls in the 2009 draft out of Wake Forest and averaged almost 12 minutes per game last year.  He was decent as a rookie, but was looked at as somewhat expendable in the offseason after the Bulls acquisition of Carlos Boozer.

But with Boozer’s preseason boxer’s fracture putting him out for the first several weeks of the season, and Johnson coming into camp in fantastic condition, his future in Chicago was temporarily looking a little brighter.  Johnson’s 2011-12 option was recently picked up by the Bulls after a good preseason, and he had a nice 19 minute/8 point/9 rebound/4 assist/3 block/2 steal/+24 PER night against the Pistons last week.

But with Taj Gibson playing pretty well, Boozer’s return around the corner, and new Bulls coach Tom Thibodeau looking to make his mark on the team and take them deep into the playoffs, Johnson is apparently available again.

What would Larry Brown and the Bobcats be seeing in Johnson?  Probably George Lynch, or Dominic McGuire with a higher ceiling.  Here’s an excellent breakdown of Johnson’s game from Bulls Confidential.

A better question is: what would the Bulls be looking for in return?  They need upgrades at SG and backup PG, but I can’t see the Bobcats being able to accommodate that.  Any ideas, Baseliners?

The Charlotte Bobcats were swept out of the first round by the Orlando Magic 99-90 on Monday night at the Cable Box.  Again, the Cats were able to limit Dwight Howard’s minutes due to foul trouble, and again it really didn’t matter.  Again, the Cats got decent play from a couple of starters and one reserve, and again it was not nearly enough to contend with the Magic.

It’s late and the season is over, so I’m going to keep this relatively short and sweet.  The Bobcats came out and competed, forcing Dwight Howard into foul trouble and taking a two-point lead into halftime.  But the rest of the Magic (particularly Lewis, Carter, Nelson and Pietrus) again picked up the slack, while the Bobcats continued to struggle to score whether or not Howard was in the game.

Despite the continued struggles, the Cats were in in this one until halfway through the final period.  After Tyson Chandler hit two free throws to pull the Bobcats to within one at 77-76,  Michael Pietrus drained a three.  On the ensuing possession, Dwight Howard snatched a DJ Augustin layup out of the air.  While the crowd and the Bobcats benched yelped about the lack of a goaltending call, Pietrus drained another three.  The sequence took less than a minute and completely took the air out of the the arena.

And if you were hanging on to any hope that the Bobcats could come back from seven down with six minutes left, two missed free throws by Gerald Wallace, followed by another Jameer Nelson three to put the Magic 86-76 with under five minutes left was enough to convince even the most optimistic Cats fans.

The Bobcats were actually led by Tyrus Thomas, who rang up 21 points on 9-12 FG and added 9 rebounds in 29 minutes off the bench.  Tyrus had the baseline 12-15 footer going early and was actually 8-8 from the field at one point.  But just as in the first three games, no other Bobcat produced off the bench.

The Elephant In The Room

And now the Bobcats enter what is shaping up to be a very difficult offseason.  Michael Jordan’s mettle as owner will certainly be tested.  We’ll certainly be writing more about this in the coming days and weeks, but here’s a quick primer:

Playoff basketball returned to Charlotte on Saturday, but the inspired Bobcats still couldn’t quite get over the hump and fell to the Orlando Magic 90-86.  Jameer Nelson continued his domination of the Bobcats with another 32 point effort.

Game 3 is usually the lower-seeded team’s best chance to steal a game in round one of the NBA Playoffs (e.g. the Bulls and Thunder earlier this week) and this was no exception.  A fired-up, sellout crowd donned giveaway Jordan Brand Bobcats t-shirts and waved towels for a “whiteout” that drove the Cats to an improved performance relative to Games 1 and 2 in Orlando.

The Cats got off to a decent start per the scoreboard, trailing the Magic just 29-27 after the first quarter.  But if you look back on it, that first quarter can really serve as a microcosm for the whole game.

The Cats had a chance, though.  Down one with 31 seconds left, Larry Brown used a full timeout, then added another 20-second timeout to draw up what must have been the world’s most complicated basketball play.  It worked, too.

Early in the set Stephen Jackson popped off a screen at the three-point line and had a wide open look.  Some will criticize the fact that the first option on the play was a look at a three-pointer when the Cats were down just one with 30 seconds left, but let them criticize.

This is one of the best basketball minds in the world, a master at drawing up plays in timeouts we’re talking about, teamed up with Stephen Jackson, Mr. “I Make Love To Pressure”.  A three probably would have won the game.

Unfortunately, Jack did not come through.  The shot was short, Orlando grabbed the rebound, the game, and any remaining hope that the Bobcats could make this a series.

The Orlando Magic scored another definitive victory over the Charlotte Bobcats, 92-77, in Game 2 of their first round playoff series on Wednesday night.  Stephen Jackson led the Bobcats with 27 and keyed a fourth quarter rally that briefly made things interesting late, but the Magic ultimately led wire to wire, putting all five starters in double figures.

This one had an even uglier start than Game 1.  8 minutes into the first quarter, the two teams had only combined for 16 points; problem was, the Cats only had three of those.  Fortunately, the Cats got a few buckets to make the count a not-quite-as-embarrassing 18-14 after the first quarter.

But frankly, the damage had been done.  Orlando’s zone-ish defense rendered the Cats offense (not exactly potent to begin with) into a bogged-down, turnover-filled mess.  The Cats finished the game with 21 turnovers, and no one outside of Stephen Jackson ever figured out how to score.

The fact that the Bobcats  play some pretty good defense themselves kept the game reasonable; the Cats were only down 11 at the half, and cut the lead to 8 with 3:15 left in the game before succumbing.

The Magic simply had too many weapons tonight.  Though Dwight Howard was held to a modest line (15 points on 5-10 FG/5-12 FT, 9 rebounds, 2 blocks) he was absolutely dominant for a stretch early in the third quarter that set the tone for the rest of the second half.

Vince Carter, infamous for shrinking into a jump-shooter when the going gets tough, had smooth sailing into the paint all night long, resulting in 9-11 free throws.  (As a team, the Magic shot 35 free throws.)

Rashard Lewis and Jameer Nelson were solid and reliable, if unspectacular, while Mickael Pietrus and Ryan Anderson provided an onslaught of threes off the bench, combining for 5-7 from distance.

There were almost no silver linings for the Bobcats in this one.  The late run that cut the deficit to 8 was intriguing for a minute, but rationally you knew it was too little, too late.  Nazr did show some signs of life (5-6 FG for 10 points in 16 minutes).

But basically, I’m grasping at straws here.  The only one that may be worth a damn is simply that the Cats have played much better at home this year and Games 3 and 4 are in Charlotte.  The Cats had the biggest home/road record differential amongst all the playoff teams this year, for no reason that anyone could logically explain.  At this point, I’d give up trying to explain it if I could just see it for Games 3 and 4.

If you needed any extra juice to get pumped for tonight’s Game 2, just check this quote from Larry Brown from Tuesday’s practice regarding the Magic’s activities on Monday (via Rick Bonnell):

Did I just figure out a cheap way to tie in a Guru tribute to a Bobcats blog?  Sure.  Was it worth it?  Hell yeah.

Be sure to check us at Whiskey Warehouse in Plaza Midwood for a Bobcats Baseline Game 2 Watch Party: 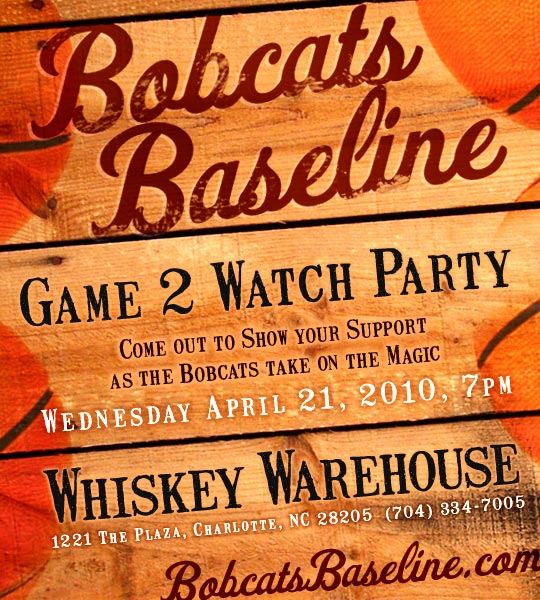