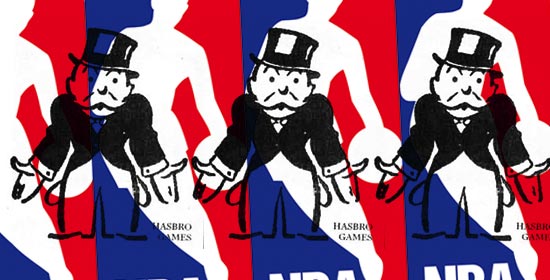 It’s the number you get when you take the Bobcats $69.24 million in salaries for the ’09-’10 season and subtract it from last year’s $69.92 million luxury tax threshold.  Six hundred and eighty K.  That’s approximately how close the Bobcats came to paying the luxury tax last season.  I say approximately as I’m basing the figures on Hoopshype’s excellent salary database — a database that doesn’t included Derrick Brown’s two year rookie contract.  (For the sake of this column, I’m estimating his cap figure to be equal to Milwaukee’s Jodie Meeks, drafted one spot behind Brown in last year’s second round.)

That’s how much NBA teams are expecting to come off the cap next year.  You read that right, the Salary Cap will shrink next year and with it the luxury tax threshold.  According to ESPN.com’s Chris Sheridan, the tax line will lower to around $68 million in ’10-’11 which would put the Bobcats at less than $8 million under the tax threshold before re-signing starting PG Raymond Felton (unrestricted), PF Tyrus Thomas (restricted) or valuable role players Stephen Graham and Theo Ratliff (click chart to see a larger image). 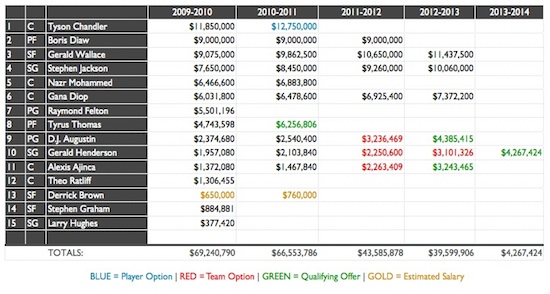 1. THE CENTERS OF ATTENTION

The Bobcats have $27.5 million (roughly half of their cap space) committed to the center position and the last time I checked, none of those guys were named Howard, Duncan, Ming or Gasol.  Years of poor financial decision making have finally caught up: overpaying Emeka Okafor when they didn’t have to (Chandler), overpaying Matt Carroll when they didn’t have to (Diop) and bailing out Joe Dumars with the expiring contracts of Walter Herrmann and Primoz Brezec (Mohammed).
THE BAD NEWS: With the a possible lockout on the way in 2011, none of these guys are moveable unless the team is willing to take on another equally bad (if not worse) contract in return.
THE GOOD NEWS: Over $19 million will come off of the books for good in the summer of 2011 if the ‘Cats just hold tight and let Mohammed and Chandler play through their contracts.
Somebody take Larry Brown’s mobile phone privileges away pronto!

2. TYRUS THOMAS AND THE POISON PILL

The Bobcats didn’t send Chicago a future first round pick just to rent Tyrus Thomas for three months.  The intention was always to retain him for at least another season but given the Bobcats’ cap situation that might not be so simple.  As a restricted free agent, Thomas could command a salary north of the $6.2 million qualifying offer he’s due based on his rookie deal.  A team intrigued by Thomas’ potential and armed with enough cap space could offer Tyrus big money up front, signing Thomas to the dreaded “poison pill offer sheet” (see Milsap, Paul) during the summer.  Such a contract could offer Thomas $8 million in year one, $6 million in year two and only $4 million in year three.  The Bobcats would have the right to match but in doing so would essentially be “luxury-taxed-out,” unable to sign any other players (including a starting PG) without paying the dollar for dollar tax penalty — which is something Michael Jordan has repeatedly said that he will not do.  With so many teams flush with cap space this summer, the Tyrus Situation could get tricky.  Watch out for it.

Ray Felton is the best point guard available in a weak PG free agency class.  Again, it is entirely possible that a team flush with cap space could offer him $18 million or more over three years and in that situation the ‘Cats would have to fold.
Doubt that the team would let it’s starting point guard walk this summer?  The organization fiercely pursued a T.J. Ford trade during February’s trade deadline and weren’t even close to coming to terms on a long-term offer with Felton’s agent last summer.  If Raymond was a better shooter from outside and could finish with a little more consistency inside (not to mention stay in front of Jameer Nelson) maybe the team would go out of it’s way to sign him but I just can’t foresee it happening.  The ‘Cats will most likely have to acquire a starting PG via trade or from the free agency discount rack.

Yes, Bobcats fans, your team is in a major salary cap quagmire.

To further complicate the issue, the Bobcats can’t afford to simply allow their free-agents to walk and replace them with low-cost scrubs or cheap rookies.  The team doesn’t have any draft picks (instead they have Alexis Ajinca) and from a business perspective, the organization must improve their on-court product (or at least repeat last year’s success) in order to expand fan support and capitalize on their inaugural Playoff run.

The Bobcats head into the summer with three major needs:

STARTING POINT GUARD
D.J. Augustin is clearly not ready to start and the Bobcats are too capped out to pay Raymond Felton market value.  They’ll need to make a trade or find an undervalued bargain replacement in Free Agency (see Blake, Steve).

LOW POST SCORING/REBOUNDING
Boris Diaw has a few low post moves but plays mostly on the perimeter and doesn’t concern himself very much with the art of rebounding.  Tyrus Thomas (if he’s re-signed) is a solid rebounder but has limited abilities as a post scorer.  The team will need to either trade for or sign a traditional low-post power forward to team with Thomas or Diaw.

CONSISTENT PERIMETER SCORING/SHOOTING
Larry Hughes turned out to be an inconsistent version of Flip Murray.  Sure, Hughes was a better defender but what the Bobcats really needed was offense from the bench.  Murray has said that he’d happily return to Charlotte next season.  If the ‘Cats could bring him back for a similarly low priced deal next season, they should.

So how does a Capped-Out team retain talent and, dare I say it, even improve heading into next season?