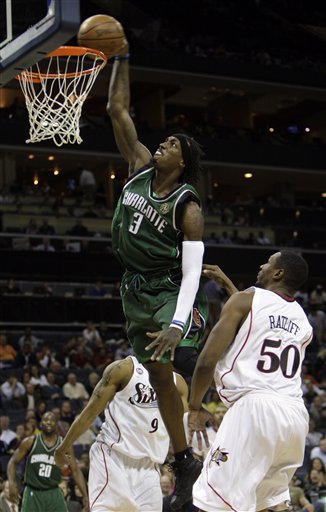 Biggest story of the night?  How about the Sixers putting up 31 points in the third quarter compared to 20 for the ‘Cats.  Philly’s young legs ran all over the place making Charlotte look as slow and old as…well, as they are.

2. My point: During a key stretch in the 2nd quarter, the supposedly young and inexperienced Bobcats trotted out a lineup featuring Nazr Mohammed (31), Juwan Howard (35) and Raja Bell (32).  I really hope Larry Brown has a plan because if this team isn’t going to be any good, you’d rather them be young and shite versus old and shite.  I mean yeah, GForce, Okafor, Augustin, Diaw and Felton are all in their early-mid 20s but none of those guys is a superstar or even an all-star.  So what exactly is with all these geezers on the floor taking up minutes?  Is the ‘Cats philosophy to “grow old and lose gracefully?”  Midway through the 4th DJ tried to find Juwan for an alley-oop.  Embarrassing is the only word that comes to mind.

3. Sean Singletary got the start.  Raymond Felton and DJ Augustin came off of the bench.  Wait, did I really just write that?  Man, I really hope Larry Brown hasn’t gone senile on us all of a sudden.  The supposed reason that Sean started was that he was playing in front of his “hometown crowd.”  What is this?  Dean Smith Senior Night Redux?  Since when do no-name rookies (on their 3rd teams in six months) get spot starts over healthy incumbants?  Does Steve Blackman get to wrestle in the main event (with kendo sticks) whenever he’s in Philly as well?  Alexis Ajinca is jacked for the ‘Cats next exhibition game in Saint-Etienne.  Anway, Sean only played 9 minutes and looked a little shaky holding on to the ball in that limited time.  Not something you like to see in your PGs.

4. The Sixers pre-game show featured all sorts of Larry Brown love for Philly and the Sixers in particular.  He couldn’t stop drooling over their roster and thier players and their coach, etc, etc.  The whole episode felt weird.  I’ve never seen an opposing coach so openly enamored with their opponent.

5. Okafor had a great game with 24 and 9 with a couple of blocks as the team seemed to really look for him in the post.  Unfortunately GFORCE and Boris couldn’t add ANYTHING as they went a combined 5-23 from the field.  Bonnell attributed this to Dalembert’s patrolling of the lane and that may have had something to do with it.  Or it could have just been an off-night.  Really, outside of the SG combo of Carroll and Bell (nice game back with 13pts on 6-9 shooting) and Felton nobody else could get anything going.  Augustin got served by Louis Williams all night long and Morrison logged another DNP-CD.

6. The Sixers looked great in the second half.  The team has so much energy and their young guys (WIlliams, Iggy, Dalembert, Speights, Young, and Green) really make the game fun to watch.  It’s no wonder they play better without Elton Brand.  The guy just doesn’t match their style.  I’m really interested to see if Philly deals Brand before the Break to a slow-ball team like the Heat (or the Bobcats) in order to unload unnecessary salary.

7. What else is there to say?  Bobcats drop another winnable game on the road and I absolutely have NO IDEA what the direction of the team is.  Yeah, Okafor looks like a keeper.  And DJ plays ok when he’s not gimpy.  GFORCE is a very good NBA starting SF.  Diaw is alright at PF.  But where is the star?  Where is the guy who will get you 20pts a night regardless?  Looks like the ‘Cats will just have to live with drafting Morrison over Brandon Roy and not make the same mistakes again.  I stand confused.