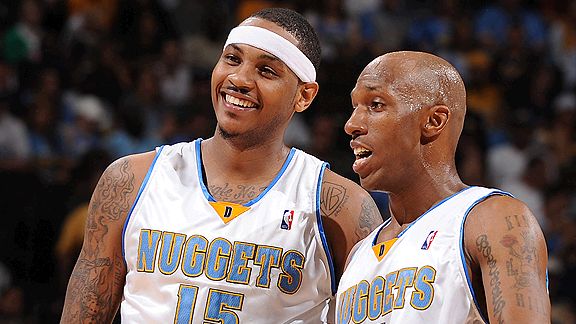 MEgo-Mania© has again swept the Association with the latest contestent being none other than Johnny Sucker Punch himself, Carmelo Anthony.  Within hours of Ric Bucher’s ‘Melo scoop, the national rumor mill threw little old Charlotte a bone by insisting that the Bobcats were, in fact, a legitimate dark horse to land Carmelo due to his Brand Jordan ties and the Nuggs cap-strapped lust of Erik Dampier’s insta-expiring contract.  Immediately the internet was flooded with columnists, blogs and commenters weighing in: “What could the Bobcats possibly send Denver to pry ‘Melo away!!!???  Gerald Wallace and Damp’s expiring?  Throw in some draft picks???  Derrick Brown and Gerald Henderson too!  Maybe some cash?  And take back Kenyon Martin’s dead weight contract, yeah, that’d would at least make ‘em think about it!!!”

With Steve Austin making a comeback splash this summer in The Expendables, let me channel the spirit of Stone Cold in my response to this nonsense:

“Carmelo Anthony, what?  That mealy-mouth sonofabitch, what?  Couldn’t play lock-down defense on a Roomba, what?  Sucker-punchin’ yellow belly beady-eyed overrated idiot, what?”
(CUT TO: Stone Cold  Stunner on ‘Melo, Austin mocks an incapicitated Carmelo with a two fingered salute while wearing a black t-shirt and jean shorts.  WHAT?)

Someone please refresh my memory.  What exactly has Carmelo Anthony accomplished during his first seven seasons in the Association?  At least Lebron has been to an NBA finals.  Melo can’t even say that.  He’s a high-octane scoring dynamo, a one dimensional player who has a catchy name and often plays on national television.  Basically, he’s the new Vince Carter.  End of story.

I would have no problem (with) flipping (Wallace) with Carmelo Anthony on more than a few nights. Anthony’s offense is as good as Wallace’s D, but Wallace’s offense is so, so much better than Carmelo’s defense.

QUICK LOOK AT GERALD WALLACE (IN COMPARISON TO CARMELO):

So why would the Bobcats consider anything other than a straight swap of Wallace for Anthony?  Simple, Carmelo’s perceived value is higher.  Higher in the mind of the casual fan and higher in the mind of televsion executives who decide which teams get national broadcasts.  Mark Mainstream hears the name “Carmelo Anthony” and associates it with “talented.”  Again, ‘Melo is the new Vince Carter.  The Bobcats are still trying to lure in fans and establish an identity while trying to prevent another season of full-scale financial catastophe.  ‘Melo’s perceived value and name recognition could help.  I just hope the team doesn’t severely over-pay in order to get him.  Now back to our regularly scheduled programming:

If anything worthwhile has come out of these ME-lo rumors, it’s the fact that the billionaire Kroenke family has grown tired of dropping $20+ million in luxury tax payments to the league every year.  As previously mentioned, the Nuggets aren’t exactly lining the halls with Larry O’Brian trophies so cutting team salary this year (with the Lakers, Celtics, Magic, Heat clearly ahead of them) makes a lot of sense.  There’s been a lot of talk of a Chauncey Billups/Dampier straight up swap and I’d be all for it except for the fact that the ‘Cats are currently $8 million over the tax line and need to shed salary fast.  There’s no question that the Nuggets would pull the trigger on a trade that would save them $26 million this season but in order for the ‘Cats to make it happen, they’ll need to make another deal first.

In order to get underneath the luxury tax, the Bobcats need to shed around $8.5 million dollars from their current payroll.  Fortunately, they might have a couple of ways of doing this in Boris Diaw (plus picks) or a Nazr/Augustin combo.  If I’m MJ, I’m on the phone with David Kahn right now whispering, “y’know, we have this young point guard prospect who we-“  KAHN: “Point guard Prospect???!!!  Did you say Point Guard?????!!!”

The Knicks might also be inclined to take on former D’Antoni favorite Diaw while gaining back a first round pick that can be used in the next decade.  (Although I would be a little concerned that the Diaw/Eddie Curry combo might do to IHOPs what Ewing and LJ did to The Gold Club in the late ’90s.)

In the following scenario, let’s say the ‘Cats find a taker for D.J. and Nazr (even if they have to throw in a protected future first), then…

The Bobcats suddenly accomplish both of their current offseason goals: Upgrade the Point Guard position and Get Underneath the Luxury Tax.  The team heads into the preseason with a relatively stacked roster. 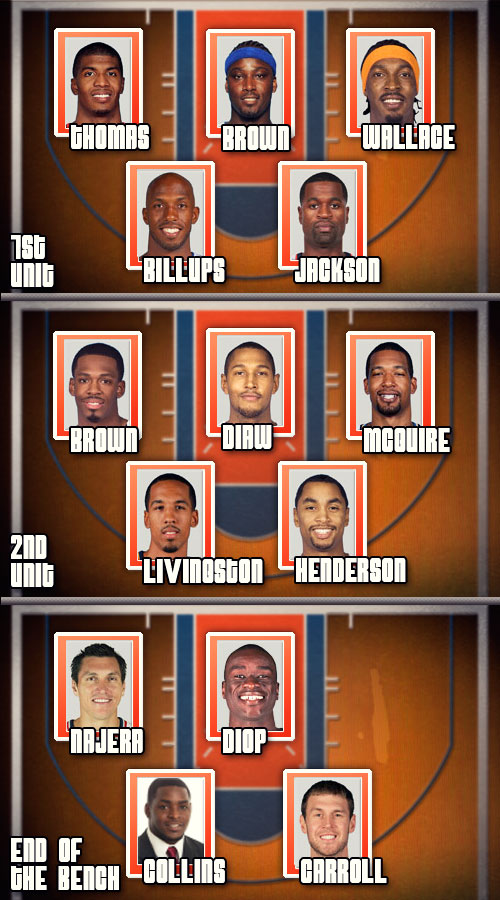 Kwame and Diop would try to replicate last year’s Mohammed/Chandler/Ratliff center by committee while a now “huskier” Boris Diaw would rotate between the 4 and 5 spots when Coach Brown goes, uh, “small.”
Chauncey and Shaun Livingston give Larry Brown much bigger options at the point.  McGuire, Derrick Brown, Henderson, Tyrus Thomas plus Crash, Livingston and JAX give Larry Brown a metric ton of “long, athletic” wing players to do his magic with.

From a cap perspective, the Bobcats stay right at the tax line this season while maintaining flexibility going forward.  Billups has a team option for the ’11-’12 season which will almost certainly not be exercised as the league goes into a lockout.  The Bobcats could use their leverage with Billups’ current deal to sign him to a three year contract extension at a much lower per year salary next summer.

A Billups for Dampier swap makes a great deal of sense for both teams as Denver could save tens of millions this season by promoting Ty Lawson and dumping Chauncey.  The Bobcats would likely cement their rise to the top 4 in the East this season by upgrading from Raymond Felton to Billups.  Hmmm…  What else is there to say?  Bobcats win and win big.

Until next time, Enjoy the Offseason Bobcats Fans.