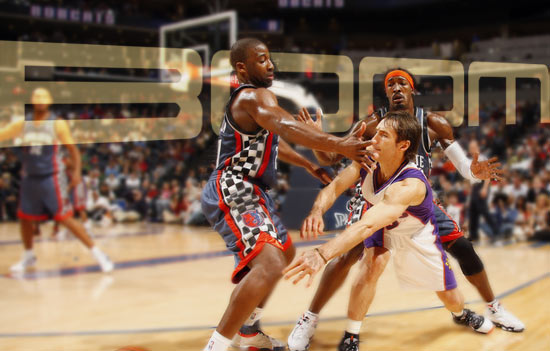 The Charlotte Bobcats blew out the Phoenix Suns 98 – 76.  [ Recap and Box Score ] A huge win in front of a good crowd on a Friday night.  The Bobcats seemed to have played beyond their potential on both sides of the court and secured the game early.  More impressive than the huge win, was the style and continued effort that they exercised until garbage time in the fourth.

The main draw going into the game was the story of the traded players facing their previous teams, the Suns with JRich seem to be slipping lately and the Bobcats have experienced an infusion of a winning mentality with Boris Diaw and Raja Bell.  The secondary draw for the game was the “Nascar Night” theme at the arena.  The Bobcats partner with Nascar for a series of cross-promotional events and this is the Bobcats opportunity to pull in some of the dollars that Nascar generates from its supporters.  Annually, the Cats sport a “checkered stripe” jersey with some alternate lettering on their blue alternates.  This is horrible look but if the jerseys help the team play like they did Friday, no one would complain.

The game started off like any other – some back and forth between the teams as they worked to figure each other out.  Then, slowly the Bobcats started to eliminate any offensive opportunity by the Suns.  The once “high octane” Phoenix Suns had only 13 points after the first quarter.  The second quarter started with Phoenix putting the ball right into the paint for Shaq.  It seemed as if the game played out just as Larry Brown had planned.  Sure, Diop and Mohammed were stiffs and made Shaq look like his days with the Magic.  Still, the Bobcats had enough of a lead to make that slow pace of play ineffective if they kept trading shots.  The Cats played almost like a football strategy at that point.  They allowed the Suns do their slow inside work, but none of the fast paced scoring ever got rolling.  Charlotte played the best 3 quarters of basketball anyone had seen them play and the game was decided before the final quarter had begun.

As for the traded players, Raja Bell did a great job of containing Jason Richardson and Boris Diaw had a stellar performance against the team that benched him.  J Rich hit a few difficult three pointers, but it felt like the way he scored for the Cats – Wow, he hit that, now they’re only down by 15!  As a whole the Bobcats just played smarter and were led by Gerald Wallace, who excelled in every part of his game last night.  Wallace slashed by the Suns on several drives and hit a couple three pointers within a span of a minute that just squashed the Suns’ momentum.  G-Force took part in the Bobcats’ collective effort to force a load of turnovers and keep the Suns desperate to catch up.

The free agent signing of Juwan Howard was a solid move, but the rest of the bench really contributed little.  Adam Morrison seems to have no place on offense, although that is supposedly his strength.  Desagana Diop still need some time to become productive with the Bobcats.  At this point, he’s more useful than Ryan Hollins and the team won’t waste offensive possessions on him like they did Matt Carroll.  From here, he can only improve.  Just after the Phoenix trade, many argued that the Cats would miss a lot with the departure of Jared Dudley.  From the looks of Dudley’s prime garbage time stretch, that’s hardly the case since the swap.

The Bobcats are now 7 games below .500 and talking about reaching for one of the last Playoff spots.  If they play nearly this strong for the rest of the season, there’s a real chance that this will be the year that the Cats suit up for the postseason.