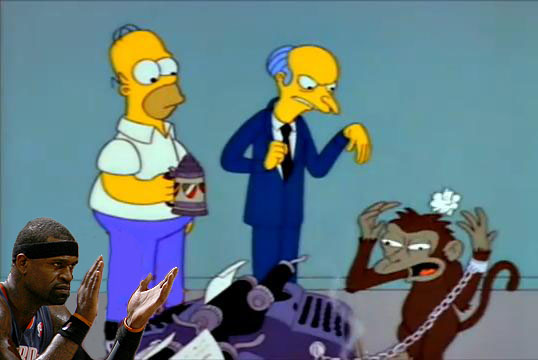 If there’s one Simpsons quote to describe this 2010-11 Charlotte Bobcats season, it’s probably that one, though it would fit better if it were reversed.

Regardless, this season for Charlotte fans has practically been a tale of two extremes. While during some games, they’ve looked like the worst team in the NBA, other nights they look like they’re a talented and competitive team.

Undoubtedly, the largest catalyst for this turnaround has been the coaching change from former head coach Larry Brown to interim head coach Paul Silas.

Larry Brown, though one of the greatest NBA head coaches of all-time, just was not effective as the head coach of the 2010-11 Bobcats. He made questionable lineup and substitution decisions and the team that was once known for swarming defense had acquiesced to a very mediocre status. The promising, much-anticipated season declined into a depressing elongated sigh of a year. The team began with a figurative stumble over their own shoelaces, starting the season with a 1-6 record. Then in December, the stumble became a full-fledged fall onto their face as the team dropped games by 20+ points to teams like Memphis, Philadelphia, Washington, not to mention the elite teams like Boston and Oklahoma City.

Change was necessary. Larry Brown was much more melancholy at post-game press conferences. He seemed to no longer enjoy coaching the games and often had a look of resignation plastered on his face.

That look of resignation shortly transformed into a real resignation, as Larry Brown and the Bobcats came to the decision as what was called a “mutual decision” (*raises single eyebrow*) for him to step down from his head coach position.

The effect was nearly immediate. The Bobcats, though playing the dregs of the NBA’s Eastern Conference, were playing more efficient on offense and defense. Interim head coach Silas had decided to try to develop the rotation’s young talent more than his predecessor and gave Gerald Henderson more playing time. Since Silas’ arrival, the Bobcats are 12-10, a respectable record (especially with two recent games against elite teams). More impressive was their 4-2 record on their recent road trip. Considering the Bobcats have suffered a couple of significant injuries during this time, Paul Silas’ record is all the more remarkable.

And that leads me to the point of this article: the Bobcats should offer Paul Silas a contract to become the official head coach and not just on the current interim basis.

I understand that the CBA negotiations complicate the situation, but at any rate, the Bobcats should get Silas to coach in the following seasons.

Just look at the change in the players’ attitudes from Larry Brown to now under Silas. D.J. Augustin has been unleashed, as he flourishes in a faster, more free-flowing offense. The players are more comfortable because Silas is encouraging the players to have more feedback so he can respond and teach them how to better themselves. Plus, look at the coaching staff that surrounds him. They’re doing an outstanding job helping Silas coach up the players. Just look at Charles Oakley’s work with Kwame Brown: about 9 points per game and 9 rebounds per game in the month of January. And that’s just one example; this team’s success is a testament to their coaching ability.

Another quality of Silas’ coaching that can’t be overlooked is his experience. Since his first year as a head coach for the Charlotte Hornets, Silas has compiled an impressive coaching record of 289-240, or about a 55% winning percentage. Winning 55% of your games is usually good enough to get in the playoffs as the 6th or 7th seed in the Eastern Conference. Speaking of playoffs, Paul has also been to the playoffs four seasons, helping the Charlotte Hornets reach the Eastern Conference Semifinals in 2001. Don’t doubt the man’s experience.

On the flip side, if there was one main qualm I had about Larry Brown’s coaching style, it was his mule-like stubbornness when it came to playing veterans over the young guys. After all, it’s not often when a coach doesn’t play a first round draft pick more than 355 minutes in his rookie season without injury playing a large part in hindering their season (Henderson). And in this domain, Silas exceeds Brown by miles upon miles. Gerald Henderson already has 250 more minutes of playing time this season than he had all of last season. Even in this season alone, Henderson’s minutes per game under Larry Brown doubled in the Paul Silas era (11.78 to 22). And Henderson has responded, dropping double digit point totals in four of the last nine games. Silas has even managed to get Sherron Collins some experience lately, as well as Derrick Brown. Coach Silas inspires confidence in his young players which encourages their development as NBA players.

For those out there who think there’s someone better out there, who do you think is superior that’s also available? Jeff Van Gundy? Puh-leez. Jeff enjoys his cushy job at ESPN too much to leave it for a developing small-market team. Mike Brown? He’s basically Larry Brown Lite – strong defensive principles and very limited offensive coaching. I can’t think of any other coach with as much experience or versatility as Paul Silas.

How about we just ask D.J. Augustin? “I would love to see him be the permanent coach. He’s great for this team organization and the whole city.”

So there you have it. We’ve already seen the blurst of times. With Paul Silas at the helm, I think he gives the Bobcats their greatest shot at getting to the best of times.

Edit: More than just a few readers have brought up Silas’ age. I don’t see it as much of a factor. I’m not saying we wrap up Paul for the next ten years – just three or four. I haven’t heard any talk of Jerry Sloan ever stepping down, and he’s a year older than Silas. Also, George Karl has had some serious health concerns and he’s currently in negotiations with Denver to re-up his contract for another three years.