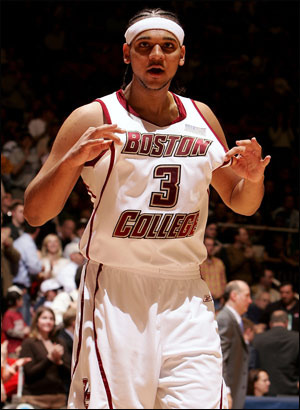 In a game they really needed to win, the Bobcats fall to the Bucks 101-96 and head home for a tough game Saturday night versus Lebron’s Cavs.  AP Recap here.  Box score here.

1. You would’ve really hoped that the ‘Cats could steal another one on the road tonight against a mediocre team because the schedule gets from considerably more difficult from here on out with 5 of the next 6 opponents playoff teams fom a year ago.  That said, there were a lot of positives from this game…

2. Emeka Okafor continues to shine.  The big man registered 19 points and 8 boards on 9-11 shooting while holding longtime nemesis Andrew Bogut to only 10 total points.  Emeka looked very sharp and assertive especially during the third quarter when he aggressively called for the ball and knocked down a couple of nice 12-foot jumpers.  Very nice work from Emeka tonight.

3. Jared Dudley was borderline spectacular in 22 minutes scoring 8 points, 3 boards and most surprisingly, 3 steals(!).  Seeing JD run a “Showtime” fast-break had me in tears laughing–“dumpy” is a good word to describe his physique.  The best move was on his third steal during the second half.  JD, “blew by” former Bobcat Malik Allen going to the rim on a 1 on 1 “fast” break, getting fouled and then rolling into a ball near the baseline cameramen.  Does JD’s game shorts come in a size “husky?”

4. Raymond Felton shot the ball a lot better tonight (8-14) and kept up his recent Assist/Turnover Dominance with 8 dimes and 2 turns.  Ray hit a couple of very nice jumpers coming off screens and did a good job harrassing the Bucks defensively.  We should note that Raymond hurt his elbow going to the basket mid-way through the fourth quarter but came back into the game immediately after a timeout and played out the rest of the quarter.

5. Not much more you can say about this loss.  The home team shot 10 more free throws than the ‘Cats and grabbed 7 more offensive rebounds.  The ‘Cats shot well but unless you have a Lebron or Kobe on your team to close out the game, your gonna be at the mercy of the officials in situations like this–and on the road, that ain’t gonna cut it.

Good effort from the ‘Cats.  The record now stands a 7-12.  Lets see if they have enough in the tank to shock the 16-3 Cavs tomorrow night at the TWC.