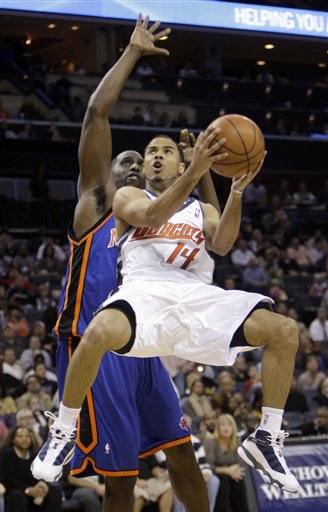 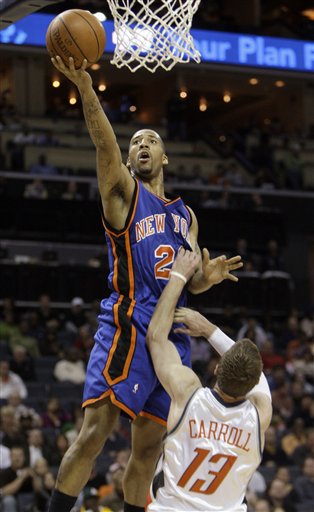 2. The opening tip was delayed for a few minutes as the game officials attempted to get the shot clocks going — so I finally got to hear the rest of that Rihanna song.  I wasn’t missing much.  And now I can’t get it out of my head (“Live your life! blahblahblahblahblahblah!  Live your life! — Aaaaaarrrggghhhhh!!!).  Let’s see if we can replace it with something better… ah yes.  Hilarious video, btw.

Anyways, they played the whole first half without the shot clocks lit up.  The arena announcer gave the “10 second” and “5 second” warnings a few times, but didn’t have to do it much.  Towards the end of the second quarter, the scoreboard stopped updating, too — so they just put the video of the game up and announced the score.  Oh, and the horn for timeouts and substitutions wasn’t working either, so a manual airhorn was used.  I’m not joking…

The problem was apparently solved at halftime, and there were no further glitches in the second half.

3. Interstingly, the Knicks really blew the Bobcats out in the first few minutes of the game, getting out to a 17-6 lead after 6 minutes, 32-15 after 9.  Only the players could answer this for sure, but I have to wonder if not having the shot clocks up was more of a disadvantage for the Bobcats offense.  See, the Knicks under D’Antoni are used to coming down and getting a decent shot early in the possession (Seven Seconds or Less, right?), while the Bobcats under Larry Brown have been taught to be patient and probe the defense until a good shot eventually presents itself.  Without the shot clocks up, maybe the Bobcats were unnerved and looked to force up shots they weren’t accustomed to early in the possession?

4. Whatever the case, the Cats eventually stabilized things and started chipping away at the Knicks’ lead.  Gerald Wallace had a decent game, ending with 21 points on 8-15 FG, 6 rebounds, 2 assists, 2 steals, and a block.  At the end of the third, Charlotte trailed by just six (74-68).

Make no mistake, though.  This was an unpleasant game against two lottery teams that was tortuous to watch at times.  With Raja Bell out, Larry Brown spread the extra minutes at the two around between Matt Carroll, Adam Morrison, DJ Augustin and Sean Singletary.  As if playing DJ and Raymond together hasn’t driven me crazy enough, Brown has now taken to playing DJ and Sean Singletary together in what has to be the smallest backcourt combination in the league.  Seriously, there can’t be another team in the league that has put two sub-6 foot point guards on the floor at the same time this year.

And as if he was actually trying to make my head spin a la the Exorcist, Brown actually played DJ, Singletary, and Raymond together for a stretch.  I wish I was kidding.  I mean, I know it’s against the Knicks, who routinely employ David Lee and Jared Jeffries as their “center”, so you’re more than welcome to play some smallball, but all three point guards at once?  With 6’1″ 200 lb Raymond Felton playing the three?

Can we add this instance to the Larry Brown Senility Watch?

5. In fairness, it’s not like Matt Carroll or Adam Morrison were lighting the world on fire.  Carroll played 14 minutes and went 2-6 from the field.  Morrison, fresh off being called out by Bobcats beat writer Rick Bonnell, played an awful 13 minutes off the bench, going 0-3 from the field.  All were 3 point attempts — the middle one was an airball that drew heavy boos from the crowd.

With Raja Bell out and the Bobcats looking for a spark, wouldn’t it have been a good night to give Shannon Brown some run?  Especially over Sean Singletary?

6. On to the fourth quarter, where the Bobcats made a patented “It’s the NBA, every team is going to go on a run” run.  Led by some timely 3 pointers from Diaw, the Bobcats closed the gap and had the crowd into the game.  Felton hit a 3 to momentarily give the Cats the lead at 83-82 with four minutes left, and a couple minutes later Diaw hit another one to tie the game at 87.

Wilson Chandler then hit a couple of free throws to put the Knicks up 2 with less than a minute.  On the ensuing Bobcats offensive possession, the biggest one of the game, what do you think happened?  Hint: it happens down the stretch in pretty much every close game the Bobcats play and rarely turns out well.

You guessed it: a missed Raymond Felton layup, with no foul drawn.  I swear, every team must have a line in their scouting report on the Bobcats that says something like: “Felton: let him drive, especially with game on line; poor finisher at the hoop.”

On the next sequence, Duhon got to the hoop, missed a layup himself, grabbed the board, missed the putback, grabbed the rebound again in a scramble, and was fouled by a frustrated Boris Diaw.  Duhon hit the free throws to put the game away.

7. Looking back, Okafor never got into the flow much tonight.  13 points on 5-11 FG and 15 rebounds is a decent line, but he really wasn’t much of a factor.  He was being guarded most of the time by David Lee, who seemed to do a good job on him.  Nonetheless, the Cats probably should have looked inside a bit more.

8. Overall, a bad game for the Cats.  After the recent stretch of winning 4 out of 5, it seemed like the addition of Diaw was working out nicely and Brown was starting to get the team playing “the right way.”  But these last two home losses to the Nets and Knicks have been killers, and tonight in particular the Cats were as bad as ever.  Not to mention that while only a little over a third of the season is done, half of our home games are in the books.  Any improvement that Larry Brown can muster out of this bunch will have to be done with a road-heavy schedule the rest of the way.  Happy freaking holidays, Bobcat fans.

9. As if I needed another reason to feel depressed, Tom Ziller posts on NBA Fanhouse that the Bobcats are at the head of the “Vortex of Suck” in the NBA.  He points out that, while the Bobcats currently don’t have nearly as bad a record as the Thunder or Wizards, they have less potentially great players on their roster and far less financial flexibility.  I would argue that the Wizards, who have Gilbert Arenas and his bad knee on a max contract, might be in even worse shape than the Bobcats, but Ziller’s point is well taken.

10. Next two games are at Milwaukee Friday night, then hosting Milwaukee Saturday night.  Lets hope the Cats can get back on track.  Happy New Year, everybody.