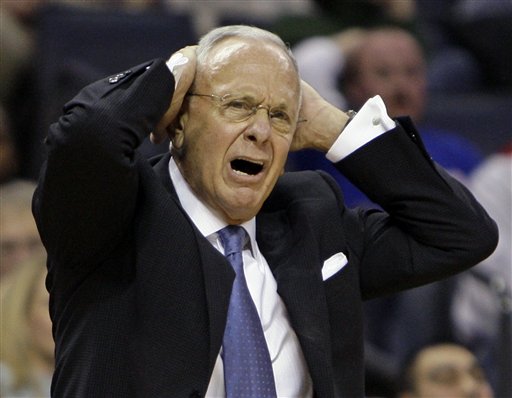 2) Had to give up my tix for this game, as fellow Baseliner Deesdale picked Saturday night to have his White Elephant Gift Holiday Party.  I brought a Darth Tater, but of course ended up with something decidedly less cool.  I initially stole this “Big Daddy Pimp Cup” from someone; but it was quickly stolen away from me.  I ended up with this crappy Christmas Carol Clock, which, unsurprisingly, was not stolen away from me.  Oh well, great party anyways, Deesdale.

3) The story of this game was the 4th quarter run the Bobcats put on to make the score respectable.  After a predictably ugly first two and a half quarters (Bell and Diaw started despite not even getting in a practice with the team yet; Gerald Wallace was back and rusty after missing 3 games this week due to the death of his grandmother; the Pistons led 51-33 at the half) the Bobcats got into a little groove late in the third quarter and eventually cut a 29 point lead all the way down to 1 with under a minute left in the fourth.

The Cats did this primarily with a lineup of Felton, Augustin, Morrison, Wallace and Hollins against the Pistons reserves: Bynum, Afflalo, Herrmann, McDyess and Maxiell.  With five minutes left, Michael Curry had seen enough and put Stuckey, Rip, Prince and Sheed back in the game – Curry was understandably angry with his reserves after the game.

In a curious move, as the Pistons put their starters back into the game, Larry Brown removed Gerald Wallace, who had been keying the comeback.  No matter, as DJ and Raymond kept the run going.  Raymond hit a tough jumper to cut the lead to seven with under three minutes left, and the crowd was on its feet from then on.  Then with just 30 seconds left, Raymond hit a driving, scoop layup to cut the lead to one.  On the next possession, though, Sheed got an open look at the top and drained a three to put this one away.  Sheed rightfully walked back to his bench giving the “SHHHHHHH” motion to the crowd he had just silenced, and that was that.

4) In his Bobcats debut, Boris Diaw went for 27 minutes, 7 points on 3-10 FGs, 9 rebounds (4 offensive), and 5 assists.  He misfired on a number of jumpers, but otherwise looked strangely aggressive and motivated – something I haven’t seen much from him in years.  The assists were nice – he had a particularly nice feed to Okafor for a dunk.

Though Diaw looks as puffy and untoned as Sean May, he is clearly much quicker.  He is already an upgrade over the struggling and hurting May; and if he can keep rebounding like he did last night and get in sync with the team over the next couple of weeks we might have a decent solution to our PF problem.

5) Speaking of May, he was inactive and looks to be back in injury/doghouse purgatory.  He has tendonitis in one of the knees and has been a bit gimpy this week.  It’s been said that the tendonitis is not necessarily related to the ongoing rehab from his microfracture surgery, but I find that hard to believe.  It’s at least indirectly related to the fact that, from a holistic sense, the dude’s got bad knees, and his bulky body type and inability to modify that will keep his knees bad.  His already borderline NBA-level of athleticism is going to continue to decline on bad knees, so I fear that he could just be on a downward spiral.

With Diaw and Juwan Howard joining the team, Hollins playing well in limited minutes, and Brown looking committed to giving Ajinca minutes, you have to wonder if May might have a lot of DNP-CDs in his future.

6) Raja Bell logged 26 minutes; his jumper was as off the mark as Diaw’s was.  He ended up with just 4 points on 2-9 shooting.  Like Diaw, he also seemed to be a bit overly aggressive and nervously energetic in his Bobcats debut.  Let’s watch as he settles down in the upcoming weeks and settles into his role.

7) Some terrible news this morning, as Bobcats beat writer Rick Bonnell reports that Gerald Wallace’s father has passed away in Alabama.  As noted above, Wallace missed the road trip this week to be with his family in the wake of his grandmother’s death, and now this…

Wallace looked rusty early on this game, but eventually got his rhythm back and finished with a great line: 22 points (7-14 FG, 8-9 FTs), 9 rebounds, 3 steals, 3 blocks and 1 block.  Despite the line and the big role in the late comeback, his body language was a bit off most of the night.  I initially attributed this to the trade, the ongoing trade rumors, and the death of his grandmother.

Now we have to wonder if he also had his father’s health weighing on his mind.

Gerald will likely miss another game or two next week; our thoughts are with him during this difficult time.

8. Two back-to-backs for the Bobcats this week, all four games have to be considered winnable: Monday night at the Hawks, Tuesday night hosting Chicago.  Then a small break, followed by Friday night at Memphis and Saturday night at home versus the Warriors.