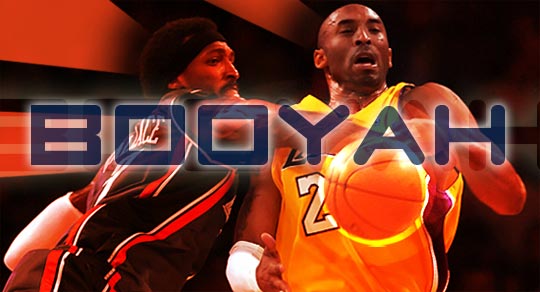 Coming off a tough loss in a very physical game, the Bobcats could have walked into the Staples Center exhausted from being pushed around by the Jazz in their last game. Instead, they showed focus and established a momentum that they hadn’t shown much of this season. Their balance of energetic defense and skilled offense was on display for about 40 minutes longer than the Bobcats have shown in any game this season.

Jason Richardson was clearly the engine that propelled the offense. His 34 pts and 10 rebounds were huge for the team and he showed real tenacity on defense with 2 blocks. While Richardson’s contributions were integral to the victory, Gerald Wallace’s coverage of Kobe Bryant may have been just as important for the ‘Cats. While his offense was efficient, his defense was remarkable. Bryant was contained as much as anyone could hold him and the consistent pressure pushed Kobe over the edge. The Bobcats never moved to their zone defense, trusting Wallace to hold Bryant. Only when rookie, Jared Dudley was forced to handle the superstar, did the plan stumble.

Offensively, the Bobcats made an impact in the paint. It was clear that getting the ball in Okafor’s hands was a priority. Emeka wasn’t explosive, but he certainly didn’t disappoint. As unimpressive as his hands have been this season, he passed extremely well. The Bobcats ran an inside-out game for much of a run in the second quarter where they established control of the game. With Jason Richardson hitting from the outside and finishing like a real baller inside, the team was able to swing the ball around the perimeter to exhaust the Lakers defense.

Though the balanced attack was impressive, the Bobcats performed their best as a team because they showed maturity. Essentially, Los Angeles tried to intimidate them. As the Lakers were beaten on both sides of the ball, they tried to frustrate and instigate sloppy play from the ‘Cats by getting physical. Derek Fisher even tried to stare down a ref. Still, it back-fired as Kobe and his teammates lost focus.

The TV recaps summarized the game as “Kobe Bryant’s ejection lost the game for the Lakers.” It would be a disservice to the ‘Cats to focus too much on Bryant’s tantrum. The Bobcats actually outplayed the Lakers for the entirety of the game. Sadly, the most told story about the upset will be about Bryant losing his temper. With effort to summarize the issue, it should be simply stated. Kobe Bryant’s play in the fourth quarter showed his lack of respect for the game of basketball. The NBA truly suffers if the best player in the league has no respect for the game.

If you love to hate Kobe, if you love to root for the underdog – or if you’re just sick of the Lakers you would have loved this game. LA was just outplayed. They tried to bully the young ‘Cats roster, but it was wasted effort. In a rare opportunity, the fans got to see the Bobcats play with poise and maturity.

3 thoughts on “BOBCATS BREAK THE LAKERS!”