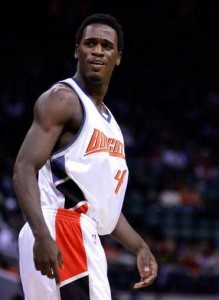 2) KAREEM RUSH
What a waste. This was Bernie’s big gamble and it never panned out. Rush showed signs of scoring ability, but never showed any desire to really play basketball. It looks like he might back up his younger brother on Indiana’s roster next season. Also, the Bobcats had to cut Eddie House when they picked up Kareem Rush. You know, Eddie House – the reserve sharpshooter for the NBA Champion Boston Celtics.

3) MELVIN ELY
Every Playstation and Xbox basketball game made this guy out to be a beast. He had a few post moves, but had his name mentioned more in trade rumors than in game highlights. Although he landed with the Spurs and stepped on the court for them 6 times, he’s got a championship ring. Take that Jason Kidd (and Karl Malone).

4) BERNARD ROBINSON
This guy was just ridiculously ripped. Not that it helped his game, though. He played basketball, but not the way basketball players usually do. You may recall that he was traded to the Nets for Jeff McInnis (ouch). What hurts worse is that he injured his knee and was unable to play last season. His contract was traded to the Hornets and was immediately waived in 2007. As he recovers, there’s a chance you might see him back on the court in the next couple of seasons. He showed a stronger ability for defense than offense. His dribbling skills were up there with Primoz.

5) OTHELLA HARRINGTON
God awful. Harrington was known for his ability to put up a shot when most would pass. Although he attempted plenty of field goals, very few were successful. His consistent injured body and large contract helped the Bobcats miss the playoffs for two consecutive seasons. Luckily, the contract expired this off-season and he was not asked to return to the club. Most don’t know that Othella would often hear chants of “MVP! MVP!” in his head whenever he touched the ball on offense. This caused him to immediately attempt a shot without his feet ever leaving the ground.

6) JEFF MCINNIS
Charlotte hated this Charlotte native. Maybe it was the lack of excitement in the arena last season, but the groans were audible anytime this McInnis took a shot. It felt like a miracle any time the ball actually made it through the rim. Raymond’s development as a point guard was disrupted and delayed by Jeff’s existence on the roster. Sam Vincent loved this guy. Enough said.