I found this great create-a-caption photo of Sean May celebrating Thanksgiving and it got me thinking; what did Fatty McGee dominate at the dinner table yesterday?

Whatever the main dishes were in the May household for Thanksgiving 2008, I’m sure they were not served in dainty portions. Can you image the mound of mashed potatoes Sean spoons out? I can just see him finishing his sixth platter of “roasted turkey, oyster stew, cranberry sauce, stuffing, creamed asparagus tips, snowflake potatoes, baked carrots, hot rolls, fruit salad, mince meat pie, fruit cake, apples, and corn; then leaning back in his chair, unbuckling his belt and giving thanks that he doesn’t have to play against the Pacers tonight. 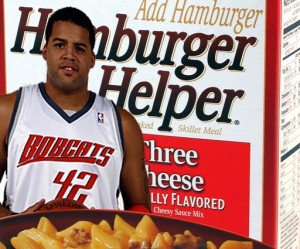 Maybe the Baseline is being a bit too harsh on Sean by calling him names like “The Hamburglar” and “Hungry Hungry Hippo“. Maybe he’s drinking Slim-Fast and eating celery. Maybe he’s turning down endorsement offers from Hamburger Helper and opting to pursue Luna Bars and Lean Cuisine. Maybe, instead of Thanksgiving dinner, he ran the stairs at the Cable Box. Maybe he gives a shit about his career.

3 thoughts on “What did Sean May eat for Thanksgiving?”