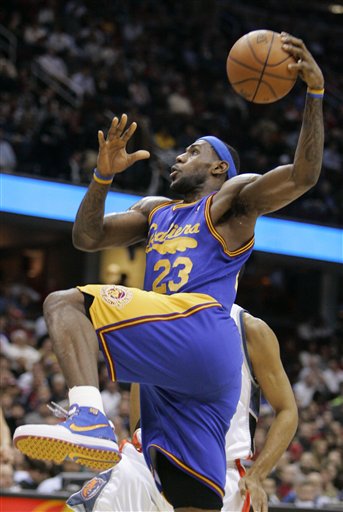 Not much to observe tonight, folks — so I’ll forego the usual format and hit the sack early.  One night after a thrilling (and apparently draining) win at home against the World Champs, the Cats get crushed on the road in Cleveland tonight 111-81. AP story here, box score here.  Cats fall to 13-23; Cavs improve to 28-6, 18-0 at home.

Lebron jumped all over Gerald Wallace in the first quarter, scoring 15 points on 7-10 FG en route to a 29-12 Cavs lead after 12 minutes.  It was over after that.  Cue Larry Brown: “The first play of the game, the game was over in my mind. LeBron just dribbled in and laid it up like nobody was guarding him… We never competed a lick.”

And that’s that.  No one played worth a damn for the Bobcats.  The mix of being drained from last night’s win, the late flight into Cleveland, and the presence of the most dominant basketball player on the planet was enough to turn the Cats into an embarrassingly limp bunch.

The Cats stay on the road for the next few games, but have a day off before taking on Philly Friday night.  Rest up guys.