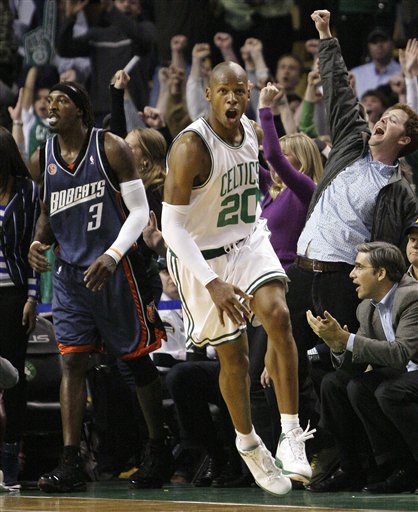 2.  Going to try to keep this short tonight as I’m a bit under the weather.  The bottom line is that the Bobcats, as they’ve done numerous times in the past, played the Celtics very tough tonight.  So tough, in fact, that they led 85-73 with 8:48 left in the fourth.  Eddie House caught fire and brought the Cs back, but the Bobcats still led 93-85 with just over two minutes left.

However, the Cats would go completely cold while the Cs turned it up a notch, scoring 8 straight to pull into a tie with a chance to win at the end of regulation.  Fortunately, Rondo missed a runner at the buzzer to allow the Cats another chance in overtime.

3.  In the first overtime, the Bobcats (after a half dozen chances) scored with 20 seconds left to go up by three.  But Ray Allen got a wide open look for a three at the elbow and drained it to tie the game up.

Raja Bell got a decent look at a potentially game-winning jumper at the buzzer, but missed.

4.  In double-OT, the Cats had the lead (109-108) and the ball with under 20 seconds left.  However, Felton couldn’t manage a better shot than a wild, tightly contested, jumper/floater while falling away from the basket from 13 feet.  Needless to say, he didn’t make it.

The Cs took the ball the other way with 10 seconds left.  The ball ended up in Paul Pierce’s hands on the elbow, with Diaw guarding.  The Cats had a fould to give, but didn’t use it.  Pierce easily blew by Diaw, forcing Wallace to close the gap.  Problem was, Wallace had been guarding Ray Allen in the corner.  Pierce found Mr. Shuttlesworth, who drained the three for a 111-109 lead.

The Cats called timeout to set up a final shot with two seconds left.  Larry Brown called a winner, as Raja Bell got a great look at a three-pointer from the elbow.  However, it was just a bit strong, and bounced harmlessly off back rim.

5.  Not that I’m counting, but here’s Raymond Felton’s shooting from the last 12 minutes of the game (2 minutes of regulation, plus both overtimes): 2-7 with 2 missed layups for four points.  I’ve said this before, but I guarantee you that every team’s advance scouting report on Raymond Felton has a line like this somewhere in it: “Let him shoot, let him try to beat you, especially in end-of-game situations.”

Yet Larry Brown was insistent on calling a 1-4 flat play for Felton at least three different times in the last 12 minutes.  This is the play (also known to old Larry Johnson/Charlotte Hornet fans as “Dallas”) whereby the “1” holds the ball in the frontcourt with the “4” teammates evenly spaced flat along the baseline.  The idea is that the “1”, given all that space, can break his man down and get a good look, get fouled, or maybe even get to the basket and force help for an easy assist.  Felton didn’t get any of these any of the three times I remember the play being run.  It was painful to watch.

(And if you want some statistical support for the Bobcats’ overreliance on an inefficent option in cruchtime situations, check this TrueHoop post from a couple of days ago).

6.  Gotta call out Diaw as well.  Over the last 14 minutes of the game, here’s his line: 2-5 FG for 4 points, 2 rebounds, 2 assists, and 4 turnovers.  Four turnovers in crunch time from one player, who is supposedly a maestro with the ball.  His bad passes drive me nuts.  The local media treat him like some kind of passing savant, excusing the turnovers by claiming that his teammates “are still learning” how to play with him, but that doesn’t jive anymore.  Maybe he needs to learn how to play with his teammates — or just how to stop imagnining passing lanes that aren’t really there.

Pretty much need six of them to have a shot.