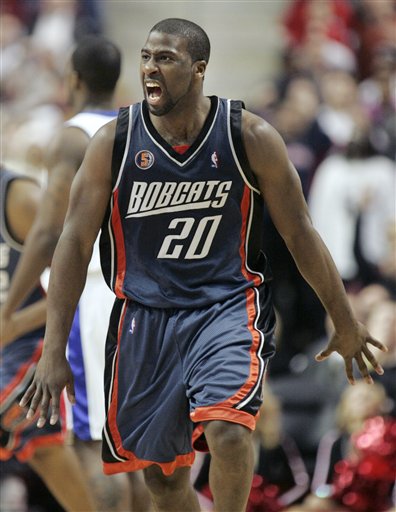 2. With nine minutes left in the fourth quarter, Rasheed Wallace hit a three pointer to put the Pistons up 74-67.  At that point, I began to mentally prepare myself to write my standard “Bobcats hang tough, but blow it down the stretch” postgame missive.  But alas, the Pistons would not hit another field goal for the rest of the game and the Bobcats do just enough on offense to pull out a win.

3.  Gimpy ankle, trade rumors and all, Raymond Felton came up huge and easily gets player-of-the-night honors tonight.  While the Pistons were ice cold and self-destructing down those crucial last 9 minutes, Raymond hit 4-4 FG (one of them a three) for 9 points, grabbed 2 big defensive rebounds, and had an assist to Raja Bell for another big bucket.

Raymond ended the game with 23 points (9-15 FG, 2-3 3PT, 3-3 FT), 6 rebounds and 9 assists vs. 1 turnover.   Watching Raymond play like this, and being reminded of what a good teammate he is (playing on the bad ankle, answering questions about DJ and the trade talk with total class) makes it harder and harder to accept that he’s going to be traded any day now.

We clearly aren’t going to re-sign him in the offseason, and thus have to get something for him now, so maybe his especially strong recent play will drive up the price we can charge.

4.  While Raymond single-handedly took care of things on the offensive end during the crucial finishing stretch, the Bobcats played great defense as a team on the other end.  With the starting lineup of Felton, Bell, Wallace, Diaw and Okafor on the court, the Pistons looked way out of sync.  The Bobcats forced a shot-clock violation with 6:15 left to set the tone.  The jump shots that Rodney Stuckey, Tayshaun Prince and Allen Iverson had been hitting earlier in the game completely stopped falling.  And the clincher was Emeka’s strong defense against Rasheed, who was induced into his sixth foul with under a minute left while trying to get post position on a huge possession.

5.  Come to think of it, the Bobcats (with the Pistons’ old coach, Larry Brown) really out Piston-ed the Pistons tonight.  The Bobcats kept the tempo to their liking, played great defense, never let any of the opponent’s stars beat them, rebounded well, and played smart, mistake-free, precision offense.

6.  Nice comeback game for Gerald Wallace.  After not taking a shot and getting benched for the fourth quarter of the last game against Washington, Wallace was aggressive on the boards and on offense from the get-go tonight.  With the Pistons back at full strength and starting a three-guard lineup, Crash got to go one on one against Rip Hamilton quite a bit, and ate him up at every opportunity.  The Bobcats wisely found Crash posting Rip up several times for easy buckets; Wallace ended the game with 18 points (6-14 FG, 6-6 FT) and 10 rebounds.

7.  So this win makes the Cats 8-8 since the big J-Rich trade, with four of those wins coming on the road.  Yes, two of the wins are against the Wizards and one is against the Grizzlies, but it’s still an encouraging stretch that shows what Larry Brown can do with some time and a few high-basketball-IQ guys.

Unfortunately, I’m not that encouraged.  Why?  Because the guy who has been leading the way during this 8-8 stretch (apologies to Boris Diaw) has really been Raymond Felton.  The same guy who might as well keep his bags packed because he’s going to get traded any day now.

8.  So the Pistons are kind of a mess right now, huh?  With Rip Hamilton, Allen Iverson and Rodney Stuckey, they have three 2 guards — none of whom are big/strong enough to slide up to the 3 and none of whom are particularly adept at running the point.  Stuckey is ostensibly the point guard, but let’s just say that he’s not making anybody in Detroit forget Chauncey Billups.  I mean, he’s a great combo guard already, but he’s got a ways to go when it comes to running a team at the point.

Obviously, they have plenty of veteran talent to make it to the playoffs this year, but I can’t imagine them making any noise once they get there.  In the big picture, they need to rebuild around Stuckey (as a 2 guard) and Tayshaun, right?  Amare Stoudemire might be a nice fit with those two…

9.  Next game should be a fun one.  The Portland Trailblazers come to town Saturday night, 7:00 start.  I like how the Blazers have gone from internet darlings to challenging the Celtics for the “most hated team in the league” in just a half season.  Trying to force a player to retire so you can get some cap space, then threatening all the other teams in the league via email who might want to sign him will do that…