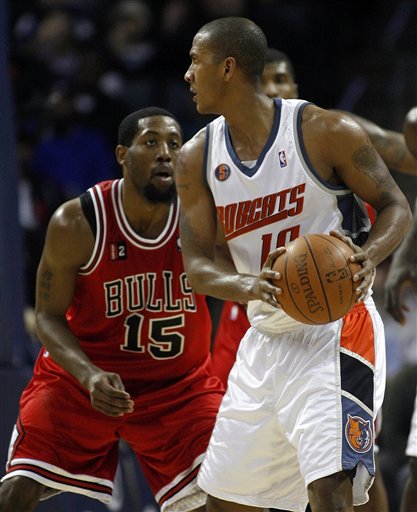 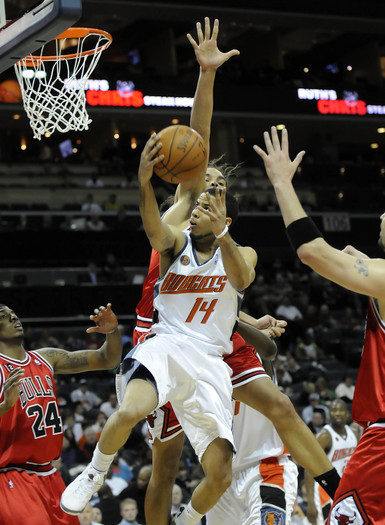 1.  Keep those playoff dreams alive, Bobcats fans.  The Cats post a solid win over the visiting Bulls at the Cable Box on Wednesday night, 96-80.  AP story here, box score here.  The Cats have a season-high four game win streak going (woo-hoo!) and are within two games of the 8th playoff spot.

2.  That was a shockingly lame effort from the Bulls, who are right in the mix with the Bobcats fighting for the last playoff spot.  The Bobcats came right out and jumped on them with a stellar first quarter; the Bulls only made a half-hearted push late in the third, cutting the Bobcats lead to 8 at one point, but coudn’t get any closer.

I realize the Bulls were without key reserve Tim Thomas and ostensible star Luol Deng, but still.  It’s not as if Deng is Lebron James or something.  I really liked the Bulls’ move to get John Salmons and Brad Miller at the trade deadline and figured it made them the front-runners to claim the 8th playoff spot, but neither was very impressive tonight.  Salmons was downright bad, in fact (1-7 3PT).

3.  The Bobcats were very Pistons-like tonight in that the starting five all got into double figures, yet no one scored over 18.  Raja Bell, who was a question mark going into the game with a busted up shoulder, came out on fire, hitting 7 of his first 9 shots (including 2-2 3PT) and netting all 18 of his points in the first half.  Boris Diaw proved to be a nice counterbalance in getting all 13 of his points after the half.

Emeka was solid with 14 points (5-9 FG, 4-4 FT), 10 rebounds and 2 blocks — could have used a few more looks inside against the Bulls weak front line, but whatever.

4.  The bench was equally well-rounded.  DJ didn’t torch Derrick Rose like he did in their first matchup this year, but still had a nice game with 8 points (3-4 FG, 2-2 FT) and 5 assists vs. 2 turnovers.

And Gana Diop had probably his best game of the year, with 6 points (3-4 FG), 5 rebounds, 2 steals and 1 block in 13 minutes.  The line isn’t that impressive, and it’s hard to see it even in the play-by-play, but for five minutes in the fourth quarter, Gana dominated the paint.  During that stretch (from 9 minutes left until 4) the Bobcats extended their lead slightly from 15 to 17 despite the Bulls making a last-ditch desperation effort to make it interesting.

5.  And the icing on the cake was the tussle between the Bulls lumbering backup center, Aaron (Lurch?) Gray and The Human Victory Cigarette, Alexis Ajinca.  Alexis entered the game with three minutes left and immediately went to work, missing a 20 footer, then a 12 foot Magic Johnson rolling-across-the-lane skyhook.  On the other end, he fouled Gray down low.  I don’t recall the foul being overzealous or anything, but maybe it was.  It might explain what happened on the next possession.

Alexis gets the ball in the post, guarded by Gray.  Now keep in mind, Gray probably outweighs Ajinca by at least 60 lbs and there’s under a minute left in a 15-point game.  Alexis tries to make a move, but gets nowhere against his massive opponent; so he starts dribbling all crazy-like, except he’s going backwards, into the corner.  Gray, like a shark sensing blood, advances further, making sure to body up on the Frail Frenchman.  Ajinca bristles at the rough play.  A foul is called on Gray as Ajinca is forced out of bounds.  I’m not sure if words were exchanged, or just mean-mugging and the universal body language of “WTF, asshole?!?!” but next came a strong one-handed shove from Gray, which sent Ajinca flying backwards, surprisingly not very far.  Freedom Fries quickly regained his balance, and…

whipped the ball at Gray’s torso.  At this point, both Ajinca and Gray were showing more emotion than any of their teammates had during the entire, ho-hum game.  No one else wanted to join in though; whistles were blown and teammates quickly separated the spirited twelfth men, who garnered matching, offsetting technicals.

But just because no one else wanted to join in doesn’t mean the fracas wasn’t enjoyed by all.  Several players, Kirk Hinrich and Raymond Felton in particular, shared broad grins in the aftermath at the prospect of an Aaron Gray-Alexis Ajinca rumble.  Rufus ran onto the court (just a few steps, at the opposite end of the floor, but still… suspension? — jk) to shadowbox and agitate.  Most of the fans had a hearty chuckle.  Good times.

6.  A quick glance at the box score shows a favorable assist:turnover ratio for the game: 24:13.  Let’s hope it stays that way.  And free throw shooting was on point tonight 18-20.

7.  So with this win over the Bulls, the Bobcats clinch the tiebreaker on them, should they end up tied for the 8th spot in a few weeks.  And with New Jersey’s clutch win over Milwaukee, things have really tightened up overall.  Milwaukee still holds the 8th spot.  New Jersey’s only a half game back; the Bulls are 1 game back; the Bobcats and Pacers are both just 2 games back.

8.  The Cats get a couple of nights off; next game is Friday night at home against the Hawks at 7 PM ET.