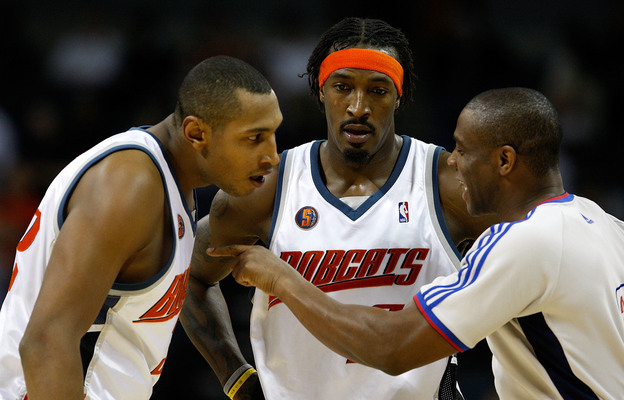 2.  This one bore some superficial similarity to the Bobcats win over the Grizzlies in Memphis a few weeks ago, in that the Bobcats cruised to a relatively easy victory against a listless, overmatched Memphis squad both times. It’s really nice to see the Cats continue to take care of business against the handful of teams in the league that they’re actually better than.

3.  After some nice crowds recently, attendance was pretty down tonight — and for the first three quarters, the fans that were there didn’t have much reason to get excited.  This game was not played at a high level from an energy or execution standpoint.  The two teams combined for forty turnovers and generally looked like they had agreed to a secret pact before the game to play at half speed.

All that said, the Bobcats were clearly the better team, and were able to pull away in the fourth quarter by tightening up their defense and getting some easy buckets of offense.

4.  Through those first three slow-played quarters, Raja Bell was the only Bobcat who could get anything going.  He hit mid-range jumper after mid-range jumper to pace the Cats with 25 points.  And in another similarity to the fist time these two teams played, Bell hounded OJ Mayo into a distinctly below-average game.

6.  And that’s about it for the Cats tonight.  The bench was pretty awful — just look at the +/- numbers on the boxscore.  DeSagana Diop made his debut for the Cats, playing three quiet, forgettable minutes after receiving a nice hand from the crowd.  Adam Morrison played 13 brutal minutes, shooting 1-3 and grabbing five rebounds, but committing three turnovers (two on travelling violations) and two fouls.  He’s passing up decent shots and basically looking skittish out there.

I hate to have to say this about a rookie (he shouldn’t have this much pressure on him) but the team is really missing Augustin’s scoring and leadership off the bench.  With Carroll gone, Morrison a mess, and Augustin likely to move into the starting linuep if/when Felton is traded, I shudder to think about our backcourt depth down the stretch.  Here’s your opportunity, Shannon Brown.

7.  Re: the Grizzlies?  Now granted, I have a biased sample to go on (2 losses to the Bobcats) but this team plays with no heart whatsoever.  Rudy Gay is very talented, but the knock on him coming out of college (doesn’t have the temperment/personality to lead) is proving to be true.  He disappears from games far too easily.  OJ Mayo works hard and is very fundamentally sound, but has looked very pedestrian in the two Bobcats games.  And they’re a mess at point guard — Mike Conley looks OK, but had a frightening -23 +/- tonight.

8.  Man, watching Darius Miles in person made me hate the Trailblazers even more for what they tried to do to him.  He’s clearly still an NBA player, and for a guy who’s still working his way back into game shape, looks pretty springy out there.  I’m just impressed that he’s been able to keep his mouth shut about the raw deal the Blazers tried to give him — I’d be spewing all sorts of vitriol their way if I were him.  Congratulations, Trailblazers: you did the impossible and turned Darius Miles into a sympathetic figure!

9.  Next game should be a good one — Friday night at the Cable Box against Phoenix.  Though they’re no longer playing D’Antoni’s Seven Seconds or Less style, the Suns are still a marquee team with Nash, Stoudemire and Shaq.  And there’s the added significance that, since the big J-Rich for Diaw & Bell trade, both teams are playing their best ball of the season.