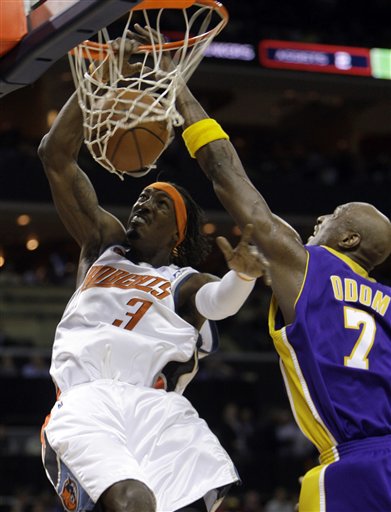 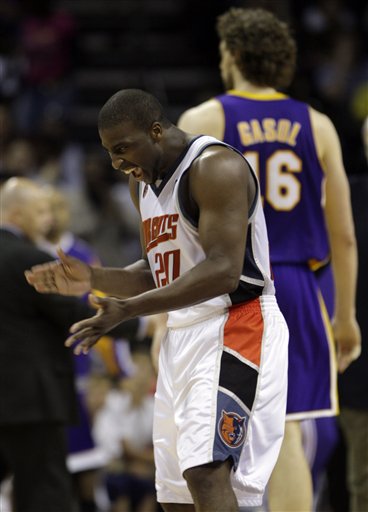 1.  The Bobcats score a huge win at the Cable Box Tuesday night, defeating the Los Angeles Lakers 94-84.  AP story here, box score here.  The Bobcats continue their uncanny mastery over the Lakers; they’ve now swept the season series and have won 6 of the last 7 matchups.

Perhaps more importantly, the Cats won a game that most of us had marked off as a likely loss on the same night that the Bulls and Pistons both lost.  The Cats are one game back from the 8th place Bulls and two games back from the 7th place Pistons with 8 games left in the regular season.

2.  The game was sold out; the atmosphere was awesome.  There were thousands of Lakers/Kobe fans in the building; they were treated to a superb effort by the Cats and a subpar one from the Lakers.  The game was tight throughout: in the first quarter the Cats briefly held an 8 point lead; in the second quarter the Lakers briefly went up by 6.  At the half the Lakers led 44-43 in a low-scoring affair.

3.  The second half began in a similar manner.  But with a couple minutes left, It was time for Phil Jackson to give his starters some rest.  Luke Walton got Odom, Josh Powell got Ariza, Jordan Farmar got Fisher, and finally, Sasha Vujacic got Kobe.  Then the wheels came off for the Lakers.

From two minutes left in the third until Kobe re-entered with 9 minutes left in he fourth, the Bobcats outscored the Lakers 14-3 to build a 75-66 lead.  They did it by turning up the defensive intensity, suffocating the Lakers’ reserves and capitalizing on all the turnovers they forced.  The Lakers “Bench Mob” looked pretty inept.

4.  Once Kobe returned, the Lakers looked poised to make a run at it, but the Bobcats were up to the task.  Kobe cut the lead to two with five minutes left, but the Cats got a layup from Boris, a three from Raja, and a reverse layup by Gerald on their next three possessions to stretch the lead back out.  From there, the Cats simply hit their free throws for the final margin.

5.  The overall story of the game probably has to be the ease with which the Bobcats were able to score.  On the game, they shot 51.5% (compared to 39.2% for the Lakers) and were able to get layups and good looks all night.  At least against the Bobcats tonight, the Lakers seemed to be missing Andrew Bynum’s defensive presence.

6.  Kobe was off from the get-go tonight.  He appeared to be favoring his recently sprained right ankle by swinging his right leg out excessively and landing only on his left foot after jump shots.  There was a two-minute stretch in the third quarter when Kobe had 8 points in a 10-4 run when it seemed as if we’d get to see a vintage Kobe scoring binge.  But the Bobcats called timeout and sucessfully cooled him off.  He ended the game with 25 points on 11-28 FG.

7.  For the Cats, Gerald Wallace was easily the player of the game.  He came out so jacked up in the first quarter I feared he wouldn’t have anything left for the other three.  No worries, though.  After setting the tone early, he maintained it throughout.  Wallace finished with 21 points (10-16 FG, 1-2 FT), 13 rebounds, 4 assists and 5 blocks.

8.  One funny note: every game, the Bobcats have a “Team Store Item of the Night.”  It’s often a pretty good deal on a less-than-bestselling product.  For example, Sean May Swingman jerseys (regular $80) have been $20 or $25 a couple of times.  Tonight, though, the “Team Store Item of the Night” was “all authentic jerseys (regular $180) for $40.”  Not bad, I thought, as I envisioned getting either a Gerald or DJ alternate authentic for 40 bones.

Now I haven’t been in the team store since very early in the season (Lord knows I don’t need any more Bobcats junk).  So I was surprised to that the place was very sparsely stocked.  It looked like a bankrupt chain store that’s three weeks into its liquidation sale (40% off lowest marked price!).  It would seem that they haven’t re-ordered/restocked much of anything.  And that would go for the $40 authentic jerseys, too.

What they had was on two racks.  No blue alternates at all, no Gerald Wallace, no DJ Augustin, no Boris Diaw.  They had a few with no number or name (what the hell would anyone want with that — am I supposed to fashion and sew on my own number and nameplate?).  Then the big laugh: they had a whole rack of authentic home Gana Diop jerseys.  Seriously…

9.  Next game is a tough one.  The Cats presumably hopped on a plane to Boston after the game tonight as we’ve got a back-to-back in Boston.  Little bit of good news: Garnett is out.