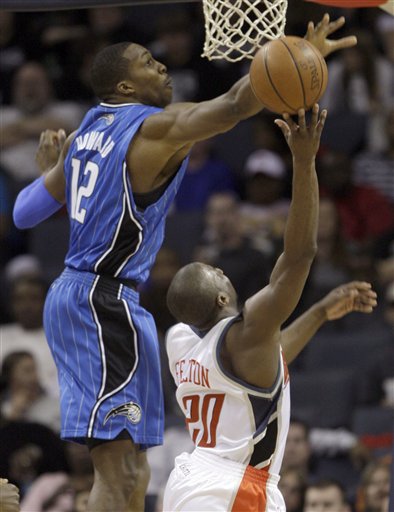 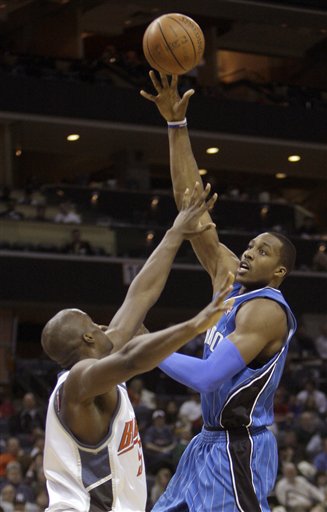 1.  Bobcats get blown out at the Cable Box by the Magic on Friday night, 92-80.  AP story here, box score here, PopcornMachine.net game flow here.  The Bobcats drop to 22-33; still just 3.5 games out of the 8th playoff spot, but also still with 5 teams to leapfrog to get there.

2.  The team apparently announced a sellout for this Friday night tilt against Dwight Howard and the Magic, but the arena was probably 2/3 full (OK, maybe 3/4, I didn’t look too hard).  Still an impressive crowd to come out and watch a lottery team in the midst of this recession.

Unfortunately, the home team didn’t give the fans much of a reason to get excited  The Cats were dominated in pretty much every aspect of the game by the superior Magic, and were lucky to claw away at the lead a bit late, making the final score somewhat respectable.

3.  Per Bonnell, Larry Brown called out Raymond Felton and DJ Augustin during his postgame comments for taking too many shots at the expense of facilitating the offense (only 8 assists between them).  But let me offer a dissenting opinion (I am a blogger, after all): there was no offense to facilitate.  Seriously, no one else had it going, so naturally, the guys who have the ball in their hands the most are going to eventually take most of the shots.

Check the game flow or the play-by-play: of Raymond’s 18 shots, only 7 were taken before halftime (and 4 were made).  After the half, when it was pretty clear that the Magic were winning this one and the Bobcats weren’t going to be able to offer much resistance, Raymond jacked up 11 more shots (only making two).

I’m not trying to completely dispute Brown’s point.  He’s right; it is the PG’s job to facilitate the offense, and if the team can’t get it going, it’s often primarily due to the PG’s inability to facilitate.  (And Raymond is a terrible shooter who shouldn’t be pulling up for 20 footers off of high screens or taking threes more than once or twice a game.)  But against the Magic on Friday night no one else emerged as a viable endpoint to such facilitation.

4.  Without belaboring the point, let’s take a look at some of the other lackluster performances:

Gerald Wallace logged 42 minutes, but scored only 11 points (3-8 FG) and 6 rebounds.  He was very frustrated guarding and being guarded by the Magic’s big forwards (Turkoglu and Lewis); and on the occasion he could get around them, he was met by Howard inside.  (Howard tallied 6 blocks, and significantly affected at least a dozen others.)

In the second half, Wallace aimed all of his frustrated energy not at the Magic, but at the officials.  He took to flailing around, trying to draw fouls every time he fought through a screen and scowling at the refs.  On a couple of occasions, he was lucky to not draw a tech.  Surprisingly, these antics roughly coincided with the Bobcats chipping away at the lead late; but it was too little, too late.  And all the energy directed at the refs would have been better utilized directed towards the Magic in the first half.

Boris Diaw had another underwhelming game, scoring 15 points (5-14 FG) with 8 rebounds and only 2 assists (vs. 3 TOs).  After a strong first few weeks with the team, Diaw has seemingly settled into the kind of uninspired, lackadaisical play that resulted in him being tagged as “overpaid” in recent years.

5.  And I haven’t even mentioned the Bobcats’ defense yet.  The Cats, probably overly concerned with helping down low to prevent Howard from going off like he had on Tuesday night, did a poor job rotating on defense and identifying Turkoglu and Lewis on the perimeter.  When those guys (and the Magic’s other smalls) are playing well, defending the Magic is an exercise in picking your poison.

So the Magic worked their overall offensive gameplan very effectively and efficiently.  Turkoglu had 24 points on only 13 shots; Rashard Lewis had 18 on 5-9 3PT shooting.  Howard only needed to chip in with 13 points.

6.  Overall, the Magic proved that they are a superior team.  Check this quote by newly acquired PG Rafer Alston, who had 8 assists in his first game with the team:

“Everywhere I looked, I had a weapon to pass it to… I think point guards in this league would love to be in that situation.  Everywhere you turn, you’ve got a guy who can flat-out shoot it or can drive it and finish.”

7.  Speaking of Alston, great acquisition by the Magic.  I had advocated trading Felton to Orlando, hoping to get Mickael Pietrus or Courtney Lee back, but wondering if the Magic were desperate enough for PG help to do that.  Clearly they weren’t, as they were able to get Alston (who is a known commodity to Magic coach Stan Van Gundy from their year together in Miami) for a pittance: sending Brian Cook to the Rockets and the pu-pu platter of Adonal Foyle, Mike Wilks, their first round draft pick and some cash to the Grizzlies.

Alston will be a servicable starter for the Magic the rest of the season, and will be a capable backup next year at $5 million — and the only asset of consequence they gave up was this year’s draft pick.

8.  One last note: it’s fun to watch a young super-duper-star like Howard become comfortable in his role as such, while not losing sight of what the ultimate goal of playing in the NBA is.  What I mean is that Howard is comfortable putting on a show for a crowd that he knows came to watch him (as evidenced by the alley-oop exhibition in warmups, the good-natured running banter with courtside fans, and throwing his shoes into the crowd after the game); but clearly knows that the point is to win games and eventually, a championship.  He has improved his game every year, is a good teammate, and plays the game “the right way” in general.

If you’re still holding out hope for the 8th playoff spot, you’re wanting a 3-2 road trip, which is totally possible.