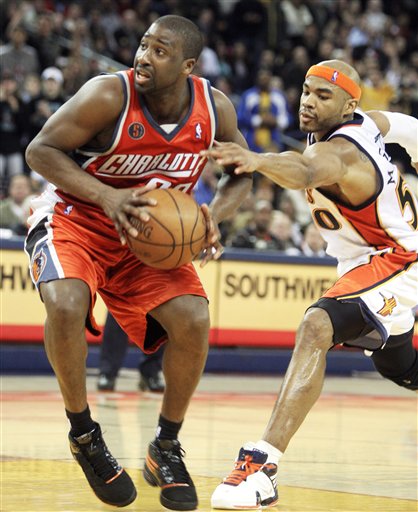 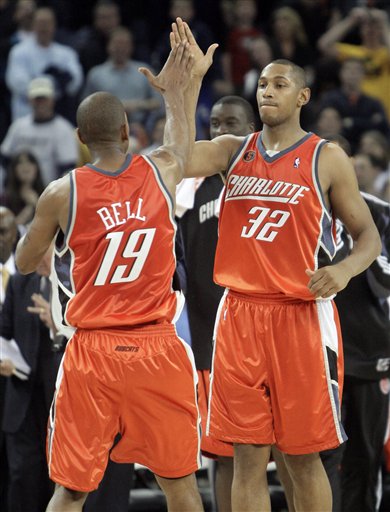 1.  The Bobcats win their second straight on the road Friday night, 112-109 over the Warriors.  AP story here, box score here, PopcornMachine.net game flow here.  The Bobcats go to 24-35 overall, netting only their eighth road win of the season.  The win does give them a chance, with a win tonight against the Clips, to go 3-2 on a week-long Western Conference road trip.

2.  Quickly: apologies for the lack of post on the Kings game, and the late, abbreviated nature of this post.  Suffice to say, there have been some technical issues here at the Baseline.  Mine, in particular, seem to be resolved.

3.  With Don Nelson in full-on tanking mode the mood to sit some veterans in order to give his young guys extra playing time, this looked from the outset to be a winnable game for the Cats.  Monta Ellis was already shut down in order to rest his stiff left ankle (yes, the one from the scooter accident), and has since left the team due to a family emergency in Mississippi.  Godspeed, Monta — just stay away from the scooters.

In addition to that, Nelson announced before the game that Jamal Crawford would sit, just to pave the way for CJ Watson, Marco Belinelli and Anthony Morrow to get some burn.  None of those guys took much advantage of the opportunity, leaving Stephen Jackson, Corey Maggette and Andris Biedrins to shoulder the load for the Warriors.

4.  Despite this, the full-strength Bobcats were lucky to pull this one out.  The game was pretty sloppy and not all that interesting until the closing minutes (or maybe it just seemed that was because it was after 1 AM and I was fighting to stay awake).

The Bobcats led for almost the entire first half, then trailed for much of the third quarter.  A 10-0 run in the waning minutes of the third set the stage for a tight finish.  With under a minute left and down one, Raymond Felton got three shots on one possession thanks to some good offensive rebounding.  He finally hit on his third attempt, a tough floater in the lane, putting the Cats up one.

Over the next couple of possessions, the Cats only managed one free throw from Emeka, while the Warriors got four points from Stephen Jackson, giving them a two point cushion with 20 seconds to play, Bobcats ball.  Felton heads down the lane off the high screen.  I tense up, ready for the inevitable overpenetration and blocked layup attempt, but Felton passes out to Bell in the corner.  The Warriors rotate quickly, forcing Bell to find Diaw out on the elbow with only a few tics left.  Boris loads up and drains the contested, game-winning three with two seconds remaining.

After a timeout to set up a potential game-winning shot, disaster struck for the Warriors.  Stephen Jackson inbounded the ball towards CJ Watson, who was flashing open.  As the pass was thrown, though, Watson adjusted his route slightly in the direction of the basket (anticipating the need to get his momentum in that direction).  The ball bounced harmlessly out of Watson’s reach and out of bounds.  All the Cats had to do was inbound the ball to Felton, who was fouled and hit his free throws to arrive at the final three point winning margin.

Felton wasn’t the only one with the turnover bug, though.  It’s been a problem team-wide on this road trip.  In particular, Okafor had 4 and Augustin had 3 (in just 14 minutes) against the Warriors.

6.  These two straight wins, coupled with losses by Chicago, Milwaukee and Indiana on Friday night, have moved the Bobcats to back within three games of the eighth playoff spot and reignited hopes that they might get there.  As David from Rufus on Fire has noted, it’s going to be a very difficult task for the Cats to get there.

It looks like we’ll need to go 16-7 the rest of the way just to have a shot.  13 of those games are on the road.  While it’s certainly possible that the Cats could play their best ball of the season down the stretch against a lot of teams who might not have the same motivation to be playing hard, it’s still improbable.

7.  And bad for the long term, as I’ve argued.  Getting to the eight spot gives us a first round matchup with either the Celtics or the Cavs.  No doubt, it would be huge to garner the exposure and local goodwill that comes with making the playoffs (and we might even be able to give the Celts a tough series, based on how we’ve matched up with them in the past), but we really don’t have a chance in either of those series.

And, as you’re probably tired of hearing me say, we’d lose our draft pick ot the Nuggets in order to complete the Alexis Ajinca trade.  The pick is totally lottery-protected this year (meaning that if we don’t make the playoffs, we keep the pick).  In future years, it has diminishing levels of protection.  But with the current level of talent on the roster, and the tight financial situation the Cats (and the rest of the league, to varying degrees) are in, it has never been more important to have the opportunity to get a talented, productive player on a reasonable rookie contract.