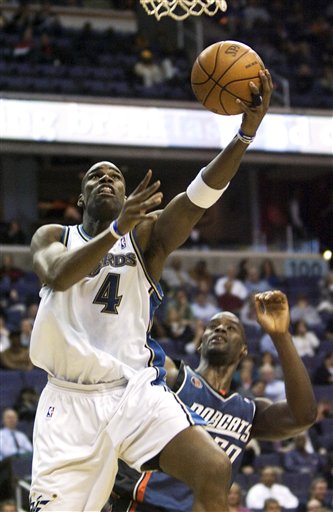 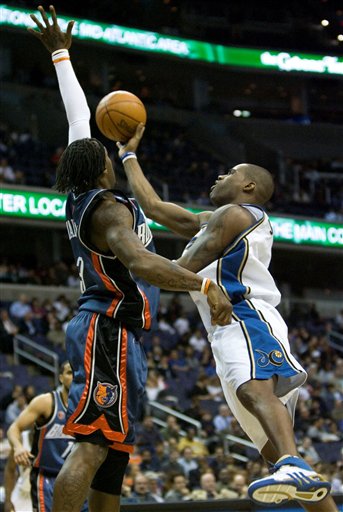 1.  The Bobcats virtually end their chances at making the playoffs with an embarrassing loss to the Washington Wizards, 95-93.  AP story here, box score here.  The Bobcats fall to 31-40 and are now 2.5 games behind Chicago for the 8th spot with 11 games left.

2.  The Wizards entered the game at 16-56 and 0-14 versus the rest of the Southeast Conference.  They only dressed 8 players: Mike James, Javaris Crittendon, Dominic McGuire, Antawn Jamison and Andray Blatche started, while Nick Young, Javale McGee and Oleksiy Pecherov were available off the bench.

With four minutes left in the second quarter, everything was going as planned.  The Bobcats had a 55-35 lead and looked to be in command of the game.  The ball was moving well and the Cats were getting layups, dunks and open jumpers.

But in the last four minutes of the half, against the second unit featuring DJ, Cartier, Vlade and Gana, the wheels fell off.  Mike James, Nick Young and Antawn Jamison caught fire for a 15-2 run that cut the Bobcats lead at halftime to 57-50.

3.  And if that wasn’t bad enough, the third quarter would again prove to be the undoing of the Bobcats.  They went away from the ball movement and failed to attack the basket, while the Wizards continued their hot shooting.  The Wizards ended up winning the quarter 23-14 for a 73-71 lead.

4.  The fourth quarter started off promisingly with two straight DJ three-pointers.  Bricked jump shots (5 in the quarter), turnovers (3), missed free throws (7!) — you name a bad play and the Bobcats displayed it in the fourth quarter.  With under four minutes left, the Wizards led 89-81.

At this point, the Bobcats hardly deserved another chance to win; but the lowly Wizards would provide it anyways.  With a little over a minute left, the Cats had cut the lead to 4 at 91-87.  Let’s just detail the suck from there:

— Wizards turnover; Augustin steals, Raymond gets fouled on the break but misses both free throws

— Another Wizards turnover; Raymond steals, gets it to DJ on the break, who misfires badly trying to get a lob to Wallace.  Bobcats turn it back over, still down four with a minute left.  (Should be tied right now.)

— Another Wizards turnover; Charlotte calls timeout.  Out of the timeout, Boris gets a mismatch and takes Nick Young into the lane.  Boris makes a tragically weak move, Young gets the clean block and corrals the loose ball.  Boris fouls in frustration, Young hits both of his free throws to extend the Wizards lead to 6 at 93-87 with 57 seconds left.  (Could/should be Bobcats up two at this point.)

— And yes, another Wizards turnover by Mike James (seriously, I’m not making this up — it’s like the Wizards were giving away “Get Out Of Jail Free” cards); DJ steals; Gerald takes his man one-on-one to the basket but blows the layup.  Still 93-91, 14 seconds left.

— Bobcats foul Jamison, who leaves the door open again by only hitting one of his free throws.  94-91 Wizards, 13 seconds left.  Bobcats call 20 second timeout to set up a play.

— No one gets a good look at a three, but unbelievably, McGuire lets Gerald Wallace get free underneath.  Raja finds Wallace, who hits the layup which McGuire foolishly contests.  A foul is called, giving Gerald a chance to tie the game by completing a three point play with six seconds left.

— Of course, Wallace misses the free throw — but wait!  Okafor gets the rebound, misses the putback in traffic (clock ticking down to 3…2… by now); that rebound goes cleanly to Diaw on the other side of the rim, who completely botches a wide open, uncontested tap-back, sending it off the backboard and completely over the rim.  Unbelieveable.  That was a shot that you perfected by playing “tap-out” by the time you were 11, and Boris didn’t even come close.  The Wizards finally showed a sliver of competence when Antawn Jamison wrestled that rebound down, drawing a foul in the process and hitting his first free throw for the final margin.

5.  By my count, that’s five Wizards turnovers, 1 missed free throw by Jamison, a blown coverage by McGuire compounded by fouling on the Wallace layup, and an inability to grab the game-clinching rebound off a free-throw miss — all in the last 90 seconds of a close game.

And the Bobcats, for whom this was a must-win if they wanted to stay within sniffing distance of a shot at the playoffs, couldn’t take advantage of this cornucopia of incompetence.  For this game, we were as equally incompetent as the cellar-dwelling Wizards.

6.  After the game, a couple of the media guys tried to nudge Larry Brown into negativity, asking if he was “embarrassed by losing to a team with 8 guys” or “frustrated with the missed free throws”.  LB played the wizened old supportive father, saying that no one was “trying to miss those free throws” and that the team had played hard.  But in reality, he has every right to light into his team.  There is no excuse for such poor focus and execution against one of the league’s worst teams during a playoff run.

7.  Prior to the last two games, the Bobcats really had a chance to simply outplay the Bulls down the stretch and steal the 8th playoff spot.  Remember, we have the tiebreaker on them.  But after blowing these last two winnable games it seems that it is going to take an exceptional finish by us combined with a major collapse by the Bulls.  I wouldn’t be surprised if Hollinger’s playoff odds for us are below 8% tomorrow — maybe even lower.

8.  Next up is an away-home back-to-back.  In Philly on Friday night, hosting the Knicks Saturday night.