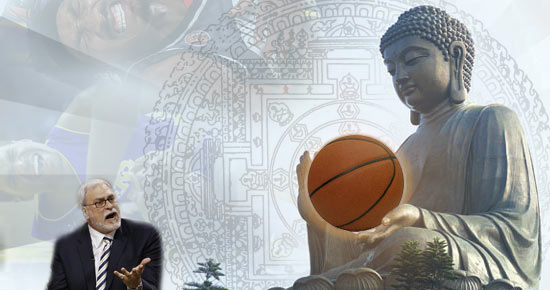 Karma is action, and Vipaka, fruit or result, is its reaction.  Within four days, quite a bit happened.

The Los Angeles Lakers’ Andrew Bynum just received word that his knee injury will keep him out for over two months.  Andrew Bynum was hugely responsible for sending Gerald Wallace to the hospital for the majority of last week, so it’s going to be tough to feel bad for the guy.  Bynum’s injury occurred when Kobe Bryant crashed into him after a driving miss against Memphis on Saturday night.  From the video, it appears that Bynum failed to react before Bryant came down into his leg.  He was simply in the wrong spot at the wrong time.  Was this some type of universal calibration of the basketball world back into balance?

As an NBA fan, it’s not good to see anyone get hurt.  So, let’s just hope Gerald Wallace returns to form and Bynum can bounce back by the end of the season, as well.

Phil Jackson should understand and accept the universe at work with his roster.  Perhaps, there are only so many championship rings one can carry with them along the journey of life.  It appeared during pre-game warmups that Bynum had worked out the hitch in his Ch’i and the injury was mostly due to the misalignment of Kobe Bryant’s chakras while going to the hoop.  Although, Jackson was unavailable for comment, His Holiness the 14th Dalai Lama responded via text message that “a quality Center is necessary to the two concurrent triangles that exist in LA’s version of the Triangle Offense.”* Gerald Wallace’s absence nearly eliminates the Bobcat’s hopes of a Playoff berth, but the Lakers will desperately need Bynum back if they want to contend for another NBA Title.

*Not at all factual