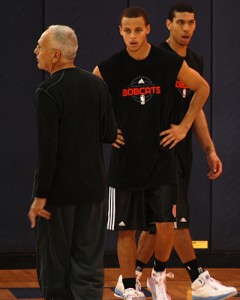 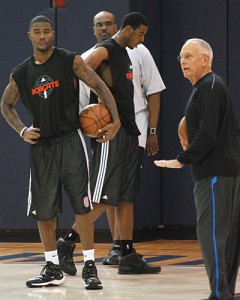 In Part 1, we established several team needs.  Most of all, the Charlotte Bobcats need a superstar — position be damned, we need an alpha-male, a go-to scorer, a box-office draw, a crunch-time killer, et cetera, et cetera.  Since that’s not going to happen at #12 (the best #12 pick this decade is probably Thaddeus Young), let’s just forget about it.

The team needs that we should realistically be looking at filling in this draft are at backup SG and backup PF.  Of the two, the backup SG spot is more pressing.  Raja Bell was pretty brittle down the stretch this year, and probably only has a year or two left as a legitimate starter in the league.  So the “backup” we’d be looking for needs to have some potential to become a starter within that time frame.  #12 seems like a good spot to find a guy fitting that description.

On the other hand, Larry Brown has recently opined that drafting for need isn’t the best draft strategy.  He seems to think that, even at pick #12, talent should rule the day.  I think we can all agree that talent should rule the day if you’re talking about a top 3 pick; but beyond that, the argument that you should pick with team needs in mind makes a lot more sense to me (and Greg Popovich and Jerry Sloan, apparently).

Fortunately, Chad Ford rendered this debate meaningless a few years back by revealing a draft strategy commonly used by successful GMs.  It’s called the tier system, and it basically allows you to combine both approaches in a rational manner.  Ford just posted this year’s edition of the tier column on Wednesday.

The “strategy” goes like this: you group the first round prospects in tiers, as opposed to trying to rank them in some exact order.  Within the tiers, you loosely rank the players according to your team needs.  When your pick comes around, if there’s a player from a higher tier available, you pick him, regardless of position — even if he doesn’t fit your roster well, he’s too good of an asset to pass up.  If all the players available are in the same tier, then you pick the player that matches your team’s needs the best:

Here are Ford’s tiers for this year:

Per Ford: “a number of GMs say this draft really goes 10 deep.”  So the chance that someone from Tier 3 falls to the Bobcats at #12 is infinitesimal.  Tyreke Evans or DeMar DeRozan would be ideal, but it’s just not going to happen.

A quick look at the list of guys that the Bobcats were able to get in for workouts validates Ford’s tiers.  Most of the guys in Tier 4 visited the Queen City.  The only guy from Tier 3 to grace Larry Brown with his presence was hometown boy Stephen Curry, who basically used us as a practice interview.

So we’re left with the mishmash of Tier 4.  Again, per Ford: “Theoretically, teams are saying you can get the same quality player at 11 that you will get at 24.”  Ouch.

Coming soon in Part 3 of the 2009 Draft Preview, I’ll sort through the guys in Tier 4 in detail.