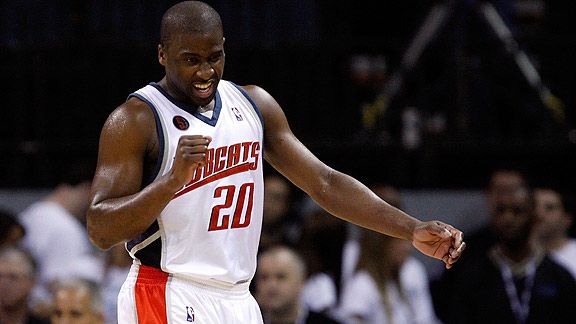 Sean Deveny of The Baseline at TheSportingNews.com (no relation to Bobcats Baseline) is reporting that Raymond Felton will sign the Bobcats’ 1-year Qualifying Offer of $5.5 million.  Bonnell had suggested in a Monday blog post that there was about a 60% chance this would happen.

What this means is that Felton and the Cats were unable to come to an agreement on a long-term deal. Deveny speculates that the Bobcats’ offer was in the neighborhood of 5 years/$37.5 million, but that seems a bit high.  Wouldn’t Felton have jumped all over 5 years/$37.5 million?

I’m guessing the Bobcats’ offer was less than that, which is a good thing.  They were bidding against themselves for a point guard who would start for less than a third of the teams in the league.  With several other bloated contracts weighing down the payroll, the salary cap shrinking and the team for sale, they had to be pretty stingy and apparently were.

This really works out well for everybody.  We get Felton on a reasonable, one year deal.  He’ll be playing his butt off for a long-term contract.  And he’ll be an unrestricted free agent in summer 2010, which teams have been saving for for years.  Maybe the economy will have turned around by then?

That the Bobcats didn’t panic and overpay Felton probably says something about what Larry Brown and company think about Augustin as well: just one more year before he gets the keys.

Of course, the worst thing that could happen here is that Felton could finally flourish, start shooting straight and finishing layups, lead us to the playoffs… then be gone next summer.  But as a former Felton apologist who waited several years for him to “make the leap,” I reasonably sure that won’t be happening.  Felton is who he is: a $5 million point guard.