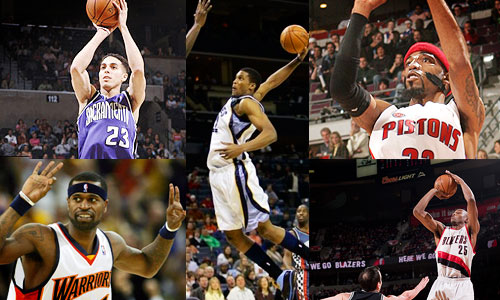 Despite a 2-2 record going into Friday night’s home game against Atlanta, the ’09-’10 Charlotte Bobcats find themselves in a desperate situation.  They can’t score points and the last time I checked, scoring points was somewhat crucial to winning basketball games.  As fellow Baseliner Dr. E has pointed out in his recaps and comments recently, as bad as the Charlotte Bobcats were on offense last year they are even worse this year, ranking dead last in point per contest at 79.8.  To put this into perspective, the 29th team (Milwaukee) is averaging 8 more points per game than the ‘Cats @ 87.7.

This isn’t breaking news as anyone who has suffered the great misfortune of watching the opening 4 games will have come to the same conclusion: This Team Needs to Make a Trade.

First off, a couple of GROUND RULES:

So without further ado…

1. The Charlotte Bobcats trade Gana Diop and Raja Bell to the Detroit Pistons for Rip Hamilton

Why Detroit Makes the Trade:
This one might seem lopsided at first glance.  Why would any team take on Gana Diop’s bloated, full-mid-level contract?  If the Pistons make this trade now, they’ll be close to $20 million under the salary cap this summer once Raja’s deal comes off the books.  Combine this with the fact that the team already has a nice young three guard rotation of Will Bynum, Rodney Stuckey and Ben Gordon and that makes Hamilton not only expendable but, by essentially shedding half of his contract, the Pistons will automatically put themselves in a situation where they can bid against anybody for any player come July.

Why Charlotte Makes the Trade:
On arrival, Rip would become the most dynamic and consistent outside shooter in team history.  His veteran leadership and ability to hit shots in the 2nd half are EXACTLY the kind of thing this team needs.  He’s a solid defender and knows Coach Brown’s system.  And even though Rip is already 31 years of age, his game looks to age well ala Ray Allen or Reggie Miller.  From a financial standpoint, the Bobcats are essentially trading away the albatross contract of a guy who is not playing (Diop) and receiving a bigger contract for a guy who will start.

Why Golden State Makes the Trade:
Are you kidding me?  S-JAX wanted out of Oakland a month ago and the team replaces an older disgruntled player with a younger, better one.  Warrior Fanatics will absolutely love Wallace in Oak-town.

Why Charlotte Makes the Trade:
There are already rumblings of Jackson coming to Charlotte but I don’t buy the Diaw rumor for an instant.  Boris is the most important piece currently on the Bobcats roster and everybody knows it.  In a situation where Stephen Jackson, a natural SF, comes to the Queen City, Gerald Wallace is the most likely man headed out of town.  While Jackson is a more gifted offensive player, the Bobcats would lose a lot defensively without Wallace.  Not to mention the fact that no one has been more loyal to the Bobcats organization than Crash over his 5+ seasons with the team while Jackson has just demanded a trade from the team that just gave him $35 million.
The reason that Charlotte makes this trade is because Turiaf is a HUGE upgrade at the backup PF/C spots and his toughness and rebounding will be needed when the team battles bigger squads like the Magic, Celtics and Cavs.
The other main reason for making the deal is money.  Claxton would come off of the books this summer and S-JAX’s cap number is lower in every year of his contract than what the team would be paying Wallace.
Bobcats give away a more talented player but get back quantity and cap space?  Sounds like a realistic Bobcats trade to me.

3. The Charlotte Bobcats trade Gerald Wallace to the Memphis Grizzlies for Rudy Gay and Marko Jaric

Why Memphis Makes the Trade:
Wallace is still young enough to grow with the Grizzlies’ young players (O.J. Mayo, Mike Conley, Hasheem Thabeet, Marc Gasol) and play right away with their veterans (Zach Randolph and Allen Iverson).  Perhaps more importantly, the trade would save the cheapskate Grizzlies at least $7 million next year as Rudy is likely to sign an extension that would pay him at least $9 million per season.

Why Charlotte Makes the Trade:
First off, let me say that I would feel absolutely terrible sending Crash into a situation like this.  He deserves better.  Unfortunately, it is a business measured in wins and losses and this trade makes a ton of sense for the Bobcats.  They get a younger, more skilled player in Rudy Gay to play the SF spot and would only have to pay Jaric one more season for their troubles.  With the salary cap potentially going even lower this summer, the ‘Cats could probably net Rudy (who’ll be a Restricted FA) for around the same money that they’re currently paying Wallace.

4. The Charlotte Bobcats trade Gerald Wallace to the Portland Trailblazers for Travis Outlaw and Martell Webster

Why Portland Makes the Trade:
The Trailblazers have been hot on Wallace for a couple of years now and there were multiple reports of a deal like this going down as recently as this past summer.  You could see why.  Wallace is the perfect fit for the Blazers in that he’s a reliable 3rd or 4th offensive option who doesn’t need plays called for him as he gets his points on sneaky post-ups, drives and put-backs.  He’s great in the open court and could be the final piece that puts Portland in the Western Conference Finals.

Why Charlotte Makes the Trade:
Surprisingly enough, Hollinger’s Analysis really liked this trade for the Bobcats, adding 9 wins to the Bobcats total.  Webster and Outlaw aren’t household names but they are both young and talented and could start for the ‘Cats immediately.  Both guys can shoot it and financially the Bobcats would come up WAY ahead, with Outlaw’s deal expiring this summer and Webster’s reasonable $5 million a year deal extending only through ’11-’12.  In an alternative scenario, the Bobcats could include Derrick Brown in the deal and ask for Nicolas Batum in exchange.  This gives the team insurance if Outlaw decides not to resign and adds yet another talented Frenchmen to the squad.

Why Sacramento Makes the Trade:
Money.  The once proud Kings are in dire financial shape.  The team is going nowhere on the court and (probably) somewhere else off of it.  Between now and the summer of 2013, the Kings owe Martin $45 million.  During the same time frame, Sacramento owes Udrih (a decent backup PG) $27.5 million.  Making this trade with the Bobcats would save the Kings around $60 million over the next four seasons and provide them with a young PG to run the floor with rookie phenom Tyreke Evans.

Why Charlotte Makes the Trade:
An additional $60 million in salary commitments.  Any chance in hell that Bob Johnson would say yes to a trade like this?  I say yes and here’s why: Kevin Martin is currently averaging 30pts per freakin’ game.  And he’s only 26 years old.  And this is not a fluke as Martin has averaged over 20pts per game over the past three seasons.  Sure, his defense doesn’t exactly scream “Larry Brown Caliber” but Kevin Martin would be the perfect medicine for a team desperately looking for some offense.  As bad as Udrih’s contract is, he’s not a terrible backup PG and combined with Felton, would make a nice platoon with Martin in the backcourt.
Oh, and Hollinger’s Analysis adds 13 wins to the ‘Cats win total if a deal like this were to go down.  Thirteen more wins is a good thing, right?

18 thoughts on “Let’s Be Realistic”