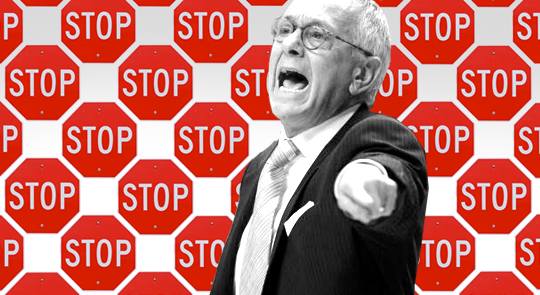 Fellow Baseliners, I knocked off work early, leaving loose ends untied, in order to bring you some observations and thoughts on the Bobcats open practice.

To summarize: I came, I yawned, I played Bejeweled on my phone.

Got there a bit late.  They had about the first 15 rows or so blocked off, presumably so the players could still curse without offending the young ears in attendance.  The rest of the lower bowl was surprisingly full of folks enjoying the free popcorn and soda.  The team was running full-court five-on-five at about 75%, roughly starters vs. second team (except with Ajinca in Chandler’s spot, and guys like DJ and VladRad did time with both squads).

As anyone who has ever read anything about Larry Brown would expect, he stopped the action about every 7 seconds to point out mistakes and demand perfection in every offensive set.  If I had the graphic design skills of my brethren here at the Baseline, I would have mashed up some picture of Larry Brown in practice gear with a big giant stop sign to lead off this post.  Alas…  (UPDATE: Photoshop added.  Thanks, D)

It’s ironic though, as Brown’s main issue with the replacement officials was that they stopped the game so much that no flow was ever established and he wasn’t able to fully evaluate his young guys.  I can identify.  I realize it’s practice, but still, would it have killed anyone to let the guys scrimmage freely for a few minutes for the fans?

So with everyone at least 15 rows back, and the seats full of murmuring people, you actually couldn’t hear anything that was being said down on the court.  I might have tolerated all the stoppages if Larry Brown had been wearing a mic and I could hear the teaching he was doing.

At about quarter til 7:00, people started peeling off.  Kids were either bored out of their minds or on the verge of a fit, no doubt due to the absence of Rufus.  A few minutes after 7:00, practice wrapped up and folks were invited to come down courtside for autographs.  I’ve never seen a player as seemingly excited to sign autographs as Derrick Brown.

A few other items: