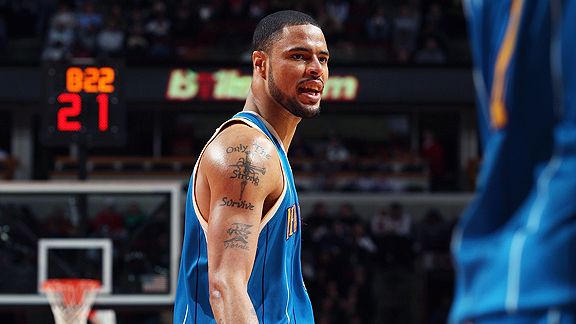 Proving the adage that the actual trades that go down in the NBA are not leaked to the media ahead of time, Marc Stein of ESPN is reporting that the Bobcats and Hornets are in advanced discussions regarding an Emeka Okafor-for-Tyson Chandler trade.  The Observer, via the AP, is reporting that it’s essentially a done deal and will be official tomorrow.  As of the time of this writing, no other players are reportedly involved.  The trade does work straight-up.

This one’s kind of a stunner, folks.  Though we’ve speculated a bit on Okafor’s status here at the Baseline, I don’t think any of us realistically thought he could be traded this offseason — mainly because of his contract, which looks like this:

In the current economic climate, there aren’t many teams that want to take on that kind of committment, especially for a player with a skill set as limited as Okafor’s.

And there’s the rub, one of the things that’s going to be debated extensively amongst Bobcats fans.  What kind of a player is/was Okafor?  His supporters will point to the double-doubles.  He has averaged one in each of his five NBA seasons thus far, a true rarity.  He’s also a good citizen.

But other (and in my opinion, more astute and critical) observers will recognize that he’s an extremely limited player.  He doesn’t bring much to the table on the offensive end, getting most of his buckets off dishes from Felton or putbacks.  He has never developed any semblance of a low-post game, and is completely useless outside of 6-8 feet.  Furthermore, he’s never seemed particularly dedicated to addressing any of these shortcomings, thus prompting the famous Larry Brown quip that Okafor gets and “A in stretching, Pilates, and Yoga” but needs to focus on getting an “A in basketball.”

And now for the other, and bigger, question that’s going to be debated: Even if you accept that Okafor is limited, that you’re not exactly going places with him, he’s still one of your main assets.  Can’t you get more than Tyson Chandler back for him?

Chandler is possibly even more limited than Okafor.  He’s taller and more agile, probably a better one-on-one post-defender.  Skillwise, that’s where the differences stop.  Chandler is equally as inept as Okafor on the offensive end, scoring mostly on lobs from Chris Paul and putbacks.  Like Okafor, Chandler has no low-post game of his own and no ability to hit a mid-range jumper.

Furthermore, Chandler is coming off of a miserable season in which he struggled mightily with ankle and toe injuries.  In fact, a mid-season trade to the Thunder was nixed when Chandler couldn’t pass muster with the Thunder’s doctor.  There has been speculation that ankle/foot/toe problems might continue to haunt Chandler in the future.

So sadly, we have to accept the reality that this deal is mostly about money.  The most important difference between Okafor and Chandler is that Chandler is only on the hook for one, maybe two more years: $11.8 million this year, followed by a player option for $12.7 million the next.

For the Bobcats, who are nowhere near contending for a top spot in the East and for sale to boot, the financial relief this deal provides will ultimately be a good thing.  It improves the propects for new ownership (which we need desperately) and will give the team some roster flexibility in the coming years.