By signing Allen Iverson, the Bobcats could salvage the upcoming season

I did a little math last night.  Nothing complicated like you’d see over at 82games.com, Queen City Hoops or with John Hollinger.  I’m not mathematically brilliant like those guys.  Just some basic addition.

If you take the Bobcats current top eight players Point Per Game averages from last season and add them up, you get 90.6 points per game.  Last season, the Bobcats finished 30th out of 30 teams in scoring at 93.6 (The League average was around 100 per game).

The Bobcats leading scorer from last season, Gerald Wallace, averaged 16 and a half points a game.  Diaw put up a career high 15.0 ppg after the trade from Phoenix.  Those are your two top offensive threats, Bobcats fans.  Are you as worried as I am?

It’s pretty obvious that the Bobcats could benefit from A.I.’s scoring presence and we’ve talked about that here before at length.  What a lot fans might not understand is how precariously close the team is to this year’s $69.92 million luxury tax level.
After the Chandler trade, the team stands at $59.84 million and this is BEFORE re-signing Raymond Felton and shoring up their backup PF position.  And since there’s no way Bob Johnson is paying luxury tax this year, the Bobcats will basically have to choose between re-signing Raymond or bringing in Iverson.

With such a dearth of scoring on the roster, I’m not sure if it’s even a choice.  The Bobcats need a scorer and Iverson is the last one out there on the open market.

Now, you could argue that Detroit, San Antonio and New Orleans all made the playoffs last season scoring less than 97 points per game.  The only difference is is that all of those teams have guys on their rosters who could drop 30 on any given night.  As much as I love Gerald and Boris, I wouldn’t put them into the scoring class of Rip Hamilton, Chris Paul, David West, Tim Duncan, Tony Parker or Manu just yet.

TURNING FELTON INTO AN ASSET 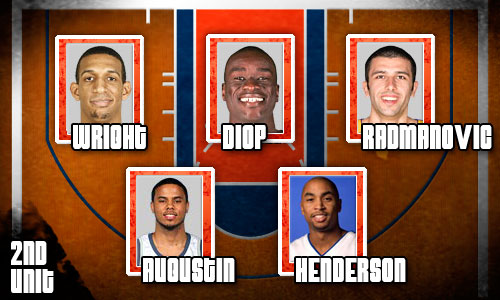 Signing A.I. to a two year full mid-level deal starting at $5.85 million would leave a little less than $2 million (via bi-annual exception) this offseason to sign a dependable backup PF.

Since Felton is a quality player who the Bobcats invested four seasons in, you wouldn’t want to just withdrawal the qualifying offer and renounce his rights when you could get something out of him in a sign-and-trade.

Of the three or so NBA teams that are currently without a decent starting PG, perhaps the best fit for Raymond would be Golden State.  Would Don Nelson be interested in dealing his least favorite Tarheel (Brandon Wright) for Felton?  The Warriors don’t have a “pure” PG and instead have two shoot-first, smallish SGs in Monta Ellis and Steph Curry (as well a roster full of guys who need shots).  Maybe Nellie would be interested in a team-oriented, super-quick point for his run-and-gun offense?

As long as Raymond doesn’t sign for anything above 20% of last year’s salary, he sheds the Base Year status and could be either dealt straight-up for a player like Wright (if the Warriors have a trade exception — I couldn’t find a definitive answer) or packaged with Mohammed or Radmanovic for Speedy Claxton’s dead weight contract.

What do you guys think?  How would you improve team scoring?  Is there a trade or two out there that could bring in a better scorer than Iverson while enabling the Bobcats to retain Felton?

66 thoughts on “Post-Chandler Trade: Is Iverson the Answer?”