The Bobcats might be better off withdrawing Raymond Felton’s qualifying offer and instead signing Andre Miller to a 2-3 year deal. 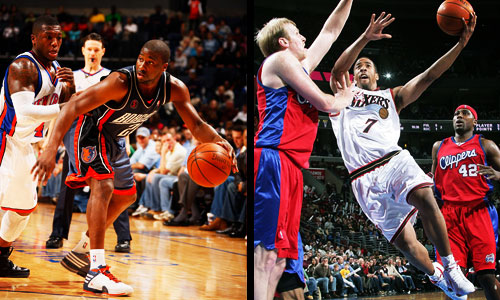 Raymond Felton and the Bobcats are “far apart” in contract negotiations.  The team is hoping to use Felton’s Restricted status, the weak economy and lowering cap as leverage in negotiations.  They would love to get him at or around the full mid-level exception (~$6.5 million per).  Raymond is apparently expecting something more than the full mid-level and a length of at least 4 to 5 years; potentially a 5-year $40+ million dollar deal.

So the obvious question is, “Is he worth it?“

The answer is that Raymond could probably command around $7 million plus per season if he was an unrestricted FA.  $8 million if a team was desperate for a young point guard and willing to overpay.  The better question is, “Is he worth it to the Charlotte Bobcats?”

Although there’s no reason to go over the organization’s financial nightmare again in this post, let’s just say that it’s not pretty.  Add to that the fact that the team already has it’s point guard of the future, DJ Augustin, on the roster on a rookie scale contract for the next three seasons.  If the team re-signs Raymond, they’ll more than likely be paying two PGs big money contracts in 2012 and 2013.  This just doesn’t make any fiscal sense.

Andre Miller is floating around out there looking for (maybe even begging) a team to sign him to a 2-3 year deal at the full mid-level.  Miller is a proven playoff point guard.  We all saw what happened when he took over the Sixers in the Iverson trade.  He’s crafty, a surprisingly adept open-court player, durable and a decent defender.  He’s also a “big” PG at 6’3″ | 200 lbs; which would be a nice complement to DJ and playing the two together would be a viable option in a pinch.

What’s even better is the fact that Andre’s contract would come off of the books at the exact time DJ would be up for a contract extension in ’12-’13.

All the Bobcats would have to do is agree with Miller on a deal and withdraw the qualifying off it made to Felton earlier in the summer.  The “trade” of Miller for Felton makes the team more experienced and more playoff ready while weakening a conference rival.  Makes perfect sense.