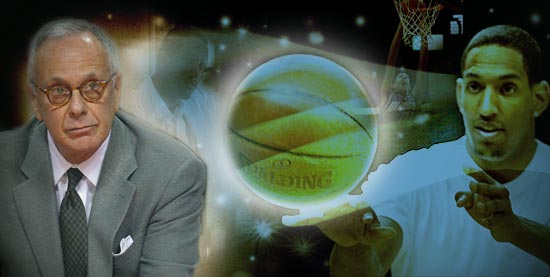 Much speculation and anticipation has rumbled amongst the foundation of hard-core Bobcats fans this off-season. So many NBA teams have made notable exchanges or additions that the current stagnant state of the Bobcats roster can only enhance the fanbase’s curiosity. As anxious as any other group of fans, the crew here at Bobcats Baseline has assumed several questions for the past couple of months.

Who will Charlotte sign? Who will be traded? How do the Bobcats keep up with the other mediocre clubs? While an answer to these questions could create headlines or at least drum up a bold reaction from a sports pundit, the Bobcats might not give us any such satisfaction.

Perhaps, the fundamental question that puts the off-season into focus would be this –
What roster position or positions do the Bobcats see as immediate needs?

After securing a reserve shooting guard with Gerald Henderson in the Draft, it seems that only one area of need will push the team to spend any more than they are already committed to drop on the next season. GM Rod Higgins has commented on the need of depth at the power forward position, but the club hasn’t made any drastic moves to overpay for a reserve.  Despite the reports from the team’s lone beat writer or speculative bloggers (like us), the Bobcats have really only made small mention of the power forward spot as a need for concern. So far, no one in the front office has gone into panic mode over signing a guy that will come off of the bench next year.

Could this be that the Bobcats might not really be that desperately concerned over filling out the back-up forward spot? It’s been suggested that Sean May could be reacquired to provide some depth behind Boris Diaw. Most of Charlotte’s fans would see this as a sad gesture toward improvement, but the team is definitely shopping with a tight budget. Additionally, some have assumed that the Bobcats were more likely to sign a D-Leaguer or an unaffiliated player that shows promise in Summer League play. A move like this probably won’t splash across the Sports Page, but it could fill their need just as much as an underachieving former NCAA Final Four Most Outstanding Player. So, the Bobcats are likely to spend little to no cash to cover that one hole that seems so important to all of their most analytical fans this summer.

This may sound crazy, but maybe the Bobcats don’t really have a need for depth at the power forward position. Larry Brown is known to be a bit fluid with his rosters, and he’s definitely open about changes that he wants from the organization. Brown has yet to make any publicly clamorous requests for that all so rare talent that can play against the league’s other back-up forwards. The lack of noise from Brown or the front office could mean that they simply already have their reserve power forward in Alexis Ajinca.

Larry Brown saw something in the 7-footer Ajinca that caused him to push the team to trade for an additional pick in the 2008 Draft  (No. 20) in order to acquire the rights to the Frenchman. After only appearing in garbage time throughout the first half of last season, the Bobcats sent Ajinca to the D-League to keep his game active over the spring. After suffering through the experience of the Sioux Falls SkyForce, we can assume that Alexis has put his focus on improving his game in any way that he can to stick on an NBA roster. With Larry Brown’s insight and the open ear of Boris Diaw, shouldn’t we expect some degree of improvement in the lanky man’s second season?

For the fans expecting a blockbuster deal or a huge free agent signing Alexis Ajinca isn’t likely the answer. Though, for the financially ailing Bobcats organization, the possibility of Ajinca filling out his body, his potential, and the team’s reserve forward need would sure sound like a great answer.

5 thoughts on “The Mystery of The Silent Off-Season”