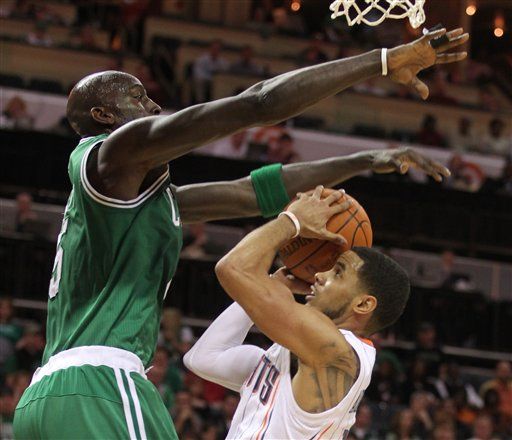 The Bobcats reached a new low in their 93-62 blowout loss to the Boston Celtics Saturday night at the Cable Box.  Quite literally the 63 points represents the Cats lowest output this season, and overall it’s hard to imagine things getting much worse than this.

You knew it was going to be a rough night offensively for the Cats, going up against Boston’s D.  Early on, though, it appeared as if the Celtics might have an equally rough night.  Both teams struggled to get and make shots as the Celtics limped to a 20-16 lead after the first quarter.

It’s one thing to shoot poorly and commit more turnovers than usual against one of the best defenses in the league; but the other stuff (being badly outrebounded, having shots blocked and missing free throws) is indicative of the deeper issues that are engulfing this team.

Rick Bonnell wondered if the Friday night loss to the Pacers was the “beginning of the end” for Larry Brown in Charlotte.  After tonight, you have to wonder if we’re closer to the end, period.

The body language is bad team-wide.  No one has any confidence in their offensive game.  The effort on the defensive end is not there.  The two leaders, Gerald Wallace and Stephen Jackson, are not leading.  Essentially, the Bobcats appear to have checked out on Larry Brown and each other.

Meanwhile, the Carmelo Anthony trade rumors have picked up again, and again the Bobcats are rumored to be on the periphery of the discussions.  ESPN’s Chris Broussard’s source describes Michael Jordan’s attempt to get Carmelo as an effort “to save the Bobcats’ season.”

In a similar vein, it’s been reported that in the wake of this blowout, Michael Jordan addressed the team in the locker room after the game.

The shakeup is coming soon, folks.

4 thoughts on “Bobcats Routed By Celtics”